Competing divorce lawyers fall in love in this romantic comedy.

In Laws of Attraction (opening Friday), Frances Fisher plays Julianne Moore's hot mama, Sara Miller, who's addicted to plastic surgery, younger men and rock 'n' roll. The 51-year-old actress &#8212; so memorable as Kate Winslet's gold-digging mother in Titanic &#8212; hopes her vivacious character will have a life beyond Laws. "I want to do a spinoff of Sara Miller with [Attraction's helmer] Peter Howitt directing," Fisher says excitedly. "That's what we were all talking about when we were on the set. I feel that Sara could be sort of a new way to look at what 50 years old actually is. [It is] not our mothers' 50." If her dream movie were made, however, she'd tweak Sara's over-the-top character traits to jive with her own personal outlook. "To tell you the truth, I wouldn't advocate plastic surgery and lip parties," she admits. "That was all a big joke. I'd probably want to tame that down a little bit.

The New York Post's "Page Six" gossip column gets a nice plug in the new romantic comedy Laws of Attraction (opening Friday), but the film's leading lady, Julianne Moore, is questioning the scandal sheet's accuracy. The Oscar-nominated actress cites one particular story from several years back that claimed she had been taken to the hospital from the set of Far from Heaven. "It said somebody had slipped me a piece of birthday cake that had a lot of sugar in it, and that I was highly allergic to sugar," she recalls. "So, they shut down production and rushed me to the hospital, where I managed to come out of my sugar coma and was back at work the next day." Moore insists there was "zero" truth to the item. "I don't know where it came from," she says, "Anyone who knows me knows that I have quite an affiliation with sugar and no allergies at all." Still, the down-to-earth thesp admits she was "flattered" the Post devoted 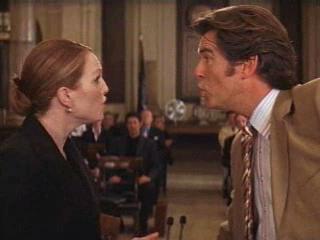