Alvin and the Chipmunks

Brothers Alvin, Simon and Theodore become recording stars in this blend of CGI-animation and live action. 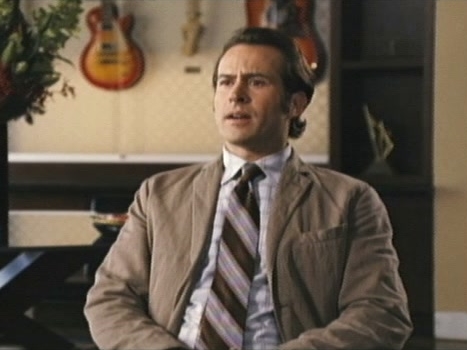 Alvin And The Chipmunks
2:17
Watch Now

2:17 Alvin And The Chipmunks

NCIS Scoop: Does a Leverage Star Have the Hots for McGee?

Leverage's Beth Riesgraf will guest-star on an upcoming episode of NCIS, TVGuide.com has learned. Check out photos of the NCIS castRiesgraf will play Maxine Edwards, an infamous online gamer who still has bad blood with her Marine ex-boyfriend, who cheated her in more ways than one. When his dismembered fingertips and teeth are discovered in a pickpocket's stolen purse, she naturally becomes one of NCIS' suspects.Luckily for Maxine, her gaming obsession piques the curiosity of fellow gamer McGee (Sean Murray), with whom she shares many common interests and a whole lot of chemistry...

You can't blame Jason Lee and Matthew Gray Gubler for being a little bleary Thursday night at the DVD release of Alvin and the Chipmunks. (Jason plays Dave, while Matthew voices bespectacled Chipmunk Simon.) Lee had just come from the set of My Name Is Earl, and was a bit fuzzy when asked what's in store when the show returns April 3. One tease he did spill was that guest star Alyssa Milano is back as his very pregnant wife in what looks like a '60s-inspired fantasy sequence. "Yeah, it's all sort of an imagined side of the story. You'll understand why when the season resumes," said Lee. Also dropping by the episode is, of course, Paris Hilton. "It'll probably be the most exciting thing on television since... forever," Lee smiled. "So look forward to it!" After a shorter-than-usual break, the Earl cast will start work on Season 4, which will air in the fall.Criminal Minds' Gubler is also working overtime on the CBS drama's set: "I haven't eaten all day," he explained as he munched on...

Will Smith's I Am Legend topped the weekend box office with a mighty $76.5 million haul, the biggest December opening ever (edging out The Lord of the Rings: The Return of the King's $72.6 mil) and a personal best for the former Fresh Prince. Jason Lee's Alvin and the Chipmunks placed second with $45 mil.Rounding out the top five were The Golden Compass ($9 million), Enchanted ($6 mil) and No Country for Old Men ($3 mil). Atonement, the most-nommed film for this year's Golden Globes, pulled in $1.85 million across 117 screens. Overall, the top 12 films were up 39 percent from the same weekend a year earlier.

My Name Is Earl's (Thursdays, 8 pm/ET, NBC) star on acting with the Chipmunks, why he spent time in jail and his plan of action if the strike continues. TV Guide: In your new movie, Alvin and the Chipmunks, you're without your trademark Earl mustache. Did losing it feel strange? Jason Lee: It was so liberating, and it only takes five or six weeks to grow it back. [Pause] People are just absolutely consumed with that &#8212; every time this comes up, there's, like, six questions about the mustache. In the '70s, with Tom Selleck on Magnum, P.I., it was the norm. It's funny how a mustache could be so ironic now. TV Guide: Your costars in the new movie Alvin and the Chipmunks are animated &#8212; how'd that work when you were shooting a scene? Lee:

Alvin And The Chipmunks

1 hr 24 mins
Tara has to go back to Parable, Montana, the place that made her the happiest, to move forward after a divorce.
2022 NR Drama, Family
Watchlist
Where to Watch

1 hr 30 mins
An orphan girl is sent to live with a brother and sister on their farm on Prince Edward Island in 1907.
2016 NR Drama, Family, Other
Watchlist
Where to Watch