The Thief, His Wife and the Canoe

Science Channel has picked up the new docuseries The Moaning of Life, featuring An Idiot Abroad star (and Ricky Gervais sidekick) Karl Pilkington in a new set of adventures. The Moaning of Life is part of a new slate of programs for the...

Ricky Gervais' New Netflix Sitcom Derek About the Elderly Is Sweet, Not Cruel

Ricky Gervais may have enjoyed being the "most feared man in Hollywood" when he notoriously offended many as a the host of the Golden Globes, but he insists that his new sitcom Derek, set in a nursing home, is "sweeter" than his usual fare. Derek, an original series to premiere on Netflix sometime this year, won't target the elderly with Gervais' sardonic wit. The show's humor doesn't lie in mocking them, but rather in taking jabs at the callous outside world and its marginalization of the elderly. It's certainly not an obvious topic for humor, but Gervais hopes that viewers will give the show a chance. "I think there's risk of people not watching it because of assumptions that it was cruel," he said at Netflix's winter TV previews on Wednesday. "There's risk that they don't get it. Or that they get it and don't like it. ... I haven't felt this excited and proud of a project since The Office. That's the truth of it."

U.S. viewers will finally get to see where Ricky Gervais and Stephen Merchant sent their dimwitted pal Karl Pilkington for a second trip around the world.

Ricky Gervais' pal Karl Pilkington has proven to be quite the useful Idiot for Science. The cable network is set to announce Thursday that it has secured the second season of hit series An Idiot Abroad. For season two, Gervais and Stephen Merchant are again sending the dimwitted Pilkington on a trip around the world &mdash; but this time to tackle a "bucket list" of things to do before you die. Unlike season one, which was produced first in the U.K. and later acquired by...

HBO has renewed The Ricky Gervais Show for a third season.The animated comedy series, based on the podcast of the same name, is voiced by Gervais, Stephen Merchant and Karl Pilkington, who riff ... 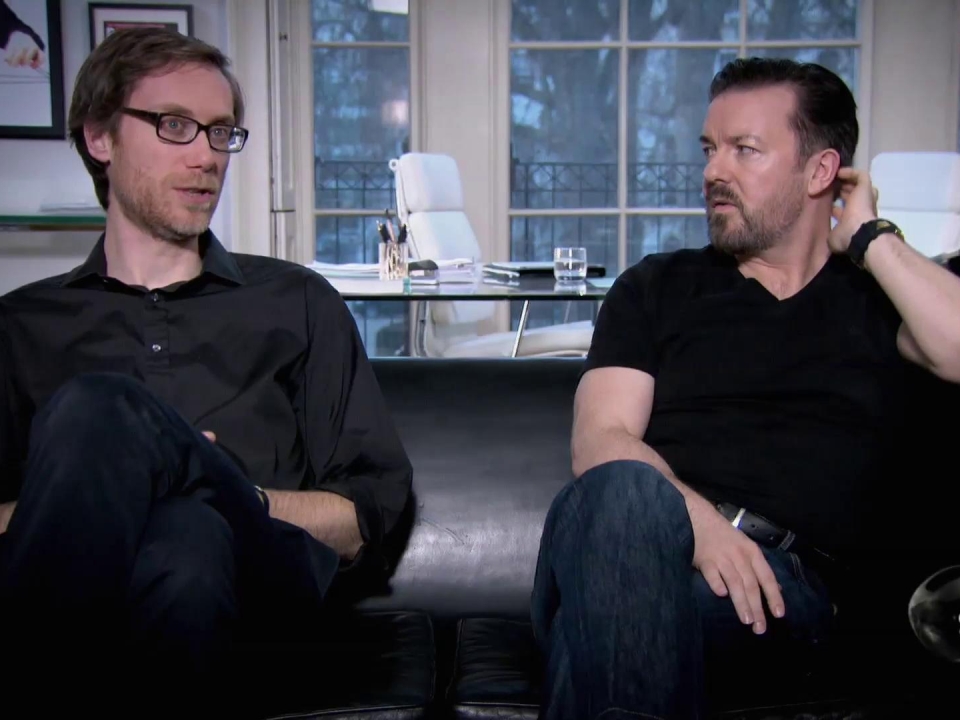