A federal agent goes undercover to infiltrate a group of Islamic terrorists in Los Angeles.

Michael Ealy Joins the Cast of The Good Wife

Call him Bond, Derrick Bond. FlashForward alum Michael Ealy has joined the cast of The Good Wife as Derrick Bond, a partner in the...

Jerry "Prolific Producer" Bruckheimer, he of CSI, Cold Case, Without a Trace and Amazing Race fame (and that's just TV), has secured a pilot order from longtime landing pad CBS for an untitled drama revolving around freelance treasure hunters, the Reporter reports. Ethan Reiff, who is penning the series with his Sleeper Cell cocreator Cyrus Voris, pegs it as an "A-class network version of an archaeology adventure show," and one grounded in (arti)facts by expert consultants. "It's not Indiana Jones for television," he says. "It's more grounded, more contemporary."

Question: You were right about The O.C. Ryan and Taylor are my new addiction. Tell me they're not doomed!Answer: I don't know about doomed, but things certainly will get more complicated when Taylor's French hubby Henri Michel (Sleeper Cell's Henri Lubatti) shows up to reclaim his wife and makes a startling revelation that could drive Ryan away for good.

Sleeper Cell On the very climactic...

Sleeper CellOn the very climactic finale of Sleeper Cell, Darwyn and the FBI are able to stop a massive attack on Dodger Stadium, as well as simultaneous attacks on Yankee Stadium and a baseball field in D.C. Phew! But they really left this miniseries open for a second installment. Farik and Co. can't go to trial without showing that the government condoned Darwyn's involvement with the murders, and "Steve," or Ilija, escaped without being captured. All in all, I did enjoy this series, but it is heavy stuff to watch, especially when paired with the nightly news. But the show wasn't all a downer. I did get to enjoy Ilija's rousing rendition of&nbsp;A Tribe Called Quest's&nbsp;"I Left My Wallet in El Segundo." Oh, but did mean old Farik really have to send tickets to Ga 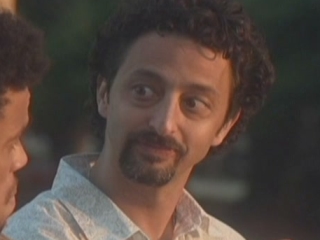