This week demonstrated that not everyone on TV is cynical. Mad Men's Don Draper finally came clean with his wife. A One Tree Hill investigation uncovered a cruel deception. Amazing Race's Mika had a panic attack. And it would take a real cynic to think that Shepard Smith wasn't being real in calling for more balance in Fox News Channel's political coverage. This Halloween, we're removing our masks and embracing genuine human emotion. Welcome to Top Moments: Cynicism-Free Edition.

This week demonstrated that not everyone on TV is cynical. Mad Men's Don Draper finally came clean with his wife. A One Tree Hill investigation uncovered a cruel deception. Amazing Race's Mika had a panic attack. And it would take a real cynic to think that Shepard Smith wasn't being real in calling for more balance in Fox News Channel's political coverage. This Halloween, we're removing our masks and embracing genuine human emotion. Welcome to Top Moments: Cynicism-Free Edition.

11. Best Twist: A vengeance-seeking Dexter and his dad (who, despite being dead, wears a seatbelt) follow the Trinity Killer home after he bludgeons a man to death. Just as Dexter is about to dose Trinity with a syringe, a woman and two kids greet him at the door with hugs and kisses. It turns out that Trinity isn't the loner Lundy thought he was. "He's like me," Dexter's suburban serial killer says.

Is Eastwick in danger? Check out our list of "bubble shows"

9. Best Moment of Truth: On One Tree Hill, leave it to Dan Scott to prove his son's innocence in the most outlandish way. He hooks himself up to a lie detector and answers ridiculous questions in a clearly false manner, and they still display as "true" on the monitor — the same monitor that corroborated Renee's love-child story.

8. Most Dependable: Never has an adult diaper been held in such high regard. On Grey's Anatomy, Lexi wears one to show her dedication during a 21-hour surgery (no time for bathroom breaks). Cristina is positively livid that she doesn't get to participate in a surgery that requires one.

7. Most Awkward "Back to You": After Fox News reporter Shannon Bream interviews the Republican candidate in the New Jersey governor's race, anchor Shepard Smith asks when she'll interview the Democratic incumbent. She pauses, and then explains with a tight smile that the network has made several requests for an interview. "Wow, thank you very much," Smith responds. "Shannon Bream. Wow. I didn't know that was about to happen. My apologies for the lack of balance there. If I'd had control, it wouldn't have happened."

6. Best Improvisation: Craig Ferguson's comic chops were put to good use when the power went out in the middle of Tuesday's taping of the Late Late Show. Ferguson, with the aid of a few funny faces and a very cleverly used flashlight, finished the show on a high note when he could have just wrapped early. We don't remember the last time we had this much fun with flashlights. With Halloween around the corner, the blackout couldn't have been more timely.

See other clips from The Late Late Show with Craig Ferguson

5. Best Death, Part 2: On The Vampire Diaries, Vicki, ironically dressed as a vampire at a costume party after just transforming into one, gets a little carried away sucking face with her boyfriend Jeremy. Just as the kissing segues into biting, Elena shows up to defend her little bro, which puts her on the receiving end of one of Vicki's bites. Stefan, realizing the new vamp can't control her feeding impulses, steps in and stakes Vicki.

4. Best Cry: Abby Rike, who lost her husband and two children in a car accident, volunteers to be the sacrificial member of the Black team and is sent home on this week's The Biggest Loser.

3. Dirtiest Dancing: And we thought the lambada was the forbidden dance. During the inaugural mambo marathon on Dancing with the Stars, Derek Hough and Joanna Krupa get down and dirty (at 2:22) on this chaste family show when Hough dips the model's head in between his legs and bobs it up and down ... over his crotch. "Not sure what that move was, Derek," host Tom Bergeron says in a hushed, golf-announcer voice. Oh, we do, Tom. We do.

2. Costliest Meltdown: On The Amazing Race, Mika, paralyzed by her fear of heights and water, freaks out — for 45 minutes — at the prospect of plunging down Dubai's six-story-high Leap of Faith waterslide. So she doesn't. Not even for $1 million. No, it wasn't cool of beau Canaan to grab her and attempt to push her down, but it's also not cool to be a grown woman, wearing floaties, sitting on the edge of a water slide, wailing, "Whyyyyy?" You mean like, "Why would you ever go on The Amazing Race if you're afraid of everything?"

1. Longest Time Coming: "You don't get to ask any questions," Betty Draper spits after discovering a shoebox filled with the details of her husband Don's secret life. On Sunday's episode of Mad Men, Jon Hamm channeled Don's quiet shame with a stunning performance that began defiant and powerful and ended crumpled and heartbreaking. 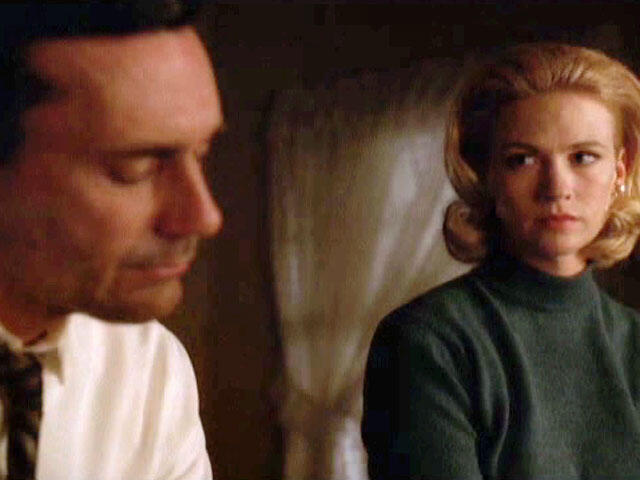