In a year that's already given us Fox's The Following and A&amp;E's Bates Motel, some might argue that we don't need another serial killer TV show. And they'd probably be right.But NBC's Hannibal isn't just another serial killer show. Spring Preview: Gets scoop on all the must-see new showsTaking characters from the Thomas Harris novels that inspired a film series that includes Manhunter, The Silence of the Lambs and Red Dragon, executive producer Bryan Fuller (Wonderfalls, Pushing Daisies) has created a sophisticated drama that doesn't glorify the violence of mass murder but rather examines the toll that hunting serial killers takes on the minds and souls of those who hunt.&nbsp;In fact, even though the show is named after Dr. Hannibal Lecter, who was immortalized as one of the greatest pop culture villains of all time thanks to Anthony Hopkins' Oscar-winning portrayal, the series &mdash; at least initially &mdash; isn't entirely focused on the cannibal in the three-piece suit...

Spring Preview: Gets scoop on all the must-see new shows

Taking characters from the Thomas Harris novels that inspired a film series that includes Manhunter, The Silence of the Lambs and Red Dragon, executive producer Bryan Fuller (Wonderfalls, Pushing Daisies) has created a sophisticated drama that doesn't glorify the violence of mass murder but rather examines the toll that hunting serial killers takes on the minds and souls of those who hunt. In fact, even though the show is named after Dr. Hannibal Lecter, who was immortalized as one of the greatest pop culture villains of all time thanks to Anthony Hopkins' Oscar-winning portrayal, the series — at least initially — isn't entirely focused on the cannibal in the three-piece suit.Instead, the spotlight is on our hero Will Graham (Hugh Dancy), a profiler who assists the FBI in tracking down serial killers because of his unique ability to think and feel like the murderers he's chasing. Although the character is known in Harris' Red Dragon as the damaged man who caught Lecter, the NBC series begins several years before the events of the book. Will and his boss Jack Crawford (Laurence Fishburne) first meetHannibal (Mads Mikkelsen), a Baltimore psychiatrist, when they bring him in to offer his insights on a killer who's mounting his young, female victims on animal antlers."The Will Graham character in the books hasn't really been accurately represented in the films because there's not enough real estate to accurately represent how complex he is," Fuller tells TVGuide.com. "There are little hints at his greater neuroses and personality disorders. So, I thought, 'There's an angle into this story that hasn't been taken yet.' There's something so unique in how crazy Hannibal is and something so unique in how crazy Will Graham is, that both of these men who are uniquely insane need each other to understand themselves."

It was that element of the script that hooked both Mikkelsen and Dancy. "I was quite reluctant from the beginning based on the fact that somebody has done [this character] before to perfection," he says. "Why should we go back and do something that somebody else has already done that good? ... But in the script there is kind of a bromance between Will and Hannibal that is quite new. I believe that Hannibal is quite happy to finally be able to make a friend."Adds Dancy: "Hannibal is really the only other person on the planet who is as smart about the things that Will does. So it's like the two greatest chess players of their generation sitting down together, and I think there's a genuine thrill in that for Will. They speak the same language. And even though Will would resist this idea, they do have a certain amount in common. The things that make [Will] tick are potentially quite dark."Indeed, the gorgeously shot pilot — directed by David Slade, who helmed the equally striking Awake pilot last season — features a visual flourish that takes viewers inside Will's mind. As he reconstructs crimes, he pictures himself, not the killers, committing the gruesome acts. Naturally, carrying those images around in your head becomes taxing.  "What you see to some degree is deterioration in Will," Dancy says. "I think that Will sees and rationally understands the importance and the value of stopping these people and catching them, but he doesn't get the sense of relief that maybe most other people would. I found it interesting that he's somebody who's really striving to do good, driven partially by the fear that he might be able to do bad."So, as Hannibal consults on Will's cases — and does some secret killing of his own on the side — he begins to encourage Will to open up to him. "It is a seduction and Will is seduced," Fuller says. "I think [Hannibal's] educating himself on how not to get caught. But also he genuinely likes Will Graham and Jack Crawford. He doesn't consider them rude men or betrayers of art and beauty like his victims. His victims are free-range rude, and if you're a pig of a human being, you're going to be his bacon. For him, looking at Will Graham, who has the ability to understand without judgment how horrible people do the horrible things they do, he feels that for perhaps the first time in his life there is the opportunity to make a friend who can clearly understand what he does and who he is."

Check out an exclusive first look at NBC's Hannibal

But don't worry, the show won't always be so lovey-dovey.  Although Mikkelsen's Lecter is blissfully understated, the Danish actor — best known stateside as the Bond villain Le Chiffre in Casino Royale — promises we'll see shades of the Lecter we know. "We can't detach totally from the films or the books because the character is what he is," he says. "Hannibal does not see himself as a psychopath, of course, and I don't either. He's much more than that. The closest I can come to a definition is that he's the fallen angel; he's Satan."

But Mikkelsen and Fuller agree that Hannibal also humanizes Lecter in a way viewers might not expect. "I was fascinated by the social Hannibal," Fuller says. "What are the types of relationships Hannibal Lecter would have as a free man in society? ... [I wanted] to see Hannibal as not necessarily always the antagonist and for him to have a genuine appreciation of the relationships in his life. ... There are some deeply, deeply moving scenes toward the end of the season where Hannibal allows himself to feel. He goes to such genuine emotional places and raw vulnerability. We're clearly not doing Anthony Hopkins or Brian Cox. I love those performances, but I didn't want to go near them."
Although the show doesn't necessarily go for quick-jolt scares, its murder tableaux can be gruesome. And while, unlike The Following, the show and its characters actively meditate on the cost of constantly witnessing such horror and violence, there's bound to be viewers who don't want this particular brand of drama on network TV. And Fuller says that's OK.

"As somebody who's been reading Fangoria magazine since I was 10 years old, I am a fan of horror," Fuller says. "I love The Walking Dead and the drama and the high stakes of that world and the romance that happens. But I also love it when a zombie's head explodes. ... Hannibal is a horror story, so I felt like we have a responsibility to honor the genre. "You can't buy a Victorian house and knock out all the walls and put in floor-to-ceiling windows and disrespect what it is by making it something else," Fuller continues. "We're also going to deliver a sophisticated human drama, but make no mistake, Hannibal Lecter is a horror character. We're going to push the envelope until the envelope pushes back. ... It's not about anything political. It's about what kind of house you are living in — and we happen to be living in a horror house."Hannibal premieres Thursday at 10/9c on NBC. For more, watch our video interview with Mikkelsen below. 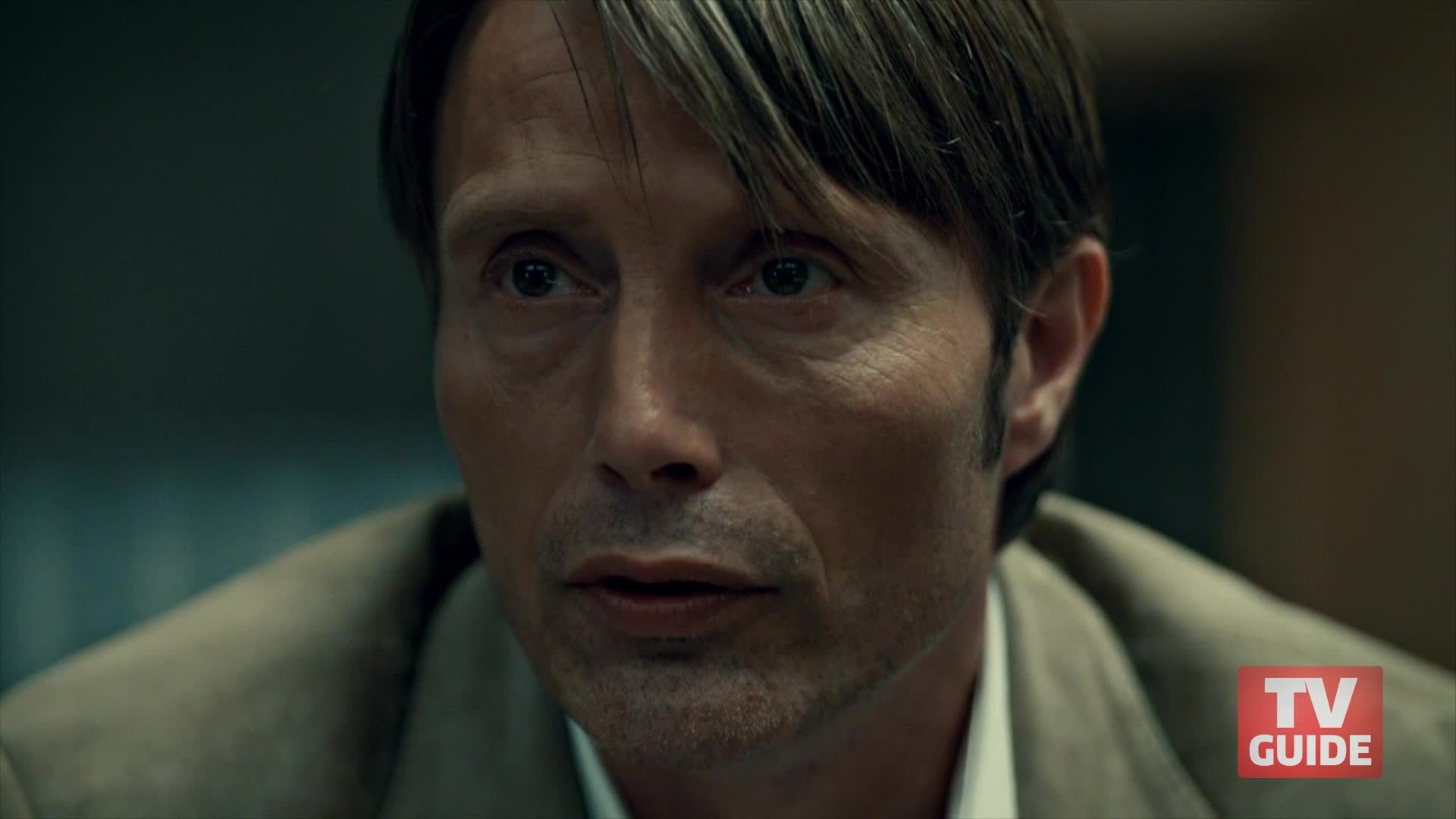