Changes are coming to TNT's&nbsp;Franklin &amp; Bash. When the fourth season kicks off&nbsp;Wednesday&nbsp;(10/9c), the legal comedy will feature new characters, a few major exits and a new look.&nbsp;Rachel (Heather Locklear) has left the firm, in addition to original cast members Pindar (Kumail Nanjami) and Carmen (Dana Davis), while Franklin (Breckin Meyer) and Bash (Mark-Paul Gosselaar) too have taken on new, more senior level positions within&nbsp;Infeld-Daniels. But don't expect our favorite slackers to button up. The duo says that, if anything, Season 4 feels like a return to form with Franklin and Bash as the renegade underdogs you're rooting for. Returning fall shows: Where we left off

When the fourth season kicks off Wednesday (10/9c), the legal comedy will feature new characters, a few major exits and a new look. Rachel (Heather Locklear) has left the firm, in addition to original cast members Pindar (Kumail Nanjami) and Carmen (Dana Davis), while Franklin (Breckin Meyer) and Bash (Mark-Paul Gosselaar) too have taken on new, more senior level positions within Infeld-Daniels. But don't expect our favorite slackers to button up. The duo says that, if anything, Season 4 feels like a return to form with Franklin and Bash as the renegade underdogs you're rooting for.

Returning fall shows: Where we left off

"The one thing we've always loved about the show is when we're the underdogs with our backs against the walls and we have to fight for the little man," Meyer tells TVGuide.com. "Suddenly, we'd become The Man and who do we fight against [when] we've won? So the good thing with this season is that we start off and we've gotten our asses handed to us and there are criminal implications against Stanton [Malcolm McDowell], who is our Yoda. So our Yoda is disbarred and we're back to fighting. We try to run the firm, but it's not what we do well, so sh-- hits the fan a couple times."

Get more scoop about the season and the big changes from Meyer and Gosselaar:

A new look
Gosselaar admits the show got away from its original design, but with a new director of photography, they're back on track. "I don't know where we went last year with the visuals of the show. I felt the lighting was very flat and the look of the show wasn't rich," he says. "The way the show works and how it was conceptualized is that it's a rich drama with two funny guys in it and they're unorthodox attorneys in a stuffy environment and that's what you want to see. It looked like sitcom last year and this year it's back to ... visually stunning."

New characters
With two sidekicks out, a different kind of comedy will come from Toni Trucks, who plays their new recruit Anita, and Anthony Ordonez, their new (and very odd) researcher named Dan. "When [Anita] comes to the firm, it's a job interview and she's very serious and ... when she meets us, we're high as a kite [and] she's thrown by it," Meyer says. "But as the season goes on, she begins to see the benefits to working with people like us and adapts to it." Adds Gosselaar, "She was hard in the beginning, but she becomes adorable." As for Ordonez, the guys say they loved messing with him on set since he was "super green." "He had one credit, like waiter No. 3 on The Good Wife," says Meyer. "He's like having [Seinfeld's] Kramer on the set; he made me laugh so hard." Adds Gosselaar, "With every line, he swings for the fences."

A return to the old Infeld
With their boss behind bars, it's up to Franklin and Bash to run the firm, but they're more than surprised to find that Infeld isn't so cooperative when they try to help him out. "We want to exonerate him and we know who screwed him over and who he's taking the fall for, but we also have to respect what he wants to do and that there are things he doesn't want to reveal," Meyer says. But let's not get too serious here. "His character goes back to Season 1 and is easy to get silly with and goes off on these long rants," Gosselaar says. "They go back to that fine line of having fun with [him] and keeping him our boss." Adds Meyer, "He's a mix of an emperor and Yoda. He gives great advice and then you're f---ing terrified."

A new partnership
Like their characters, both Meyer and Gosselaar took on new roles this season by becoming a directing-writing duo on Episode 7. "I was doing Men At Work at the same time and I didn't think I would have time [to write]," Meyers says. "When I found out it was [Gosselaar's directing debut] there was no way I couldn't. He's been waiting at the gate to direct for years and has been more than ready. We had such a good time that week." Adds Gosselaar, "They [actually] listened to us!"

Franklin & Bash returns on Wednesday at 10/9c on TNT. Watch a clip from the premiere: 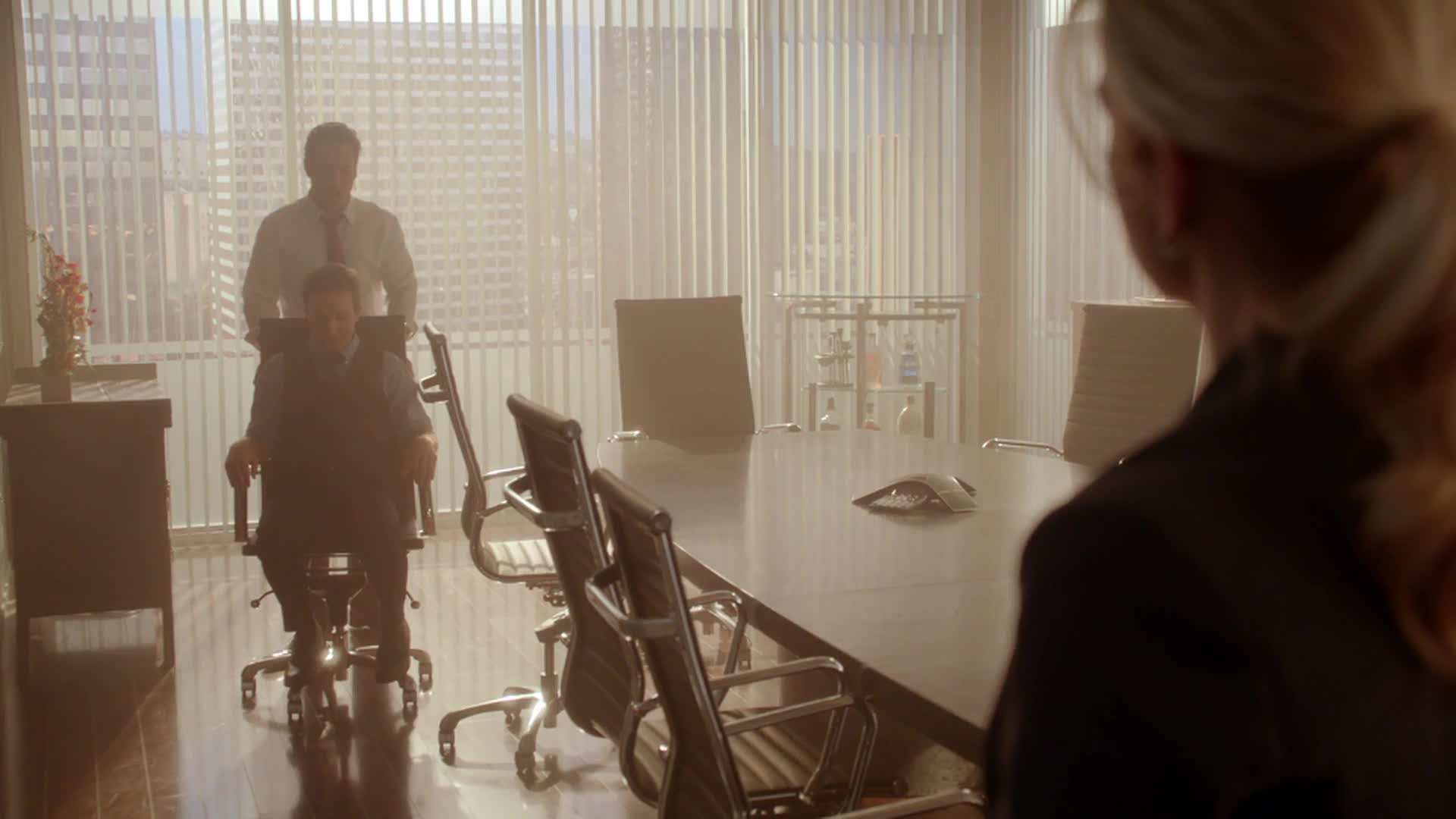