A reality-competition series in which hairstylists go head-to-head in challenges. The winning stylist receives $100,000, among other prizes. 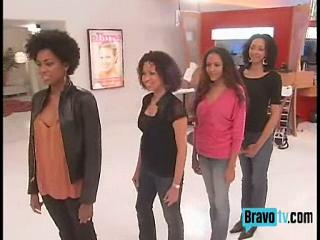 A Night Out With Tabatha Coffey

With a tongue every bit as sharp as her scissors, Tabatha Coffey is on a mission to save America's failing salons from themselves &mdash; one hapless hairdresser at a time. (Season 3 of Tabatha's Salon Takeover concludes on February 21.) We sat down with the feisty Aussie import over drinks at NYC's Beauty Bar for a peek at her &mdash; yep &mdash; many layers.

What the follicle? Have you heard of Hair Battle Spectacular? Well, count your blessings if you haven't because this showdown between extreme stylists is cheaper than a $2 weave and just as busted. Seriously, it's not even good bad, you know? Taking the best parts of Shear Genius and tangling it up with low-end production values, lame challenges and trashy contestants, the whole thing ends with ...

Liam Neeson to Sit Down for Exclusive Interview with Bravo

Liam Neeson, who has done few interviews since the death of his wife, Natasha Richardson, in March 2009, will appear on Bravo to talk about his new movie, Clash of the Titans. Liam Neeson walks first red carpet since wife's death Neeson, 57, will join host Andy Cohen on...

Winter Olympics8/7c NBC With a win on this track in last year's World Cup, America's Shauna Rohbock has to be considered a favorite in tonight's women's bobsled final. With partner Michelle Rzepka, she's got some momentum, having also won the final World Cup event of this season. Lindsey Vonn races again tonight in what has been her weakest event this season, the giant slalom; but her teammate Julia Mancuso won the gold in this race in 2006. There are two exciting events in short-track: Apolo Ohno skates in the prelims of the wild 500m men's sprint (he led wire-to-wire to win gold in this event in Torino); and the frenetic women's 3000m relay. "I feel like we have a really good shot at the podium in the relays," says U.S. skater Katherine Reutter. "We've become a very deep team."&nbsp; In freestyle skiing, China has been the dominant force in women's aerials; and in cross-country, the men's 4x10km relay final has traditionally been the sport's most thrilling race.Faces of America with Henry Louis Gates, Jr., American Idol, Shear Genius and Real World.

The cr&#232;me de la cr&#232;me of hairstylists on this season of Shear Genius snipped and pinned their way to the top three slots, but after some fancy finger-work on her final challenge, Dee Adames went home as this season's champion. "After all we've been through, it was just such a relief and amazing feeling," said the newly crowned winner. But the final challenge of telling a story through four different hairstyles on models ranging from teens to sixty was no easy task. "We only had 3 hours, so it was all about strategy and timing," explained Adames, "and the edgy rock star's hair was so coarse and thick that it was really hard to get it to come off polished." But between that rocker style and her Mama Red look, the Miami native pulled off the win. "My rock star story meant so much to me &#151; I have a dear friend who is a struggling musician and I know she is going to make it big one day." Reality living wasn't a cake walk for the stylist either. "I'm a single woman who only ...

10 Seasons
The experiences of a sightly group of young crew members who work on a private luxury yacht unfold in this reality series.
44   Metascore
2013 TV14 Travel, Reality, Drama, Other
Watchlist
Where to Watch

14 Seasons
A reality series that delves into the high-stress, big-money world of real estate in California. The show tracks the highs and woes of three young-gun agents as they try to close deals and negotiate with home sellers and buyers.
50   Metascore
2006 TV14 Reality, Business, Other
Watchlist
Where to Watch

The Real Housewives of Potomac

7 Seasons
The lives of six affluent women in Potomac, Marlyand, are charted in this reality show, an edition of the "Real Housewives" franchise. The show tracks the wealthy African-American ladies as they try to secure their spot in the prestigious Potomac circle.
2016 TV14 Reality, Family, Other
Watchlist
Where to Watch

2 Seasons
When the temperature drops, the drama heats up. This series follows some of Bravo's beloved "Summer House" and "Southern Charm" cast members and their friends during a two-week vacation at a ski house in Vermont.
2021 TV14 Reality, Other
Watchlist
Where to Watch

12 Seasons
Real-world dramas center on well-coddled women in the lush land of 90210 in this unscripted series, an entry in the soapy 'Real Housewives' franchise. Among the ladies: two former child stars who are siblings.
62   Metascore
2010 TV14 Reality, Other
Watchlist
Where to Watch

19 Seasons
A runaway runway-reality hit in which players compete to become a professional fashion designer. The winning prize includes $100,000 to start a clothing line.
78   Metascore
2004 TVPG Reality, Other
Watchlist
Where to Watch