Prequel to "Lonesome Dove" that details the adventures of Texas Rangers Gus McCrae and Woodrow Call as they protect settlers from Comanche Indians and attempt to rescue their Yankee captain from a ruthless Mexican bandit who is holding him for ransom. 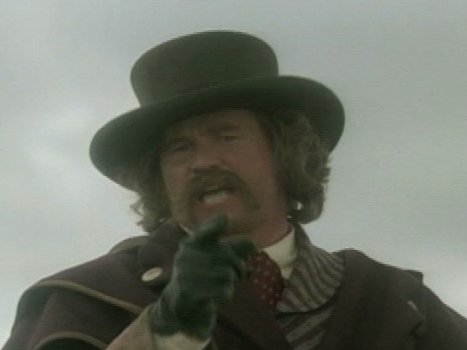 With roles in Dances with Wolves, The Last of the Mohicans and HBO's Bury My Heart at Wounded Knee, Wes Studi is a familiar face to fans of historical dramas. Tonight, the accomplished Cherokee character actor continues his hard-nosed portrayal of Comanche leader Buffalo Hump in Part 2 of Comanche Moon (9 pm/ET, CBS; it concludes tomorrow), the Lonesome Dove prequel that traces the early years of Dove protagonists Woodrow Call and Gus McCrae. TV Guide: You've appeared in many films about the struggles of Native Americans. What draws you to them?Wes Studi: I like the point of conflict, when people finally come to the point [where] they have nothing else they can do but fight. It happened in just about every one of the roles that I've played. There is quite the adrenaline ru

Talk about "I'll be back." Fox's Terminator: The Sarah Connor Chronicles on Sunday night premiered to 18.3 million total viewers and was broadcast television's highest-rated scripted series debut in three years among adults 18-49 and adults 18-34. (Among total viewers it was the highest in almost two years.) It was also Fox's highest-rated scripted series debut in over seven years among 18- to 49-year-olds (since Dark Angel, Oct. 2000) and in eight years in total viewers.On the other end of the time continuum, CBS' Comanche Moon averaged 15.75 million viewers on its first of three nights, the largest audience for any network TV-movie in more than two years.Lastly, lest anyone be rid the memory of the pathetic Globes news conference, NBC's Billy Bushy telecast was awarded with a mere 5.8 million viewers.

Premiering Sunday, Jan. 13, at 9 pm/ET, and then continuing Tuesday and Wednesday night, CBS' Comanche Moon miniseries &#8212; based on Larry McMurtry's &nbsp;best-selling Lonesome Dove prequel &#8212; follows Texas Rangers Woodrow F. Call (Karl Urban) and Augustus "Gus" McCrae (Steve Zahn) as they deal with the tensions of life in the Old West. TVGuide.com spoke with Urban (the Lord of the Rings films' Eomer) about his latest wild venture. Plus: The best sneak peek he could let slip regarding his role as Dr. Leonard "Bones" McCoy in the much-anticipated Star Trek origin film. TVGuide.com: What drew you to this project? Obviously, playing a young Tommy Lee Jones is not to be taken lightly.Urban: Yeah, well I didn't approach it like that. That'd be a mistake. I based my performance on the lite