It's hard to believe, but Kristen Kish forgot Last Chance Kitchen existed on Top Chef. "I thought I was done when I got eliminated," she tells TVGuide.com. "And I was fine with that. I took responsibility [for Restaurant Wars], but I also felt like I deserved to still be in it." Fortunately for the Boston-based chef, Last Chance Kitchen does exist, and she won five straight face-offs to return to the regular show. And unlike last season's LCK winner Beverly, Kristen made it all the way to the final and won it all, beating Brooke 3-1 in head-to-head rounds. What is she going to do with the $125,000? And what does she think of the new finale format? Find out below.

It's hard to believe, but Kristen Kish forgot Last Chance Kitchen existed on Top Chef. "I thought I was done when I got eliminated," she tells TVGuide.com. "And I was fine with that. I took responsibility [for Restaurant Wars], but I also felt like I deserved to still be in it." Fortunately for the Boston-based chef, Last Chance Kitchen does exist, and she won five straight face-offs to return to the regular show. And unlike last season's LCK winner Beverly, Kristen made it all the way to the final and won it all, beating Brooke 3-1 in head-to-head rounds. What is she going to do with the $125,000? And what does she think of the new finale format? Find out below.

VIDEO: Top Chef's Brooke and Kristen mix it up with cocktails

Congratulations!
Kristen Kish:
Thank you! It doesn't feel real. I don't think it will start setting in until a few weeks down the line.What was going through your head when they cast the last vote?
Kristen:
Shock. I think I froze for a minute. It was funny to watch it all play back yesterday because I really had no idea what happened. I didn't remember my reaction or anything. It was nice to see it actually happen. But I was just in shock the whole time.You swept all three of your rounds, 3-0. That's pretty crazy.
Kristen:
Yeah, I was surprised. When you get the vote of everyone, it's really a fantastic feeling. I'm always surprised when they like it and are like, "You're awesome!" I definitely was not expecting that. You never know what they're going to prefer. I was on pins and needles waiting the whole time.I was convinced it was going to go five rounds when they announced the format, but then it became obvious that there wouldn't be enough time in the episode for a fifth round.
Kristen:
Yeah, that's what people were saying. There were like seven minutes and we were serving the fourth course and there was another commercial, so it was like, 'That's the last round.' I also assumed we would go five, but I was hoping that that wouldn't be the case, especially when I won the third. But at the same time, I really wanted to put out dessert and so did Brooke. We worked hard on it.What was your dessert? Chocolate in a bowl?
Kristen:
Oh, God! [Laughs] F--- no! I did fennel pollen cake, candied fennel, olive oil powder and Meyer lemon.

What did you think of the format? A lot of fans didn't like it since you could tell who was going to win and we missed the planning and cooking process.
Kristen:
Yeah. I don't know. Maybe it should've been a little bit longer and they could've done a speed reel of how the dishes came to be, but I think overall it was a good idea. But obviously first-time things need some ironing out. Maybe it shouldn't have been by round. I thought the episode went great. It felt more stressful than it showed for sure.You said you practiced your snapper dish, so when did they inform you that this was the format?
Kristen:
They told us a few days before. We knew what we had to cook and how many courses and that we had to incorporate scallop and red snapper. But we didn't know that we would be cooking in front of people and that it would be head-to-head judging. All of that was a surprise to us.How did you pick your sous chefs? You got the third-, fourth- and fifth-place finishers.
Kristen:
We got a list of people who would be there since they didn't fly everyone out. After the last challenge at Craft, we flipped a coin and Brooke got to choose her first two and then I chose my first two. Then later on, we were informed that we could pick one more. I did Sheldon and Lizzie and then went back and picked Josh.You didn't pick Stefan? He could've been trying to sabotage Brooke by flirting with you.
Kristen:
No! [Laughs] He didn't! Brooke picked first and picked Stefan right off the bat, so it wasn't even an option for me.Would you have picked him?
Kristen:
Probably not. He would've just distracted you.
Kristen:
Exactly! Brooke did me a favor. [Laughs]I think a lot of people feared Josie would be on your team, but since you got to pick...
Kristen:
Yeah, obviously I wouldn't pick her. [Laughs] But no hard feelings!You said on Watch What Happens: Live that you're aware of the comments that you're Tom's pet. He didn't vote for Brooke at all in the finale, so that might be even more ammunition.
Kristen:
Right. There are going to be things that people say regardless of whether you win, lose or otherwise. Whatever. It's OK. People can think what they want to think. I know I deserved to be there and I deserved to win, and I think I proved even before [I got eliminated] that I deserved to be there.

What did you think of Brooke saying that she wanted to win to prove that she wasn't winning challenges because you were not there?
Kristen:
I was surprised that she said that because I didn't know that's how she felt. She's obviously an extraordinarily, amazingly talented chef and person. We're great friends. I don't think that was why she was winning at all. She was winning because she was doing a consistently fantastic job and would've probably beaten me if I had been there!I loved that you told Tom, "Thanks for having that Last Chance Kitchen thing." Why did you forget that it existed?
Kristen:
I don't know. I just did. You kind of forget when you're in that competition mode. ... And then it was time for Last Chance Kitchen, so I was like, "All right! Back in it." You won five in a row. Which one was most satisfying? Beating Josie or the last one?
Kristen:
Definitely the last one. That was the most important and I had to go up against two people who are both fantastic chefs.So you're going to Korea. What else are you going to do with the money?
Kristen:
Yeah, definitely going to Korea. I'd like to go in the fall. I know the weather is perfect then. And then I don't know. Let it sit somewhere and make money on its own. I'm not sure yet. You sounded unsure as to whether you'd open your own restaurant.
Kristen:
Eventually I will. I have more to learn. I definitely in no way think that I'm the best and greatest and think that I can go out and do that right now. I'm very aware of the fact that I'm relatively younger and I have more to learn from Barbara [Lynch]. What are you up to now? Back at Stir?
Kristen:
I'm going to head back to work. ... Maybe [I won't be] at Stir, but we have a lot of other different things in our company, so we'll see. I'd like to circulate around, but stick with [Lynch]. I love cooking for my guests. We'll see. Spend time with my family and friends who've been supporting me this whole time and do things for them that they've been able to do for me.Your family was absolutely adorable, especially your dad.
Kristen:
Oh, I know! [Laughs] I cried again when I saw it last night. He's adorable. He actually called me a couple days ago and said, "Kristen, are you going to send Lizzie and Josh and Sheldon a gift to say thank you?" I was like, "Aw, dad! Yes, I will." He's very sweet.Check out Kristen and Brooke making cocktails with us below. 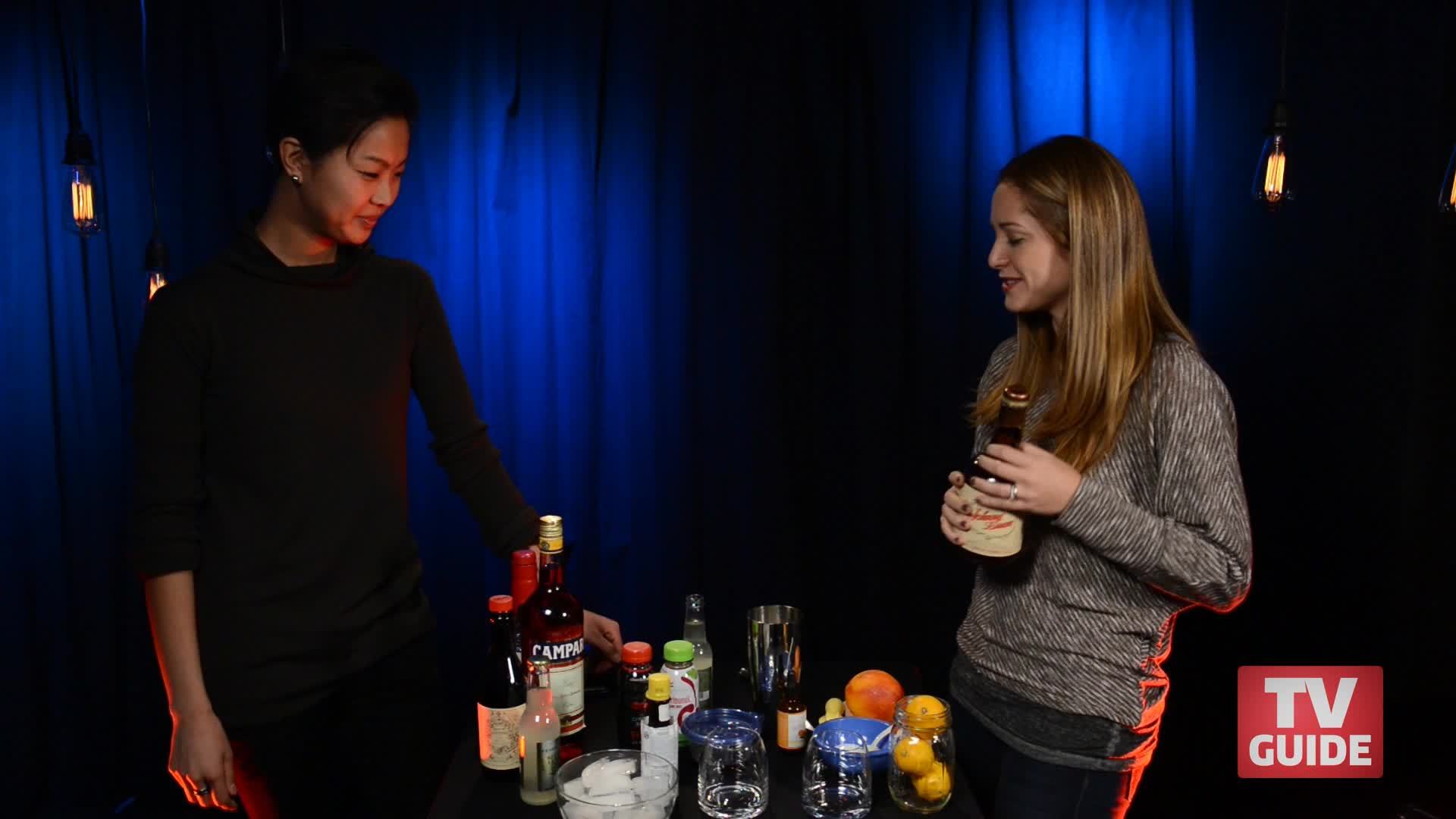