Opposites attract, right? Perhaps that's why&nbsp;The Big Bang Theory's Raj (Kunal Nayyar) has found himself in the middle of his longest and biggest relationship since, well, ever.The one-time selective mute has been dating Emily (Laura Spencer) since last season, which has come as a surprise to everyone involved. "All I knew in the beginning was that I was gonna do my one episode, which was one scene in the caf&eacute; with Amy [Mayim Bialik] and Raj," Spencer tells TVGuide.com.&nbsp;"Having it turn into us dating was ...

Opposites attract, right? Perhaps that's why The Big Bang Theory's Raj (Kunal Nayyar) has found himself in the middle of his longest and biggest relationship since, well, ever.
The one-time selective mute has been dating Emily (Laura Spencer) since last season, which has come as a surprise to everyone involved. "All I knew in the beginning was that I was gonna do my one episode, which was one scene in the café with Amy [Mayim Bialik] and Raj," Spencer tells TVGuide.com. "Having it turn into us dating was already exciting. And then for us to be actually committed, it's been so much fun and the most pleasant surprise."
The best TV shows of 2014
As is the case with most arcs on the show, Emily and Raj's relationship was not mapped out in advance. "It kind of happened organically," executive producer Steve Molaro says. "We liked the chemistry. We never plan anything, so it's been cool to see [what] roads we can take them [on], and to still see them together."
But what is it about Emily that has helped her stick around longer than Emily No. 1 (Katie Leclerc), who was deaf, and Lucy (Kate Micucci), who was even more socially awkward than Raj and dumped him via text? Being a total weirdo. Between her affinity for the macabre, tattoos and getting turned on by horror movies, it goes without saying that Raj has probably never met another woman quite like her.
"They're different. I think that's why they work. She's a creepy weirdo!" Spencer says with a laugh. "I'm assuming Emily has never dated anyone like him. I think she's amused by his quirks and seeing the benefit of somebody who has a different type of personality than she has, and vice versa. She likes his nerdiness. All I know is, when we're doing the scenes, Kunal and I just enjoy each other. I see that reflected in their relationship. I love in the prom episode that we were both getting a kick out of the drama and being together and giggling off to the side. You can tell there's something deeper there, not just superficial [attraction]. Obviously, he's excited that he's dating Emily. I think there's equal excitement from both ends. They enjoy each other's oddities."
Spencer — who also recurs on Bones as squintern Jessica Warren (she'll appear as a Jessica Rabbit-esque club singer on the show's Hitchcock-inspired 200th episode on Thursday) — also believes Emily is unlocking new sides of Raj with her eccentricity, something anxiety-stricken Lucy wasn't able to do. Then, he was the constant protector and nurturer who literally tried to talk Lucy out of a cage. Now? He's previewing House of a 1000 Corpses with the guys because Emily loves it. "The fact that Raj can even speak to another woman without the influence of drinking was a major turning point for him, and I think now you see him finally embracing that, and with a person who makes him laugh and is outgoing," Spencer says.
Adds Molaro: "I think Emily represents something new and exciting for Raj, and he's at a point where he's comfortable and somewhat ready for a relationship. He's still the same Raj, but there's confidence."
The best movies of 2014
Frankly, the only downside of their relationship so far is the fact that she and Penny (Kaley Cuoco-Sweeting) hate each other because the latter once crawled into bed with Raj. "The Penny drama, that whole story line surprised me," Spencer admits. "I wasn't expecting that, but it's also exciting for me to play this whole different dynamic with Kaley. I think you get to know Emily more through that too — the fact that this thing bothered her. I hope they can put it all behind them. That'll be fun to have all four girls interacting together. They can all eat takeout!"
A future girls' day could very well be in the cards when Spencer returns to The Big Bang Theory early next year. Due to a last-minute scheduling change, her next appearance on the show was pushed back, but Emily and Raj are still going strong. "They needed to focus on some other plotlines, but I will be coming back," Spencer says. "They called me and said, 'Don't worry, we love you. We're having you back soon. We just want to let you know. Sorry for the changes.' I think anything with her and Raj is possible. I didn't know they were going to make Emily remotely creepy at all. What if they're engaged? You never know!"
The Big Bang Theory airs Thursdays at 8/7c on CBS.
On the Set of The Vampire Diaries! Get behind-the-scenes secrets from the holiday episode: 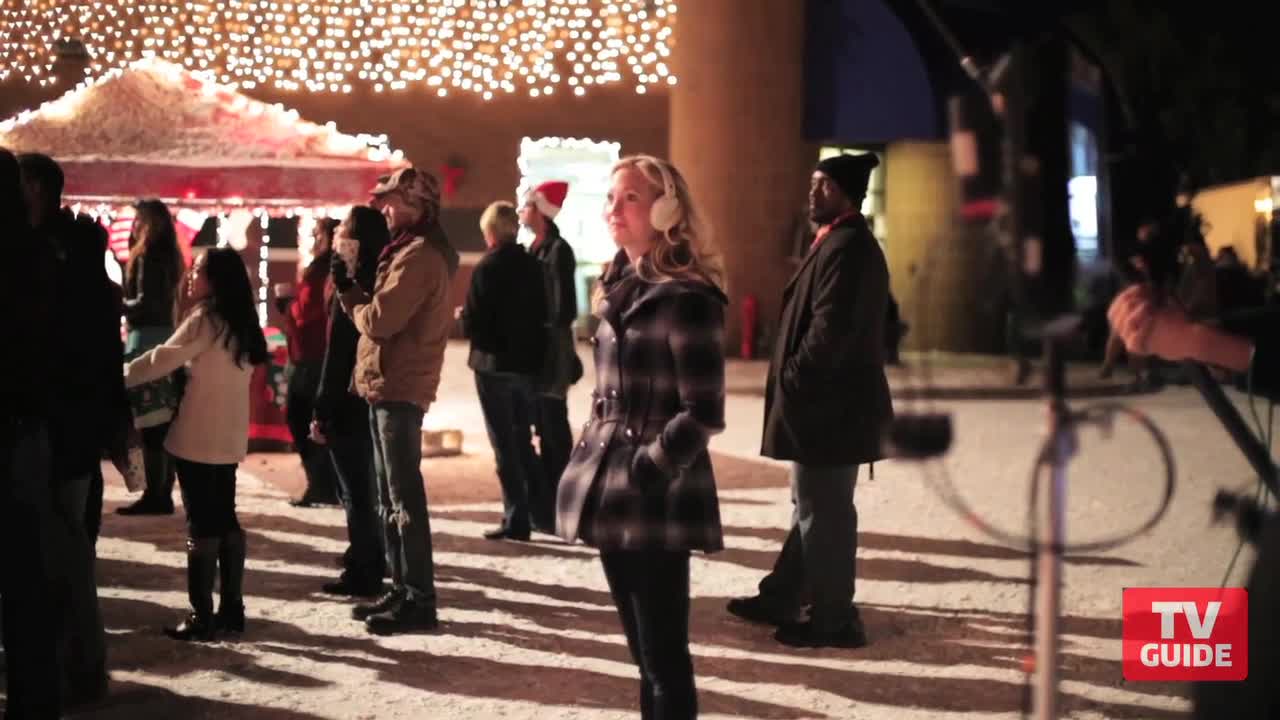