Agents of SHIELD Producer on Hive's Agenda and FitzSimmons' Future

Plus: How dark will Coulson go?

If only what happened on Maveth stayed on Maveth. Because when Agents of SHIELDreturns Tuesday (9/8c, ABC), our heroes will still be reeling from the consequences of what occurred in the winter finale - from Coulson's (Clark Gregg) cold-blooded murder of Ward (Brett Dalton) to Fitz (Iain De Caestecker) shooting Will. And who could forget the creature, whom we now know is Hive, crawling inside Ward's corpse and escaping to Earth?

TVGuide.com spoke to executive producer Jeff Bell about the new Ward, Coulson's dark side, and all of our other burning questions ahead of the midseason premiere.

Coulson always considered himself of a higher moral caliber than his enemies. Now that he crossed that line and killed Ward, how will he grapple with that?
Jeff Bell:
I think that's a big part of Coulson's arc this season. ... I think the hand [Coulson lost] works as a metaphor, and then using that hand to literally kill your enemy is something he'd never done before that way. So there will be all kinds of consequences. Not just giant plot consequences. ... As Coulson continues to evolve as a character, what are the consequences of doing something like this? Does it send you over the edge into more actions like this? Do you question yourself? Do you try to redeem yourself? How he reacts to that situation is a big part, for us, of the back half of the season.

Will we continue exploring the darker side of Coulson?
Bell:
I think we have to. I think it would be dishonest not to. Whether that means he goes darker or not, those questions and how others react to them as they learn what happened will be a big part of the Coulson story.

Will we see the rest of the team find out what happened between Coulson and Ward
Bell: We now that Fitz was there, so Fitz knows. Whether Fitz tells others or whether Coulson comes back and tells others is something I think we should play in the series, so I'm not going to tell.

Coulson gave Fitz quite a look in the midseason finale. How should we interpret that
Bell: That's the beauty of a look as opposed to a line of dialogue. Was that, 'Oh my god. You caught me'? Or,' If you tell anybody, I'll kill you'? Or, 'I can't believe what I just did'? Or, 'You'd have done the same thing'? Those are all things I think you could read into that glance, and that people are taking it so many different ways is wonderful.

What should we expect now that Brett Dalton is playing Hive?
Bell:
Is it Ward 3.0? I don't know what version of Ward this is; we've put him through a lot. But it's fair to say it'll be a different flavor of Ward. But if you look back to [the winter finale], whatever was in Will had knowledge that Will had. He was able to recognize Fitz and fool everyone through that episode. So it's safe to assume that it's not just this Hive thing walking around in Ward's body, but [he] seems to have memories or access to that part of Ward. So hopefully it's an interesting, more complicated new version of Ward. I think what people will see in the first couple [episodes] in particular will be wonderfully surprising.

Hive has the memories of Ward, but does that mean Hive can also feel empathy and draw from the good parts of Ward?
Bell: Sure. I don't know if I would use the word empathy. I think Hive has a larger agenda than what Ward would have an agenda for or what Will would have an agenda for or any other person. So the fact that Ward had an agenda towards SHIELD may not be important to Hive. He may be aware of it. He may use that. He may lean into that, but he may also have a separate purpose than what Ward was working on before he passed away.

Hydra has been working to bring Hive to Earth for a very long time. Now that they've finally achieved this goal, how do the results match up with their expectations?
Bell: We literally play that question. We literally get into, 'OK, the thing that you've wanted for forever, the thing that your entire organization has been devoted to, is here. What did you want to happen? What did you expect to happen? What's really going to happen?' And I think those are questions for Malick (Powers Boothe) and Hydra, and we really lean into those very early in the back half of the season. Because sometimes when you get what you wanted, it's not what you thought you wanted. And other times you're like, 'This is better than I could have expected!' But, you know, you did basically summon some sort of thing that many people worship as evil, so I'm not quite sure what you're expecting.

How much are we going to learn about the history of Maveth and the former civilization there?
Bell:
I think we'll learn some about that. I think we're more interested in Hive and his impact on that and what that might mean for us here on Earth than a lot of details about the backstory of that planet.

What will the formation of Secret Warriors look like going forward?
Bell: As more and more Inhumans are happening, and we're trying to get them, Hydra's trying to get them and there's opportunity for us to lean into some of the comic book storytelling about the Secret Warriors. We've got our own Daisy Johnson (Chloe Bennet) and some of our own characters, but we're trying to pay homage to that and tell compelling stories. As we go forward and tell deeper into the season, we also see some factions within that. Some people think this is a wonderful thing. Some people think this is a terrible thing. That story's going to be coming much more to the front during the back half of the season. 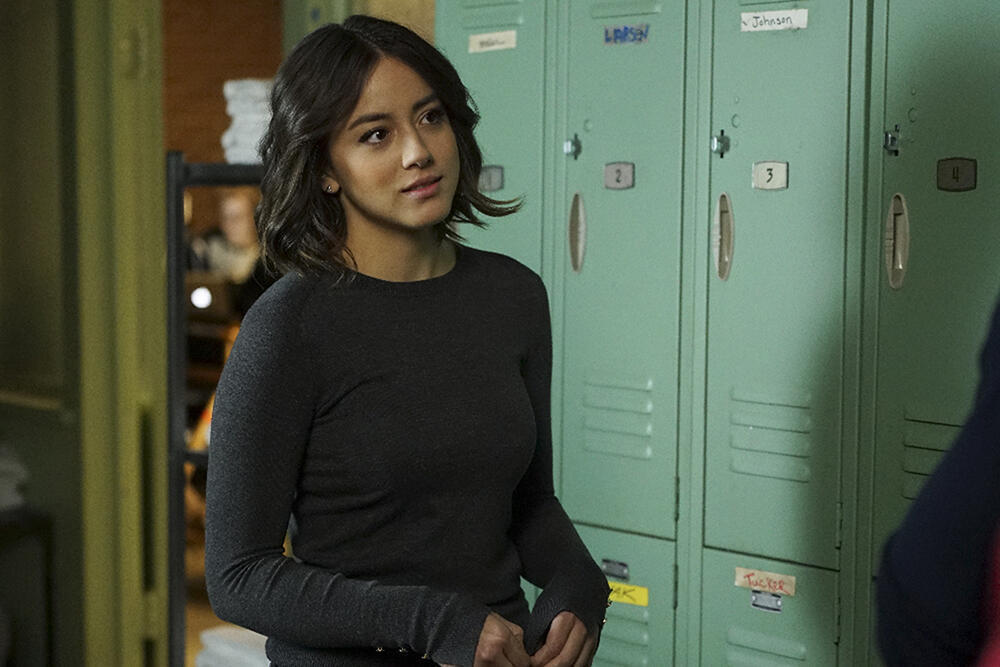 I loved seeing Mack (Henry Simmons) leading the group in the winter finale. Will there be more opportunities to see him take on a leadership position going forward?
Bell:
We get to see a lot more of Mack, not just in leadership, but as a character. ... His arc from the end of last season until now has been really interesting and we lean into that as we go forward.

What is the state of FitzSimmons' relationship like when the show returns?
Bell:
[Fitz] has to come back and say, 'I'm sorry, Simmons, but the man you love was possessed by an evil thing and I had to kill him. I'm sorry.' That seems like a really juicy place to start. Well, what does that mean? Does that mean we're not going to kiss? Does that mean I'm really angry at you? Does that mean I understand? Those are all good questions to play going forward and I promise we will play all those questions. What do you want to happen?

Simmons (Elizabeth Henstridge) helped Andrew (Blair Underwood) escape, but then he slaughtered all those Inhumans. Is she still carrying guilt for letting him out?
Bell:
Oh, I would think so. I think she has remorse and guilt and second-guessing. I don't think what she did was wrong. You'll see right off the bat that she's dealing with those issues.

Should we expect Andrew to return this season?
Bell:
Andrew or Lash? We all love Blair Underwood, so anything's possible.

Can we expect any tie-ins with Captain America: Civil War?
Bell:
We try to reflect one another. Some movies lend themselves more to that than others, depending on the kinds of stories they're telling. So I think if you're watching SHIELD and you watch that, you'll go, 'Oh, I see.'

Agents of SHIELD returns Tuesday at 9/8c on ABC.