Tom and Jerry: Robin Hood and His Merry Mouse

Sherwood's famous outlaw Robinhood needs Jerry's help to steal from the rich and give it to the poor. Tom's mission is to serve the king by stopping Jerry from succeeding. 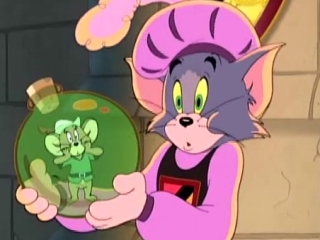 1:02 Tom And Jerry: Robin Hood And His Merry Mouse

Tom And Jerry: Robin Hood And His Merry Mouse

1 hr 32 mins
A cat belonging to a miller's son can turn into a man with the magical help of some fancy footwear. In human form, the cat is cunning and works to help his owner by telling everyone that he is a marquis. Based on the fairy tale "Le chat botté" by Charles Perrault.
1988 G Fantasy, Kids, Other
Watchlist
Where to Watch

1 hr 46 mins
A child successfully wishes that his teddy bear could come to life, but he gets more than he bargained for when the stuffed animal follows him into adulthood and complicates his relationship with a beautiful woman.
62   Metascore
2012 R Fantasy, Comedy
Watchlist
Where to Watch

1 hr 43 mins
Peter Weir (Fearless, Witness) directed this paranoia fable, scripted by Andrew M. Niccol (Gattaca). Truman Burbank (Jim Carrey) is the most famous face on television-only he doesn't know it. He is the unwitting star of a non-stop 24-hour-a-day documentary soap opera. Every moment of his life is recorded by concealed cameras and broadcast to an international audience. Truman's friends, his family, and everyone around him is an actor-and he's a prisoner in this made-for-tv paradise. How can he escape? Filmed in Florida and LA.
90   Metascore
1998 PG Fantasy, Comedy, Other
Watchlist
Where to Watch