Mickey Mouse plays "The Sorcerer's Apprentice" in this Disney classic featuring music by Bach, Beethoven, Tchaikovsky and others performed by the Philadelphia Orchestra under Leopold Stokowski's direction. Narrated by Deems Taylor.

It's a little less than four weeks away, folks: Season 5 of Fox's American Idol premieres Jan. 17 with a two-hour special introducing a slew of the crooners who aspire to be the next Kelly-Ruben-Fantasia-Carrie. Once again making the calls (and leading the catcalls, when need be) is the judging triumvirate of Randy "You were pitchy, dawg" Jackson, Paula "Fabulous!" Abdul and, yes, Simon "Awful, just awful" Cowell. This new round of Idol 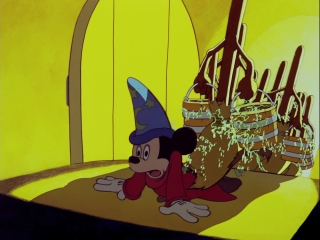