An obnoxious private detective who specializes in recovering lost pets is hired to find the Miami Dolphins' missing mascot, and ends up searching for some of the team's players after they go missing as well. 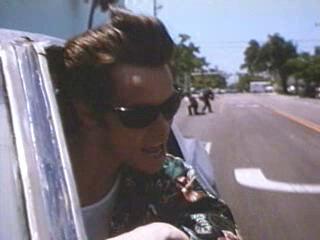 What's Leaving Hulu in May

The bell tolls for Ace Ventura

Per Variety, Nancy Drew's Josh Flitter has been tapped to star in Ace Ventura 3, playing (an assuredly off-camera) Jim Carrey's son, who fancies himself a pet detective for the 7th-grade set.... Brittany Murphy, Jason Lee, Giovanni Ribisi, Jim Broadbent &#151; pausing for a breather amidst indie overload... OK &#151; Tim Roth, and Lili Taylor are signed on for The Other Side, a comedy in which a grad student toiling for a scientific institute on a remote island discovers a community of people who are hiding a secret about a tragedy that took place years before. Sure the title isn't "The Others Side"?.... All the Boys Love Mandy Lane, which was set to spook moviegoers this Friday, has had its release pushed to early 2008 &#151; ostensibly to get a wider run.

1 hr 26 mins
Sarah Jo (Kristine Froseth), an innocent twentysomething, lives in the orbit of Hollywood with her eccentric mother and sister. As she yearns for something more in her life, she finds herself falling into a tempestuous, illicit affair with her much older employer. Sarah Jo must then navigate the intricate web of power, desire, and grief as she struggles to find herself. Lena Dunham writes and directs the comedy. Co-starring Jon Bernthal, Luka Sabbat, and Scott Speedman.
52   Metascore
2022 R Drama, Comedy, Other
Watchlist
Where to Watch

2 hr 21 mins
A special agent called Harry Tasker skilled in languages and counter intelligence has been leading a double life all his married life. His wife believes that he works for a computer company until she becomes involved with a con artist who likes seducing married women....
63   Metascore
1994 R Comedy, Action & Adventure, Other
Watchlist
Where to Watch