She's got a lot more to do this time around

Sabrina Spellman (Kiernan Shipka) is back on Riverdale, and this time she's got quite a bit more to do than just helping Rivervale Cheryl get her soul back. In Sunday's episode, "The Witches of Riverdale," the witch is taking a little trip from Greendale to Riverdale to help with a pretty major problem. In the last episode, Percival Pickens (Chris O'Shea) ended his show of biblical plagues by killing a few of the town's most prominent first-borns. That included Archie (KJ Apa), Jughead (Cole Sprouse), Toni (Vanessa Morgan), Fangs (Drew Ray Tanner), and Nana Rose (Barbara Wallace), so of course Cheryl (Madelaine Petsch), Betty (Lili Reinhart), Veronica (Camila Mendes) and Tabitha (Erinn Westbrook) are all pretty desperate to get them back. But to do that, it requires a resurrection (or five) and a young witch who happens to be an expert in that field.

In an exclusive sneak peek at the episode, Sabrina introduces herself to the ladies of Riverdale and explains a bit of what she's been up to since the finale of Chilling Adventures of Sabrina, in which she died. 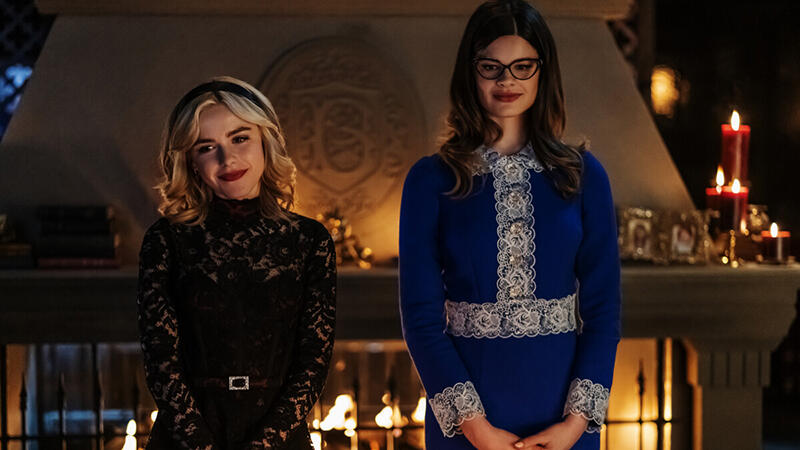 "After I passed away a few years ago, my boyfriend Nick Scratch sacrificed himself to bring me back from the dead as a way to balance the scales. Ironically, that experience of being resurrected is what made me decide to specialize in necromancy."

Of course, Veronica's first question is what happened to Nick, and Sabrina explains that he had to stay behind in the sweet hereafter, which is where she's also pretty sure Archie, Jughead, and the rest of the dead firstborns are. They have less than a day to complete the resurrection, and to do that, six witches are needed. They only have three, so Betty, Veronica, and Tabitha are all about to make their supernatural powers officially witchy.

Shipka told TV Guide that it was "so fun" to bring her magic to Riverdale. "Honestly, I kind of just felt like I was back at home," she says. "I was just so happy to bring a little bit of witchery into Riverdale. It felt absolutely right. It's something I've always wanted to do, and this episode, the second I read it, I was so excited to do it."

We're not going to tell you more, but just know that Sabrina's appearance is much more substantial this time around, and we most certainly noticed that mention of balancing the scales. If we've learned anything from both CAOS and 13 years of the Vampire Diaries Universe, it's that you can't bring someone back from the dead without major consequences, and there's literally no way of telling what kinds of crazy consequences might be in store on a show like Riverdale.

Riverdale airs Sundays at 8/7c on The CW.