A partially scripted, partially improvised sitcom about the nerdy owner of an Ohio grocery store. After inheriting the business from his late father, he tries to control the dysfunctional staff and promote a positive working environment, while also taking on a prissy corporate competitor who's out to seize control of his store. Among his employees: a womanizing butcher; a naive customer-service rep; a fiery produce worker; and a wacky stock boy.

Watch This: Hulu's Improv Western Quick Draw Is a Refreshing Change of Pace

There haven't been a lot of comedy westerns save&nbsp;Blazing Saddles,&nbsp;Three Amigos&nbsp;and&nbsp;Wild Wild West,&nbsp;none of which were released in the new millennium. Thankfully, Hulu breathed new life into the genre with its original series&nbsp;Quick Draw, an improvised comedy from&nbsp;10 Items or Less'&nbsp;John Lehrand&nbsp;Nancy Hower. Quick Draw&nbsp;follows Sheriff John Henry Hoyle (Lehr), a bumbling Harvard grad who is so confident in his intellectual superiority he even boasts about graduating 327th&nbsp;in his class. Now living in Great Bend, Kansas, Hoyle attempts to introduce forensics to the local rubes, who include the dim-witted Deputy Eli (newcomer Nick Brown), the brazen brothel owner Honey (The Sopranos'&nbsp;Allison Dunbar) and the mopey Undertaker Vernon Shank (Cougar Town's&nbsp;Bob Clendenin).

Exclusive Video: What a Harvard Education Will Get You on Hulu's Cowboy Comedy Quick Draw

Is the Old West ready for a Harvard-educated sheriff? On the Hulu original comedy Quick Draw, which launches online Monday, Sheriff John Henry Hoyle (John Lehr of TBS' 10 Items or Less) will set a small Kansas town on its ear with his new-fangled ways and talk of eczema.

Who needs the grimness and drama of Oz? The upcoming Crackle Web series Jailbait offers a more humorous take on life behind bars. TVGuide.com has your first look at the 10-webisode comedy starring John Lehr (TBS' 10 Items or Less) as Oswald "Ozzie" O'Connor, &nbsp;a guy who accidentally buys drugs in a sting operation and is now facing nine months in prison. It's quite an adjustment for his sunny personality, and he naively observes, "Prison is just an uncomfortable environment and they're very successful at it."

Inauguration 20099:30 am/ET ABC, CBS, FOX, NBC, PBS as well as numerous cable networks (BET, CNN, FOX NEWS, MSNBC, among others) In case you've forgotten (fat chance), today is Inauguration Day, and while it might be chilly in Washington, many folks around the world will have very warm feelings as Barack Hussein Obama takes his oath of office on the Bible Lincoln used in 1861. Read on for previews of Be the Change: Live From the Inaugural, Fringe, Real Housewives of Orange County and 10 Items or Less. 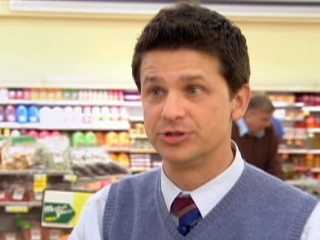