A young girl and three strange companions embark on a quest in a magical realm in this miniseries update of the classic L. Frank Baum tale.

Snoop's Music Video PremiereThe D.O. Double G is back with a hot new music video, "Sensual Seduction," but we can assure you that you've never seen him like this before. In his ode to pimps past, the Doggfather suits up in what is quite possibly the most absurdly retro video of all time. We're talkin' the whole nine here &#151; sequins, disco balls, even Snoop rockin' full-on chops. Classic.Watch it now!A Twister Hits Wisteria Lane! Watch out, ladies, there's a tornado a-brewin' and it's headed straight for Wisteria Lane. Looks like everyone's going to have to put all those secrets and catfights on hold and take cover. ABC is calling this the "best Desperate Housewives episode ever." That's a bold statement &#151; now let's see if they can back it up this Sunday! Watch it now!Sci Fi's Tin Man Goes Way Beyond the RainbowBrace yourselves for what looks like a seriously insane journey through the Outer Zone (O.Z.). Based on the L. Frank Baum epic tale, Tin Man gives you all the goodnes...

The four travelers seem so familiar. One lacks courage, one has no brain, one lost his heart, and the other was brought here by a tornado. But as these ragtag pals traipse through the forest in search of their destinies, they don't break into song or meet sweet, helium-voiced witches in big, poufy ball gowns. They are in the O.Z. &#8212; aka the Outer Zone &#8212; a dictator state where bullets fly, people are horridly tortured and pros&shy;titutes peddle instant gratification on the roadside for "reasonable rates." This isn't L. Frank Baum's nightmare. It's Tin Man (Sunday, Dec. 2 through Tuesday, Dec. 4 at 9 pm/ET), a radical Sci Fi Channel adaptation of his beloved book The Won&shy;derful Wizard of Oz. And though it was filmed near Vancouver amid idyllic sur&shy;roundings &#8212; snowcapped peaks, placid lakes &#8212; make no mistake: This six-hour, three-night redo wants to slap us out of our over-the-rai

Actor Neal McDonough (Traveler) based his decision to take on the lead in Sci Fi's anticipated Oz-take, Tin Man (premiering Dec. 2 at 9 pm/ET), on atypical reasons: "For me, having two babies now and the most beautiful wife in the world &#8212; wonderful wife, best friend, everything &#8212; I had to think about that," he told TV Guide at the media premiere. "Every decision I make now is 100 percent about my family, for (Tin Man) Wyatt Cain it was the same thing and he had it taken away from him." McDonough and his wife, Ruve Robinson, have two children, 2-year-old Morgan and 6-month-old Catherine. Tin Man definitely has its roots in L. Frank Baum's classic, but with a decidedly darkly modern take as follows a young girl named D.G., played by Zooey Deschanel, who finds herself in "The O.Z." or the Outer Zone. It was McDon 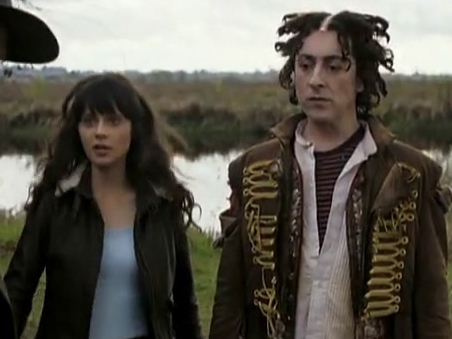