The extraordinary tale of a simple man who unwittingly becomes involved in some of the key moments of the 20th century. 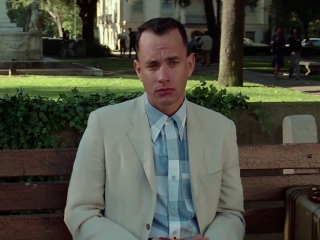 CBS to Air Forrest Gump, Titanic, and More Classics In Sunday Night at the Movies Lineup

You know you want to

Jimmy Fallon&nbsp;had a banner week (again) this week, playing beer pong with&nbsp;Diane Keaton&nbsp;and going head-to-head with&nbsp;Emma Stone&nbsp;in an epic lip-sync battle. Tiny hamsters ate tiny burritos, and Hulu Kids unveiled its first original series. Also, the&nbsp;DuckTales&nbsp;theme was refashioned into a sultry R&amp;B song, and someone wondered what&nbsp;Forrest Gump&nbsp;would have been like ifWes Anderson&nbsp;had directed it. Check out those clips and more in our weekly roundup of the best online&nbsp;videos:

Think of it as "CSI: USO," if you will.&nbsp;When he's not solving crimes as Det. Mac Taylor on CSI: NY, Gary Sinise can often be found touring with the USO, entertaining U.S. service members around the globe with his Lt. Dan Band, the rock group named after his salty Vietnam-veteran character in Forrest Gump. On Sunday, Sinise lands in Washington, D.C., to cohost the National Memorial Day Concert (airing at 8 pm/ET, on PBS), featuring performances by Josh Turner, CeCe Winans, Natalie Cole and the National Symphony Orchestra. TVGuide.com spoke with Sinise about his impassioned work with the troops. TVGuide.com: You're cohosting the National Memorial Day Concert for a second time. What brought you back?Gary Sinise: The first time I did [the concert] was [two y