An epic six-hour drama depicting the global power struggle between the U.S. and the Soviet Union, told from the viewpoint of CIA and KGB spies. The series spans four decades, from the dawn of the Cold War in the 1950s to the downfall of the Soviet Union in the '90s. 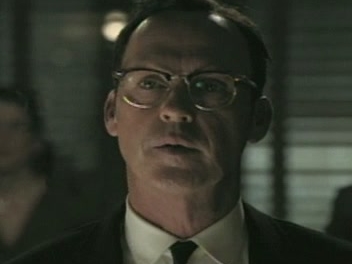 Harvey Torriti aka The Sorcerer

Alfred Molina Shares Intel About The Company's Next Twists

One CIA mole down, one to go? On Night 1 of TNT's The Company, Alfred Molina's Harvey Torriti made clever use of a few&nbsp;"Barium meals" to suss out a deep-placed snitch within the spy group's ranks. If only that were the end of their problems. As the series &#8212; executive-produced by Ridley and Tony Scott &#8212; resumes this Sunday at 8 pm/ET, the action weaves in a Hungarian uprising and the Bay of Pigs debacle, all while a second mole flies under the radar. TVGuide.com spoke with Molina about&nbsp;the twists and turns ahead. TVGuide.com: What brought you to this project? Was it the pedigree of the Scotts?Alfred Molina: That didn't hurt, but when I received the script and they told me who and what was involved, it just struck me as a really exciting thing. The script was terrific and it was a wonderful part. I was very, very happy to get involved. TVGuide.com: Are you an espionage buff at all?Molina: A little bit. I'

&#149; Sunday night's premiere of The Company, TNT's three-week miniseries about the Cold War CIA, averaged 2.9 million total viewers &#151; 66 percent of whom were age 50 or older, Variety notes. In comparison, TNT's Nightmares &#38; Dreamscapes mini did 44 percent better in its July '06 bow, while the cabler's Saving Grace and Heartland opened to 6.4 and 4.3 mil, respectively. C'mon, people, it stars Batman, Robin and Doc Ock!&#149; ABC Family's Fallen returned to 1.7 and 2.3 million in its Saturday/Sunday installments.&#149; Kimora: Life in the Fab Lane premiered Sunday to 335,000 viewers, more than doubling Style Network's typical tally.

Despite having more than a dozen films under his belt at the time &#8212;&nbsp;from the serene (Circle of Friends) to the bombastic (Batman Forever) &#8212;&nbsp;the gig that Chris O'Donnell credits with putting him in The Company, TNT's three-week, six-hour miniseries about the early CIA (premiering Sunday at 8 pm/ET), was his turn as a dreamy (though not McDreamy) veterinarian on Grey's Anatomy. "I had a fantastic time doing it, and I think I got a good 'pop' off it," O'Donnell says, fondly recalling his run as Meredith's onetime paramour, Finn. "I've known [executive producer] Ridley [Scott], and we've talked in the past about working together. When they were

3 Seasons
A thriller centered around the search for two sisters who have been kidnapped by a truck driver on a remote highway in Montana. Private detectives Cassie Dewell and Cody Hoyt join forces with Cody's estranged wife and ex-cop, Jenny Hoyt, to track down the missing girls.
54   Metascore
2020 TV14 Drama, Suspense, Other
Watchlist
Where to Watch

5 Seasons
A crime drama that chronicles the exploits of the New York office of the FBI.
57   Metascore
2013 TV14 Drama, Suspense, Other
Watchlist
Where to Watch