Two celebrity-contestant teams compete in a word-association game, with the winning pair given the opportunity to play for a $1 million grand prize.

Summer Heights High10:30 pm/ET HBO Series creator Chris Lilley's bravura performance as not one but three characters made high school seem like more fun than it probably was. Tonight's first-season finale features his typical over-the-top spins on his chief drama queens, Mr. G and Ja'mie, as they hilariously hog the spotlight in, respectively, a pulsating musical and the Year 11 formal. Read on for previews of Dog Whisperer Nick News with Linda Ellerbee Million Dollar Password and The Sound of Music.

Secret Millionaire8 pm/ET FoxMillionaires work anonymously &mdash; and for the minimum wage &mdash; alongside folks they don't ordinarily see in their corner offices in this feel-good reality series. Read on for previews of Million Dollar Password, Celebrity Rehab, Faith Hill, Joy to the World: A Soundstage Special Event and LA Ink.

And to think, we thought Reeg was gonna take a minute to relax with only one job. Nope, the daytime talk personality is back to his old ways of doing double duty by hosting the newest game show, Million Dollar Password. The revamped '60s game show couples celebrity players (such as Rosie, Neil Patrick Harris and Betty White) with contestants as they utilize their inner thesaurus to win lots of cash. Watch it now! | More online videos

Password, the vintage game show from the 1960s, 70s and 80s, returns as Million Dollar Password Sunday night (8 pm/ET, CBS). Regis Philbin &#8212; who appeared on Password Plus in the early 1980s as a celebrity clue-giver &#8212; is your new wordsmith. Like the classic versions of the game, celebrities will be paired with civilian contestants and will have to think alike to pocket prize money. Unlike the classic versions, viewers will have to hold onto their hats to keep up with spiraling tension. "We put a clock on the rounds to speed up the game," said executive producer Vincent Rubino. "Instantly there's tension building and there's a horse race that builds between the two teams." The celeb/contestant duos compete to guess "passwords" based on one-word clues at a frenetic pace. At various points, the t 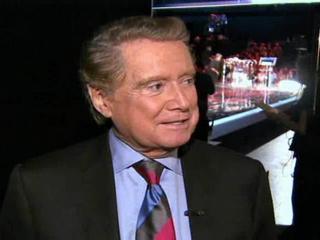