Zaftig Kirstie Alley (as herself) tries to mount a TV comeback in this broad self-parody. She also cocreated and co-executive produces the series. 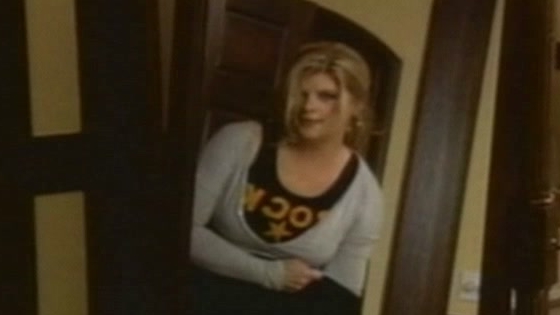 In what would be her first network series since 2000, ABC is close to picking up a new comedy pilot starring Kirstie Alley, Deadline reports. The Manzanis, a multi-camera comedy, is described as a new take on Roseanne and would star Alley, 60, as an opinionated wife and mother who...

The biggest TV story of the day? The brief tumble Kirstie Alley and her partner Maksim Chmerkovskiy took on last night's Dancing with the Stars. Maks appeared on Good Morning America Tuesday, as a loop of the stumble played on screen, to explain himself (it boiled down to a charley horse and, "Oops!"). Everyone loves a good fall, but this one wasn't spectacular...

When Kirstie Alley stepped into the lead female spot on the hit sitcom Cheers, her fearless, bawdy, neurotic energy thwarted all predictions that she'd never fill Shelley Long's shoes. She even earned an Emmy. Since then, Alley has continued to catch the world off guard by segueing into feature films, both arty and mainstream (Deconstructing Harry, the Look Who's Talking movies), headlining popular post-Cheers series Veronica's Closet and making a name for herself as one of the most unapologetic of Scientology's brethren. Then, when her weight ballooned at age 53, she used her indomitable spirit to turn her bathroom-scale struggles into a new branch of her career: She's been a Jenny Craig spokesperson; invented her own weight-loss program, Organic Liaison; starred in a semiautobiographical Showtime sitcom, Fat Actress; and to show what it's like to be an overweight celebrity single mom of two teenagers &mdash; William True and Lillie Price &mdash; she welcomed a reality-TV crew into her hectic home for A&amp;E's Kirstie Alley's Big Life.

It's the season of the lookers, the fighters, a rapper, a Super Bowl MVP and a former Fat Actress &nbsp;&mdash; but not a one-time candidate for the U.S Senate. Emmy winner Kirstie Alley (Cheers) leads the cast of celebs who'll kick up their heels for Dancing With the Stars' 12th season, which begins March 21 on ABC. "We've wanted Kirstie from Day 1," says executive producer Conrad Green. "She's enormously winning and an absolute hoot." Check out photos of the Dancing With the Stars Season 12 contestants She'll be going toe-to-toe with one of the most popular boxers of all time...

After Jenny, Kirstie Alley Signs on with Team Oprah

Former Fat Actress Kirstie Alley has inked a development deal with Oprah Winfrey's Harpo Productions. The actress, who recently left her role as spokeswoman for Jenny Craig, is discussing various TV projects with Oprah's company, including a possible talk show, says Variety.Alley has appeared on Oprah's talk show several times over the years, including her famous disrobing after her weight loss, in which she strutted her stuff in a bikini. She says she hopes to create "something totally fresh" from the development relationship. Alley added, "I'm very open with what I've been through in my own personal life, and nothing &#151; I mean nothing &#151; is off-limits for me to talk about."In addition to her TV plans, Alley also recently said she may be developing her own weight-loss program, promising to make a "fat America" fit.The deal with Harpo isn't Alley's first step toward a possible talk show. The actress reportedly had inked a deal with another company in the past, but it never s...

11 Seasons
The escapades of a hard-partying Chicago father of six and his tight-knit but dysfunctional brood, who muddle along with adult supervision provided by the eldest daughter.
70   Metascore
2011 TVMA Drama, Comedy, Other
Watchlist
Where to Watch

7 Seasons
A hospital worker deals with a substance-abuse problem, an active love life and a tough job.
75   Metascore
2009 TVMA Drama, Comedy, Other
Watchlist
Where to Watch

1 Season
Created for Colorado State University's The Collegian in 1992, Brett Merhar's cult comic strip Free for All achieved nationwide prominence when it was syndicated by King Features beginning in 1998. The TV-cartoon version of the property was every bit as hilariously tasteless and mean-spirited as the original strip, if not more so. Merhar himself provided the voice of protagonist Clay Zeeman, a twentysomething slacker who became a millionaire after suing a fast-food restaurant. The episodes focused on the friendship between Clay and his "loser" buddy, impoverished community-college student Johnny G. Jenkins (voiced by Jonathan Silverman). Others in the cast included Angus, a doped-up ferret who'd escaped from a corporate testing lab; Johnny's father, Doug, a non-charming drunk; Johnny's oversexed grandma, a character right out of Playboy; and sexy girl-next-door Paula (voiced by Juliette Lewis). Also appearing in animated form were a number of pop-culture icons, some of whom actually provided their own voices. Merriwether Williams of SpongeBob SquarePants fame served as head writer. The initial seven episodes of Free for All were animated by Film Roman (The Simpsons, King of the Hill); the series premiered July 11, 2003, on the Showtime cable network.
2003 TVMA Comedy, Other
Watchlist
Where to Watch

7 Seasons
The carnal escapades of a New York City novelist who relocates to Los Angeles when one of his books is turned into a movie and he's pegged to work on the screenplay. After overcoming writer's block, he takes a job ghostwriting a famous record producer's memoir and later teaches a college course in creative writing.
64   Metascore
2007 TVMA Comedy, Other
Watchlist
Where to Watch

2 Seasons
While the cable TV dramedy Dead Like Me may resemble a bizarro version of Touched by an Angel, series creator Bryan Fuller insisted that his inspiration was Piers Anthony's novel On a Pale Horse, in which a mere mortal is forced by circumstance to replace "Mr. Death." Ellen Muth stars as Georgia "George" Lass, an 18-year-old perennial loser whose inability to stay in school or hold down a job is matched by the disdain in which she is held by her family. Given George's miserable track record, it is hardly surprising that she is killed in a stupid freak accident, crushed to death by a fragment of the Mir space station's toilet. Upon realizing that she is dead, George finds herself in the company of three other decedents: vapid actress Daisy (Laura Harris), self-styled lothario Mason (Callum Blue), and streetwise Roxy (Jasmine Guy). Assembled by the abrasive Rube (Mandy Patinkin), George and her new companions have been assigned to a post-mortem "Reaper" team, dedicated to helping other departed souls make the transition between life and death. The team's job was complicated by the fact that all of the Reapers retained the memories and emotions of their "living" days, and all of them had left behind unresolved issues that would have to be resolved in the afterlife. Dead Like Me debuted June 27, 2003, on Showtime.
2003 TV14 Fantasy, Comedy, Other, Science Fiction
Watchlist
Where to Watch

8 Seasons
Produced for cable's Showtime service, the half-hour Weeds starred Mary-Louise Parker as suburban housewife Nancy Botwin, whose comfy, affluent existence was shattered by the unexpected death of her husband. With no other readily available source of income, Nancy decided to service an ever-growing consumer demand -- by selling marijuana to other white-bread suburbanites. Purchasing her pot from streetwise dealer Conrad Shepard (Romany Malco) and his aunt, supplier Heylia James (Tonye Patano), Nancy set up her new business enterprise using a bakery as a front, with the assistance of city councilman Doug Wilson (Kevin Nealon) -- all the while keeping her activities a secret from her snooty, traditionalist best friend, PTA president Celia Hodes (Elizabeth Perkins). Also in the cast were Alexander Gould and Hunter Parrish as Nancy's sons, Shane and Silas; Justin Kirk as her overgrown-slacker brother-in-law, Andy; Andy Milder as Celia's feeble husband, Dean Hodes; Allie Grant as the Hodes' overweight daughter, Isabelle; and Martin Donovan as Peter, a single dad whom Nancy fell for -- and who turned out to be a DEA agent. The series' ironic theme music was the Womenfolk's "Little Boxes," a satiric paean to split-level conformity. One of those series invariably described as "smart and sexy" by in-the-know critics, the Golden Globe-winning Weeds debuted August 7, 2005.
71   Metascore
2005 TVMA Comedy, Other
Watchlist
Where to Watch