7 Reasons Why Ben H. Is the Perfect Pick for The Bachelor

Besides the fact that Ben is VERY good looking, he stayed out of the drama and we appreciate it

Ben Higgins might've just gotten his heart broken on The Bachelorette, but we were actually celebrating his exit in hopes that he could now become the star of The BachelorSeason 20.

The 26-year-old Colorado native made us all swoon the moment he stepped out of the limo, confident but not cocky, and immediately told Kaitlyn she looked beautiful and complimented Britt on her radiant smile. While he flew under the radar a bit in the first few weeks thanks to outbursts from Clint, Kupah, Tony and Ian, he emerged as a front-runner giving Kaitlyn a sense of calm during the Nick and Shawn s--t storm. Ultimately, Kaitlyn said goodbye to Ben in the penultimate episode, and while the second runner-up is always a strong candidate to star in their own season, it's all but a guarantee that Ben will be our guy.

The Bachelorette's Chris Harrison: Ben never had a chance

Before the official announcement comes, here are our seven biggest reasons why Ben is the perfect choice as the next Bachelor.

1. He's very, very good-looking.
Seriously, the man looks like he stepped out of a J. Crew catalogue.

2. Yet he has no idea.
Not once has it seemed like Ben knows he's a major "babe soda." In fact, Ben is extremely insecure about finding love, having told Kaitlyn he was afraid he was unlovable. While it seems crazy that he thinks that, his explanation actually made sense. "My biggest fear is that you could be not loved back or unlovable," he said in the clip below. "I do think that comes from [my] past relationships. I don't know if there was ever a mutual love. Did she love me back? It's hard to say now. If you put yourself out there and you're rejected that hurts and it affects you."

3. He dresses well.
The man can even pull off a chunky knit sweater!!

5. He knows how to express himself. It's often a rare occurrence on reality television that a contestant speaks eloquently while still giving the perfect soundbite. Ben showed off his narrative prowess when he asked Kaitlyn what happened between her and Shawn. Instead of confronting her or getting heated, he calmly expressed his concern for how it affected his relationship with Kaitlyn. Also, he gets brownie points for knowing exactly when to compliment a woman and still make it always sounds genuine. 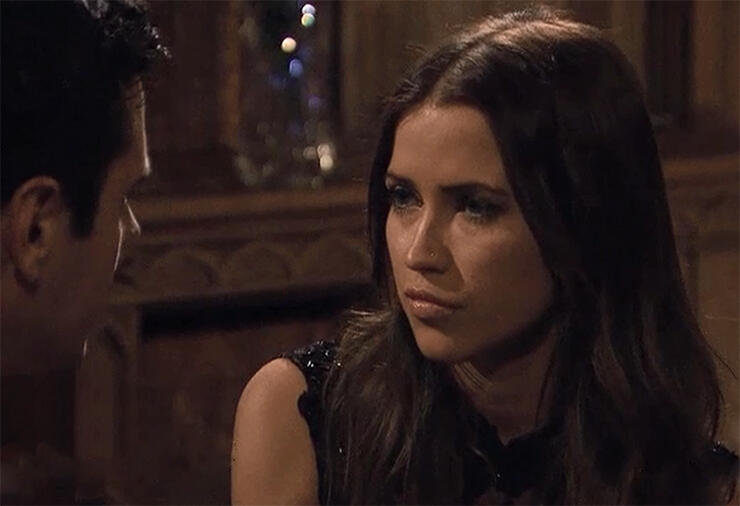 6. He stayed out of the drama.
It would've been easy to get caught up in the Nick-vs.-Shawn debate and share with Kaitlyn his own two cents on the situation, but instead Ben focused all his time with Kaitlyn on her alone. Not only did it show us that Ben is pretty much drama-free, but it also proved that he's not going to stand for catty BS among the women on his season either.

7. He had a classy exit.
A few of the men this season could learn a lesson or two from how he handled Kaitlyn's rejection. For one, he didn't get angry or defensive. Instead he simply told her he'd love to share his life with her and it's sad that won't happen. (Of course he added, "You look great tonight, by the way" on his way out.) Later in the limo, he could've spewed negativity as many do once they say their goodbyes, but nope, not Ben. Watch:

Do you want Ben to be the Bachelor? Tell us why!

The Bachelorette "Men Tell All" airs on Monday at 8/7c on ABC.