After being stranded in the Brazilian jungle, young American backpackers are abducted and find themselves the victims of an organ-harvesting ring. Josh Duhamel ("Las Vegas") stars in this chilling shocker. Melissa George, Olivia Wilde, Desmond Askew. Directed by John Stockwell. 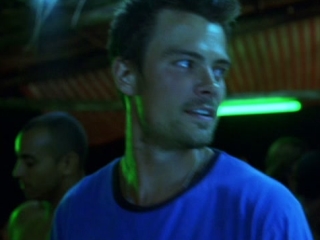 Before the Cineplex got hostile with Hostel, there was the equally chilling Turistas, in which a pack of young, nubile folk take a very bad detour down a very bad road while backpacking through Brazil. Thing is, Turistas is just hitting theaters now, though it's sure to slake any horror buff's thirst for a bloody, tense time. TVGuide.com spoke with Josh Duhamel, who stars in the pic, about his rumble in the bug-infested jungle, the fate of NBC's Las Vegas and, of course, his Fergalicious lady love. TVGuide.com: I'm thinking the Turistas shoot was either sun-kissed and full of soft, warm sand, cold drinks and beautiful people, or bug-infested and dysentery-tainted. Or was it somewhere in between?Josh Duh

1 hr 51 mins
For generations, the Shroud of Turin has existed as a relic of unknown possibility. When a cult steals the Shroud for nefarious purposes, the unlikely duo of the humble Father Marconi and museum curator Laura must race against time to thwart the cult and their sinister schemes.
37   Metascore
2022 R Horror, Suspense
Watchlist
Where to Watch

1 hr 42 mins
On the heels of a heart-wrenching familial loss, a gifted robotics engineer (Allison Williams) makes it her life's work to develop a sophisticated, lifelike artificial intelligence doll (Amie Donald). At first, her invention seems to be the ideal companion for a young girl (Violet McGraw) until the doll begins to develop its own sense of self, with sinister consequences. Gerard Johnstone directs the science fiction horror film. Co-starring Ronny Chieng, Brian Jordan Alvarez, and Arlo Green.
72   Metascore
2023 PG13 Horror, Suspense, Science Fiction
Watchlist
Where to Watch

2 hr 17 mins
In a quiet town in the rural Midwest, a former police officer (Stephen Root) takes it upon himself to continue investigating the disappearance of a young girl despite the case going cold. In his search, he stumbles upon a group of youths that he suspects may be harboring a sinister, supernatural secret. The further he becomes involved with the group, the more connections to his investigation he pieces together. Based on the graphic novel of the same name by Cullen Bunn and Vanesa R. DelRey. Written and directed by David Prior. Joel Courtney and Robert Coutts co-star.
2020 R Drama, Horror, Suspense, Other
Watchlist
Where to Watch

Knock at the Cabin

1 hr 50 mins
Eric and Andrew's idyllic family holiday soon sours into a nightmare when an enigmatic extremist group takes them and their daughter, Wen, hostage, claiming that the choices Eric and Andrew make can either avert or herald the coming apocalypse. Faced with an unthinkable choice, the couple struggles to survive and protect their daughter at all costs.
2023 R Horror, Suspense, Other
Watchlist
Where to Watch

2 hr 28 mins
In a small town in 1989 Maine, seven bullied kids discover that a malevolent force is preying on the local children. When they realize that the town's adults can't protect them, they band together to destroy the monster, a killer clown called Pennywise.
69   Metascore
2017 R Horror, Suspense, Other
Watchlist
Where to Watch