Jude Law defines charisma in this funny, insightful and sometimes poignant portrait of an unabashed philanderer. Law plays Alfie, a Manhattan chauffeur who begins to reevaluate his shallow ideas about women and romance. The comedy-drama is a remake of the 1966 Michael Caine film of the same name. Marisa Tomei, Susan Sarandon, Jane Krakowski, Nia Long, Omar Epps. 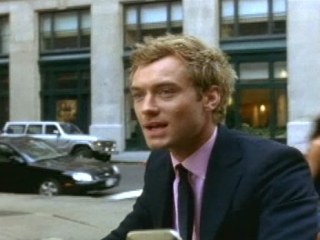 Here's Everything Leaving Hulu in January

Get these movies in your eyeballs ASAP

Jane Krakowski to Star in Dead Boss Pilot for Fox

Jane Krakowski&nbsp;will star in Fox's pilot&nbsp;Dead Boss, TVGuide.com has learned. The comedy-mystery project tells the story of Helen Stephens (Krakowski), an overachiever who's wrongfully convicted of murdering her boss. Helen is then forced to rely on her train-wreck sister to prove her innocence.

Jude Law and Sienna Miller have split for the second time."I can confirm that Jude Law and Sienna Miller are no longer in a relationship," Law's rep said in a statement.Check out photos of Sienna MillerFurther details were not provided, but People reports that the break-up occurred several weeks ago. Law, 38, and Miller, 29, started dating in 2003 after meeting on the set of Alfie and got engaged on Christmas in 2004. They broke up in ...

It's been 12 years since Marisa Tomei charmed moviegoers as the sassy, gum-snapping Mona Lisa Vito in My Cousin Vinny. While she'd played other roles before &#8212; including a memorable stint on As the World Turns &#8212; this comic turn earned her an Oscar and skyrocketed her onto Hollywood's A list. Any chance Tomei, who'll next appear in Alfie (opening Friday), would reunite with Vinny costar Joe Pesci for a sequel? "We both want to do it," the 39-year-old Brooklyn native says, "but it is a matter of getting the script, and it is a whole studio thing. We enjoy each other so much and we have so much fun." However, she doesn't think stepping back into Mona's heels would be a cakewalk. "It would be hard to revisit any character," she muses. "I remember what she feels like and the energy of it, but I don't remember specifics. It is a scary prospect, [but] I think it would be really good." Of course, Tomei's reached

Does any film star in Hollywood work as much as Jude Law? The 32-year-old star of Alfie (opening Nov. 5) has had six movies released within a three-month span. Then again, Law's costar Susan Sarandon &#8212; who plays Alfie's rich lover &#8212; has an equally impressive total of three movies hitting theaters this fall. The other two are Shall We Dance? and the holiday flick Noel (due on Nov. 12). But Sarandon was especially thrilled to lay down the Law. "Jude was fabulous," the 58-year-old actress tells TV Guide Online. "He's like a character actor who has been given this amazing charm and grace. He is so much better than he needs to be when he looks like that. So he's really fun to work with." Cuddling with the Brit heartthrob wasn't her only perk on Alfie's set. Sarandon also enjoyed sporting her sexy high-society duds. "It was the first time in a long time that I have wanted to keep my wardrobe," she smiles. "W