The miniseries makes deft use of still photos, interviews and archival footage to give the past a wonderfully nostalgic air of years truly gone by, and it effectively documented racism's toll on baseball in the first half of the 20th century. 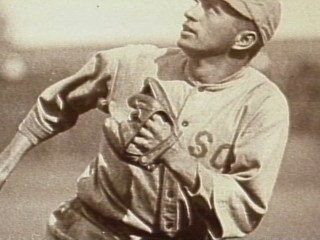 No Ordinary Family8/7c ABC Dysfunctional families will try anything to become close again: Sunday dinners; TV hour; or even therapy. For the Powells, it's a simple matter of harnessing their respective superpowers. Of course, for Jim (Michael Chiklis), Stephanie (Julie Benz) and their two teenage kids, it takes a plane crash in the Amazon for these abilities to kick in, and in tonight's sci-fi drama series premiere, police sketch-artist Jim tests the limits of his immense strength, while his scientist wife measures her amazing speed. &mdash; Joe Friedrich Read on for previews of Inside the Actors Studio, Glee, Baseball: The Tenth Inning, Stargate Universe, Running Wilde and The Good Wife.

Ken Burns Adds to Baseball History with The Tenth Inning

The star of Ken Burns' The Tenth Inning &mdash; besides baseball itself &mdash; is Barry Bonds. "He had to be," Burns says. While Babe Ruth did it on hot dogs and beer and Hank Aaron on a diet no one ever questioned, Bonds is suspected to have set baseball's all-time home-run record on steroids. So Bonds looms large throughout the four hours of Burns' follow-up to his Emmy-winning 1994 documentary series Baseball. Burns and partner Lynn Novick &mdash; whose credits include the masterful The Civil War and Jazz &mdash; expansively cover the last 16 years of the sport, including...

Baseball, A Film By Ken Burns

35 Seasons
This acclaimed, long-running documentary series is a showcase for independent films on a wide variety of subjects, from the heartwarming ('Sweet Old Song,' about a 91-year-old musician) to the whimsical ('The Sweetest Sound,' a study of names) to the controversial ('Live Free or Die,' about an abortion doctor). Whatever the subject, the most important criterion is that the films express a 'point of view.'
1988 TVPG Documentary, Other
Watchlist
Where to Watch

2 Seasons
The animals, landscapes and people who live alongside three iconic rivers are examined in this documentary series.
2019 TVPG Documentary, Other
Watchlist
Where to Watch