A Texas teenager moves to New York City and becomes a nanny for a couple with four children.

Disney Channel's highly rated sitcom Jessie returns for its fourth season on Friday, Jan. 9 at 8:30/7:30c. Jessie stars Debby Ryan as the nanny for a group of kids adopted by movie stars (think Brad Pitt/Angelina Jolie). In the season premiere, "But Africa is So-Fari," the kids think Jessie is going to Africa to find her ex-fianc&eacute;. They make the trip to the continent themselves, but then end up on an adventure. Here's a first look at Season 4 of Jessie.

Surf's up! Disney Channel is ready to give viewers a sneak peek at Teen Beach 2, the follow-up to its hit 2013 entry Teen Beach Movie.

Jessie's titular hero is going to break ground when she becomes the first Disney Channel character to get engaged. Jessie (Debby Ryan), 22, will accept her boyfriend Brooks' (Pierson Fode) proposal at the end of a four-episode arc concluding in the fall. "Jessie is an adult, and we felt we could tackle this in a way that still feels appropriate for our audience," Adam Bonnett, Disney Channel executive vice president of original programing, told&nbsp;The Associated Press.

First Look: Phineas and Ferb Gets "Freaky" with Jamie Pressly 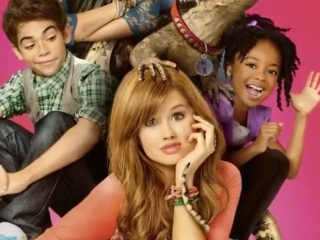