The day-to-day work and familial feuds at an upstate New York motorcycle company. 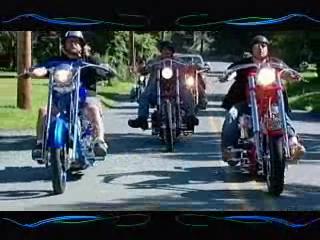 The Best Shows and Movies to Watch This Week: Lenox Hill, Da 5 Bloods

And a long-awaited movie arrives on Disney+

There are no more Dirty Jobs. Discovery Channel has canceled the reality show after eight seasons, creator and host Mike Rowe announced in a blog post Wednesday. One of the network's...

The Discovery Channel has canceled American Chopper after 10 years, Entertainment Weekly reports. "After 10 years and 233 episodes of incredible, riveting reality television, American Chopper will be ending its run," Eileen O'Neill, president of Discovery and TLC Networks, said. "This series was one of the very first family-based reality programs on television ... The Teutuls have given us really innovative bike builds and real drama since 2002. We wish both Orange County Choppers and Paul Junior Designs the best."

Labor Day weekend is known for barbecues, soaking up the last bit of sun and TV marathons of course! So cuddle up to the couch and check out what's on all weekend long. (All times are ET/PT)

TLC To Bring Back American Choppers

The recently canceled American Choppers, which aired its supposed series finale Feb. 11, will be revived for another season on TLC, according to The Hollywood Reporter. American Chopper comes to the end of the road The show premiered in 2003 on the Discovery Channel before moving to TLC in 2008. The series follows

18 Seasons
High risk, real-life adventure on the high seas in this series that documents the events aboard fishing boats in the Bering Sea during the Alaskan king crab, Snow crab and Opilio crab fishing seasons. Watch the struggle and experiences of the fishermen as they encounter deadly dangers and heavy tides during their adventure of finding the deadliest catch!
2005 TV14 Reality, Other
Watchlist
Where to Watch

14 Seasons
Two strangers attempt to survive without food, water or clothes in harsh environments around the world.
62   Metascore
2013 TV14 Reality, Action & Adventure, Other
Watchlist
Where to Watch

12 Seasons
A father and son bring a group of greenhorns to Porcupine Creek, Alaska, to mine for gold in this reality series. Follow this reality series about Jack and his son Todd who gather a group of greenhorns to Porcupine Creek, Alaska. Facing an economic meltdown, the team risks everything and sets out on a mission to mine for gold in the wilds. Todd and his team face the grandeur as well as the hardships of Alaska that included an threatening winter that will halt operations along with their opportunity to strike gold.
58   Metascore
2010 TV14 Documentary, Reality, Drama, Action & Adventure, Other
Watchlist
Where to Watch

6 Seasons
Each match consists of two robots competing in a single, three-minute bout in which the goal is to destroy or disable their opponent. If there is no knockout during the battle, a panel of judges will declare a victor. Some of the returning favorites this season include Tombstone, Minotaur, Chomp, Witch Doctor, Bronco, Bombshell, Bite Force, Yeti and more.
2018 TVPG Reality, Science, Family, Other
Watchlist
Where to Watch

6 Seasons
Two strangers attempt to survive without food, water or clothes in harsh environments around the world.
2015 TV14 Reality, Other
Watchlist
Where to Watch

10 Seasons
Following tow-truck drivers who work along an inhospitable trucking route in British Columbia.
2012 TVPG Documentary, Reality, Other
Watchlist
Where to Watch