"It's 11:59 and 59 seconds..." Chris Hardwick announces at the opening of @midnight.Except it's actually 4:30 in the afternoon on the efficiently tiny Hollywood set of Comedy Central's addictive game show, which airs Monday-Thursday at, well, midnight. For host and executive producer Hardwick, @midnight is the closest embodiment to who he is, aside from his stand-up comedy."@midnight has the most essential qualities of my personality," Hardwick tells TVGuide.com. "I love game shows, I'm a child of the Internet and comedy and also British panel shows..."

"It's 11:59 and 59 seconds..." Chris Hardwick announces at the opening of @midnight.
Except it's actually 4:30 in the afternoon on the efficiently tiny Hollywood set of Comedy Central's addictive game show, which airs Monday-Thursday at, well, midnight. For host and executive producer Hardwick, @midnight is the closest embodiment to who he is, aside from his stand-up comedy.
"@midnight has the most essential qualities of my personality," Hardwick tells TVGuide.com. "I love game shows, I'm a child of the Internet and comedy and also British panel shows. This kind of weird mash-up of a show is my perfect dream show. So it is 100 percent all the things that make me happy."

17 grossest zombies on The Walking Dead so far

The concept is simple: Three comedians try to outwit each other by crafting funny responses or selecting the correct mulitple-choice answer in mini games based upon what's currently trending on the Internet. For example, in Hashtag Wars, acceptable answers for the hashtag #CheeseSongs could be "Let It Brie" or "Havarti in the U.S.A." After one person is eliminated for earning the least points, the audience determines the winner based on the best answer for the final round, FTW (For the Win) .The daily show requires a quick turnaround and a large team scouring the Internet at all times. After a morning meeting determines the episode's structure, upwards of 10-15 writers get to work. Hardwick runs through the cues around 3:15, and the show is shot at 4:30 to air later that night. "I feel like we cut a 30-45-minute show down to 21 minutes, and a lot of times it's like, 'Sh--, what do we cut?'" Hardwick says. "So we started putting extended versions of the shows on Comedy Central's website and app. But the show doesn't really sag. It's got to be the highest joke-per-minute ratio of any show on television. There's no interview segment, there's no sketch segment. Let's make as many jokes as we can in 21 minutes about the stuff that we found that happened today on the Internet." Hardwick perfected the show's formula at his Nerdist Theater in Los Angeles' Meltdown Comics, workshopping the show live until he found its sweet spot. For him, the quality of the comedy is as important as how topical the show is. "I'll still say that stand-up is the thing that I identify with the most, and that was always the thing that motivated every decision that I made after 2007," Hardwick reveals. "But it's hard to do stand-up when people don't show up to your shows. In the early 2000s, comics faced the dilemma of: How do we get our voice out into the world? There aren't really stand-up shows on television anymore."

Hardwick initially started his Nerdist podcast in 2010 to help him and his fellow comedians get exposure. "A lot of it was really engineered to try to make people familiar with who I am so they can decide whether they want to see me perform live," he explains. Today, @midnight has had even greater success with introducing viewers to a slew of comics, including Nikki Glaser, Kurt Braunohler, Natasha Leggero, Paul F. Tompkins, Grace Helbig, Mamrie Hart, Kyle Kinane and this reporter's favorite, Ron Funches. "Ron Funches is basically a never-ending magic hat of incredible comedy and adorableness," Hardwick acknowledges. "It's one of the reasons why I smugly love our show so much is that it basically creates a platform for people like Ron to shine and that people can discover people like Ron. I've heard that it's actually started to help people's ticket sales on the road. As a comic, I know how important that is. It makes me happy."Although Hardwick still performs stand-up, his world has opened up considerably since his humble comedy roots. Besides heading up @midnight and the Nerdist podcast, he also hosts AMC's post-Walking Dead talk show Talking Dead, is the CEO of Nerdist Industries, has written a self-help book The Nerdist Way, and lends his voice to various animated projects, video games and the Nickelodeon series Sanjay and Craig. As the nerd equivalent of the ubiquitous, multihyphenate Ryan Seacrest, Hardwick's ambition to try anything and everything knows no bounds. "You know, I haven't been approached for hand modeling yet, but it's an exciting field that I'm looking to break into," he jokes.It wasn't always this way. Hardwick, who'll turn 43 on Nov. 23, started out in the mid-1990s as a Los Angeles-based DJ and as the host of MTV's Singled Out opposite Jenny McCarthy. Despite the occasional acting and hosting gig -- including the failed UPN comedy Guys Like Us and the cringe-worthy blind-dating show Shipmates -- nothing really hit. "I was kind of a screw-up from 1994 to 2003," he admits. "There wasn't really a plan, there was no vision behind it. It was just sort of survival mode. I think that's why it kind of took so long for my career to really fall into place."What finally clicked was Hardwick's decision to become sober, something he addresses in his self-help book and even on @midnight. Check out Peter Hardwick Facts below, a game designed to celebrate 11 years of Hardwick's sobriety by poking fun of those dark days of aimlessness and the puffy-faced person that the host prefers to think of as "Peter Hardwick":"When you're doing stand-up, you want your stand-up to be more and more personal the better you get at it," Hardwick says. "Why not use this as an opportunity to make the show really personal and also tell other people, 'Hey, if you're in a bad place, it can get better. You just have to take the first step. You can be OK,' but without being really dramatic and heavy about it."After tossing the bottle, for the next four years Hardwick focused on two things: acquiring the life skills he lacked, such as time management, and determining what his true passions in life were. "I made the decision in July of 2007 that I was only going to pursue all the things that were a personal interest to me, which you would categorize as nerd things. In August, this job just magically came along, which was Wired magazine doing a science-focused show for PBS, Wired Science. So I went after it really hard and I got it, and all of these doors started to open, like a tech expert position opened up at G4. I started working that, and that led to a job working for G4 for four years. Wired Science was that job that tipped everything in the right direction. I ended up writing for Wired magazine for like five or six years from that." Fast-forward to 2014, and the @midnight brainchild is growing faster than a one of those spongy dinosaur capsules plunged into boiling water. Currently in its second season, the show has performed special episodes at Comic-Con and in New York, featured its first episode with fictional characters on the panel thanks to Reno 911! and recently taped its 160th episode on Nov. 14.

Watch the crazy Too Many Cooks video everyone is talking about

And the show won't stop at merely responding to what's trending. Already @midnight itself has demonstrated the ability to drive Internet conversation -- such as the supercut of Hardwick declaring, "Points!" or the Hashtag Wars categories trending nightly -- which occasionally leads to a Worm Ourobouros-situation in which the show feeds upon itself."You want to be careful not to be too precious and self-referential," Hardwick acknowledges, "but one thing that we are doing is we've just hired a digital team to start creating content. For Phase II, can we make things online and see how people react to it? Like the Adult Swim Too Many Cooks thing that went up [recently] is a perfect example. You get the benefit of getting to create the content and then getting the aftermath."It's hard work heading up one's own nerd media empire, and Hardwick's packed schedule requires almost everything to be scheduled, even sleep. But as the poster child for fanboys, how he unwinds can potentially become fodder for upcoming comedy bits or projects. He still plays Dungeons & Dragons (much to the dismay of one potential blind date), has become addicted to HGTV ("I redid a house recently and I've been furnishing it, which I've been cataloging on Instagram," he says) and still can't escape the pull of the Internet wormhole. "In the 20 years that I've been online, I couldn't even begin to tell you -- I'm sure there was probably a year lost when Napster first came out," he says. "Who knows? Let's just say it's a considerable portion of my life. But now I get to justify it because it's my job."Comedy Central's @midnight airs Monday-Thursday after The Colbert Report.Can't get enough of his Hardwickiness? Check out his Watchlist below: 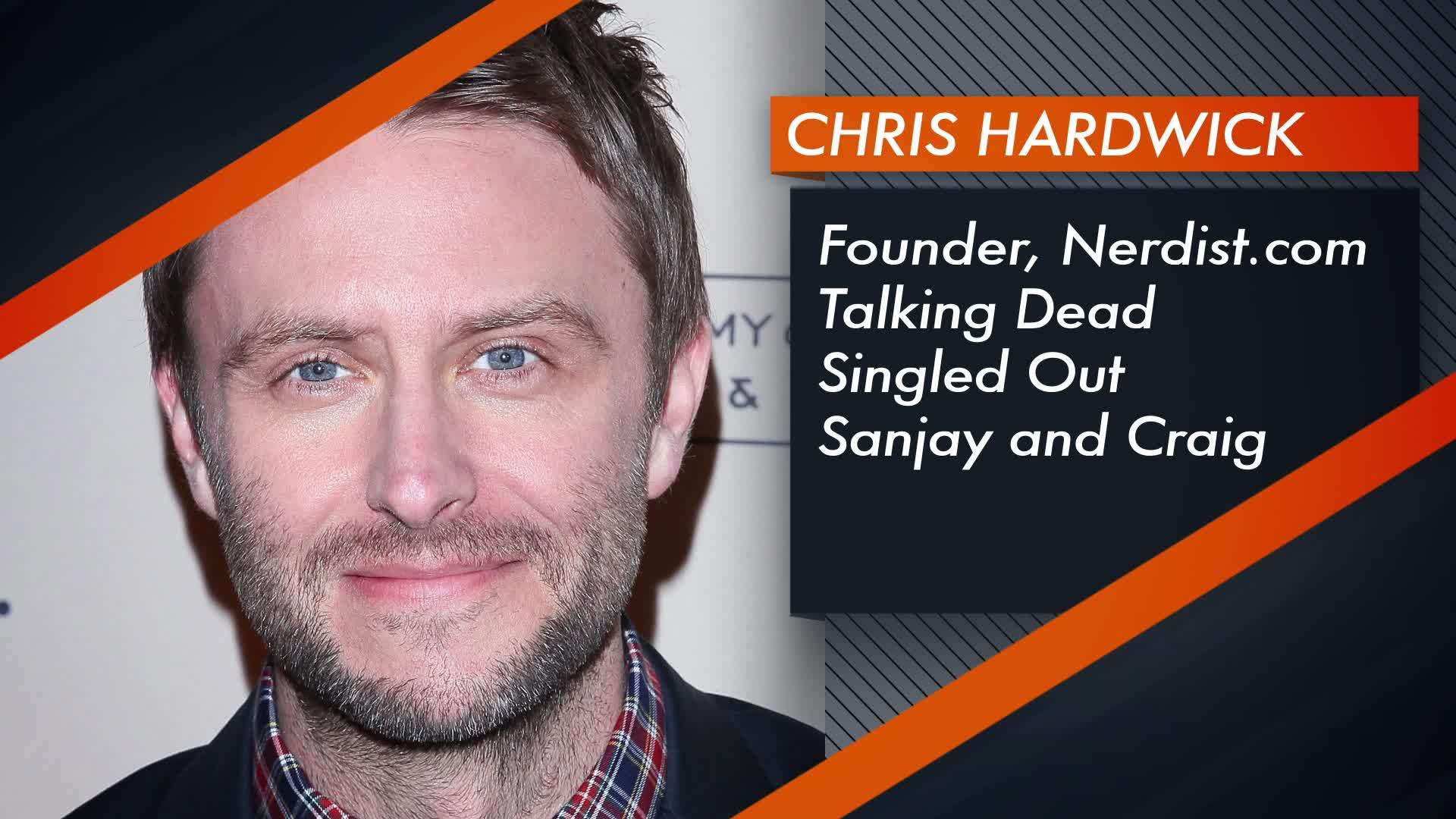