Reese Witherspoon shines as Thackeray's plucky 19th-century heroine Becky Sharp in this lush adaptation of his novel. It's the story of an orphan who overcomes her humble beginnings through determination, intelligence and cunning. James Purefoy, Rhys Ifans, Gabriel Byrne, Romola Garai. 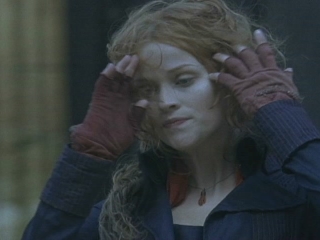 Whether he's keeping 'em honest on his nightly newsmagazine, Anderson Cooper 360 (10 pm/ET on CNN), or tackling personal demons amid the horrors of Iraq and Katrina in his new book, Dispatches from the Edge, Anderson Cooper has a style all his own. TV Guide: I spent the weekend reading your book and let me tell you, it's pretty dark. Working out some issues here, huh?Cooper: [Laughs] Well, yeah... I guess. TV Guide: Of course, between covering wars and natural disasters, this has been a tough year for you.Cooper:

Have you seen Keri Russell in ...

Question: Have you seen Keri Russell in the new issue of Vanity Fair? She looks beautiful! Answer: I have seen it and yes, she looks stunning. Having said that, I'm not sure how I feel about the whole world getting a peek at her bare bum.

Teri Hatcher's confession to Vanity Fair about the sexual abuse she endured as a child has been billed as the "first time" she has broached the topic&nbsp;— unless, that is, you count an interview she gave TV Guide nearly a decade ago. In the magazine's June 15, 1996, issue, Hatcher explained her volunteer work with teenage girls by saying, "In my own way, I understand the pain of abuse. [There is] a specific connection to why I do that." After a pause, she added, "There. I don't think I have ever said that before. That will be new." Until 10 years later, that is.

Well-placed sources tell the New York Post that the "Mystery Man" referred to in Teri Hatcher's Vanity Fair interview — that is, the lover who dispatched her in such a way that the Desperate Housewives star was shaken enough to come forth about her sexual abuse as a child — is none other than George Clooney. A rep for the newly minted&nbsp;Oscar winner tells the Post, "I doubt very seriously that your source is credible." UPDATE!!! Clooney tells Friday's Access Hollywood the speculation "isn't true,"&nbsp;adding that it&nbsp;"takes away from [Hatcher's] brave decision" to help incarcerate her molester.&nbsp;

In a cover-story interview for Vanity Fair, Desperate Housewives star Teri Hatcher reveals that at the age of 5, she was the victim of sexual abuse at the hands of her uncle — and just a few years ago played a major role in having him prosecuted and sentenced to 14 years in prison for molesting someone else. "I'm 41 years old and it's time for me to stop hiding," she tells the magazine. "I don't want to pretend it didn't happen anymore."