An FBI agent transforms into a ruthless fighting machine, intent on exacting revenge on the crime lord who slaughtered his family. The story was first filmed as a Dolph Lundgren vehicle in 1989.

Is The Punisher Planning a Surprise Release?

Law &amp; Order: Criminal IntentAnybody get a Rebecca vibe from this one? Penned by the great Gerry Conway (the same guy who created The Punisher for Marvel Comics), the case involved Dr. Christine Ensel, a plastic surgeon whose parents pushed her into medicine&nbsp;so she would fulfill the promise of her late&nbsp;brother, Frederick, whom she'd never met&nbsp;because he died of leukemia nine months before she was born. The timing was no accident.&nbsp;Frederick was&nbsp;the Ensels' pride and joy, a selfless child who did things like raise money&nbsp;for&nbsp;food&nbsp;to send to&nbsp;starving orphans abroad.&nbsp;His de facto ascension to sainthood&nbsp;made him a royal pain in the&nbsp;bum&nbsp;to luckless&nbsp;Christine,&nbsp;who was forever in competition with her bro's&

We thought Hollywood had room for only one movie star named Tom. Mr. Cruise, that is. But The Punisher's Tom Jane (the artist formerly known as Thomas) has other ideas. Ads for his new indie film Stander &#8212; which opens Friday in limited release &#8212; feature his new stage moniker. Apparently, Jane thought Thomas sounded too old-fashioned for an up-and-coming matinee idol. "I'm just trying to get my wife [Patricia Arquette] to call me Tom," the 35-year-old laughs. "I thought if I put it on billboards maybe she'd get the hint!"In Stander, Jane plays Andre Stander, the legendary South African detective turned bank robber. Playing this part required him to become a master of disguise, changing his wardrobe several times a day for the robbery scenes. Jane thrived on playing the real-life antihero. "My allegiance was to Andre Stander the man," he enthuses. "Not the fans, not the family, not the country, not wha

As the Punisher, Marvel Comics' iconic gun-toting vigilante, Thomas Jane squares off against an army of gangsters led by &amp;uuml;ber-baddie John Travolta. But his bloodiest battle is actually happening offscreen, and it can't be won with bullets or hand grenades. That's the showdown between The Punisher and Quentin Tarantino's highly anticipated Kill Bill, Vol. 2 &#8212; which both hit theaters today, competing for the same action-hungry audience. "I'm sure they'll hurt each other at the box office," Jane sighs resignedly. "It's inevitable. But The Punisher will find its audience. It's a niche movie; it doesn't have to make $150 million to be successful. Besides, as a kid, I loved going to the theater and seeing two films I really wanted to see up on the marquee. It's going to be a fantastic weekend for people who love these kinds of movies." Unlike other actors-turned-superheroes, Jane genuinely can count himself as a lifelong 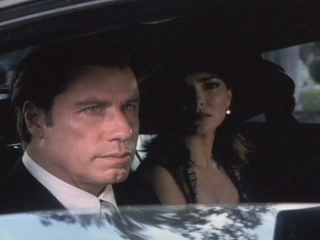