Three brothers who haven't spoken since their father's funeral one year earlier reunite for a journey of spiritual discovery across India. Owen Wilson, Adrien Brody and Jason Schwartzman star in this colorful seriocomedy from director Wes Anderson.

The Game Plan, a Disney comedy starring Kyra Sedgwick (that's my spin and I'm sticking to it) topped the weekend box office with a $22.7 million opening. The weekend's other major new release, Jamie, Jen and Jason's The Kingdom, placed second with $17.7 mil.Rounding out the top five were Resident Evil: Extinction ($8 million), Good Luck Chuck ($6.3 mil) and 3:10 to Yuma (clocking in with another $4.2 mil).In very limited release, both The Darjeeling Limited (aka the Owen Wilson-in-a-head-bandage film) and Ang Lee's Lust, Caution opened strongly.

Barely a week after he attempted to take his life, Owen Wilson is giving friends hope for a turnaround. "Obviously, he has been through a lot," director Wes Anderson told reporters at a Monday press conference to promote The Darjeeling Limited, in which Wilson costars. "I can tell you that he has been doing very well, he has been making us laugh." Anderson reiterated Wilson's request for space during this delicate juncture, saying, "When he is ready he's going to speak for himself much better than any of us could" &#151; and in that charming, "Golly-gee, shucks" voice of his. 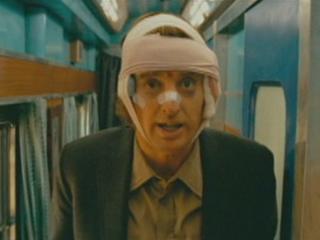