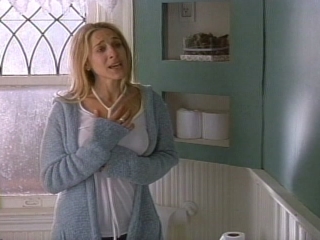 To play the role of a morally and ethically challenged Hollywood producer in David Mamet's showbiz satire State and Main, character actor David Paymer had a specific exec in mind. But when asked the identity of said industry big shot, Paymer regrettably takes the high road. "If I answer this totally honestly, then I no longer work for a certain person," hedges the Oscar- nominated star of Mr. Saturday Night. "But the truth is, it's more of an amalgam of people I have run into &#8212; and not just producers." Still, Paymer concedes that he has yet to encounter anyone as flat-out demonic as his State and Main alter ego Marty Rossen &#8212; whose crimes include helping cover up an affair between his film's star (Alec Baldwin) and an underage local (Julia Stiles) and berating his leading lady (Sarah Jessica Parker) for not baring her breasts on camera. "I never really have worked for someone as brutal as Marty is to

1 hr 37 mins
A down-to-earth student joins a snobby clique in an effort to spy on the popular kids, then begins to act like them. Refreshing, unclichéd comedy.
66   Metascore
2004 PG13 Comedy, Other
Watchlist
Where to Watch

2 hr 6 mins
One night, Chickie Donohue (Zac Efron) was having a drink with some friends in a New York bar. The group was mourning their lost loved ones and the soldiers who were fighting in the Vietnam War. When he started to notice anti-war protestors turning on their friends and family who were in Vietnam, Chick came up with an impossible plan to smuggle into Vietnam, find his friends, and share a beer with them. Peter Farrelly directs this true story based on the book written by John "Chick" Donohue and J.T. Molloy.
39   Metascore
2022 R Drama, Comedy, Action & Adventure, Other
Watchlist
Where to Watch

1 hr 55 mins
Written and directed by Kevin Smith, this third film completes the Clerks trilogy of movies that appeared in 1994 and 2006. Life at the Quick Stop store seems quiet and uneventful until store clerk Randal Graves (Jeff Anderson) suffers a heart attack and survives. With this shot at a new life, Randal approaches fellow store clerk Dante Hicks (Brian O'Halloran) and tells him of his latest plan to shoot a movie about their lives as store clerks. Co-starring Jason Mewes, Ben Affleck, Sarah Michelle Gellar, Justin Long, and Rosario Dawson.
50   Metascore
2022 R Comedy
Watchlist
Where to Watch