The marijuana-induced shenanigans of high-school friends on the last day of class in 1976.

The Best '90s Movies You Can Watch on Netflix, Hulu, Amazon Prime, and HBO Max

From You've Got Mail to The Mighty Ducks

He hasn't changed one bit

Dazed and Confused actor Jason London was arrested in Arizona under suspicion of assault and disorderly conduct, the Associated Press reports. According to Scottsdale police, London supposedly sneezed on a man who then asked him to apologize. When London refused, the man hit him in the face. Check out child stars gone bad!

Since his breakthrough role as a nebbish teen in Dazed and Confused, Adam Goldberg has worked steadily in both television and movies, including memorable turns in Saving Private Ryan and A Beautiful Mind. Goldberg can currently be seen in theaters opposite Julie Delpy (Before Sunrise, Broken Flowers) in the relationship comedy 2 Days in Paris. Meanwhile, he's been hilariously slimy on the small screen as Entourage's wannabe movie producer Nick Rubenstein. The Los Angeles native gave TVGuide.com a bit of background on his Parisian production, as well as some insight on playing a Hollywood low-life. TVGuide.

Rory Cochrane may have shot himself in the foot before thieves put a bullet in his character's chest. Although CSI: Miami producers obliged his request to leave the show, there was a catch: He cannot do "any kind of television work &#8212; cable or otherwise" until 2008, he says, because he signed a six-year contract with the show. The 31-year-old actor &#8212; who says he "couldn't really handle the grind anymore" &#8212; wasn't pleased with the way his character, Tim Speedle, was killed off in last month's season premiere. (He was fatally wounded when his gun malfunctioned during a shootout.) "It was lame," Cochrane says. "He got shot last year because of the same [gun malfunction]. It doesn't make sense. I mean, Speedle knows all these forensics things, and then he doesn't clean his gun?" So has he committed career suicide? "Well, I never did TV before and I survived," says Cochrane, whose films include Dazed and 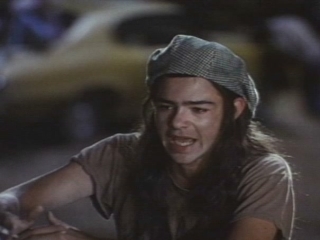