Video: Which NFL Stadium Has the Best Grub?

What's the best NFL stadium to eat at? Hands down Lambeau Field, if you ask the hosts of CBS'&nbsp;Thursday&nbsp;Night Football. "I've got four games at Green Bay this year [and] I'm already training,"&nbsp;Jim Nantz&nbsp;tells us in our video.&nbsp;"Brats, sauerkraut, [we have] all the fixin's up there in the back of our both. I like to eat while I broadcast. It's a little known secret I mute my mic and I let Phil Simms just go."

The NFL may be in a lockout, but some of the league's biggest stars joined Taylor Lautner to spoof the situation for Funny or Die. In a mock movie trailer for Field of Dreams 2: Lockout, Lautner plays an Iowa corn farmer who, just like Kevin Costner in the original film, hears a voice say, "If you build it, they will come." After creating a football field in the middle of the farm, real NFL players including Tony Gonzalez, Ray Lewis, Shawne Merriman, DeSean Jackson and Dwight Dweeney show up for the big game.

We're finally allowed to announce the judges on Oprah's Big Give, ABC's philanthropic reality road show premiering March 2 at 9 pm/ET. "Naked Chef" Jamie Oliver, NFL player Tony Gonzalez and Chris Rock's wife, Malaak Compton-Rock &#151; all of whom are known for their charity work &#151; will choose the weekly winners among 10 contestants crossing the country "making dreams come true" by giving away hundreds of thousands of dollars to "unsuspecting strangers." Says producer Ellen Rakieten, "We wanted to pick people who have obvious credentials for their judging." Not that Oprah herself won't show up; we hear that she's in five or six of the episodes, usually presenting some kind of twist or surprise in the game. Alas, there is bad news for those of you hoping to be a recipient of the Big Give's largesse: Season 1 is already in the can. &#151; Ileane Rudolph 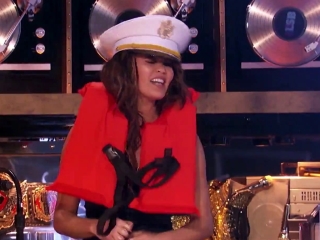