The third time around the world was not the charm for Flight Time and Big Easy. The Harlem Globetrotters got the boot on Sunday's Amazing Race All-Stars after having navigation trouble and switching Detours twice &mdash; but you can sort of blame one stubborn donkey for that. "It wouldn't move!" Big Easy tells TVGuide.com. "What can you do? At that point, we had to switch." They didn't have much luck at the donkey-building Detour though, unaware that they had to put a cart on top of it to get the green light, before they went back to the donkey-riding. How much time did they lose? Find out below. Plus: Get their thoughts on last week's wild finish.

Amazing Race's John and Jessica: We Should Not Have Asked for the Answer

John and Jessica had an unhappy Roman holiday on Sunday's Amazing Race All-Stars. After leaving the Detour first, the couple had taxi trouble and arrived last to the Roadblock at Rome's Spanish Steps. Fortunately, the Globetrotters and the Afghanimals were still there, and Jamal shared the answer with John and Flight Time, thinking there was still another team behind them. Unfortunately, there wasn't, and because John had to get a new postcard to write down the answer, the Season 22 alums were eliminated. "Yeah, I shouldn't have asked them [to tell us the answer]," Jessica tells TVGuide.com with a laugh. "I was a little surprised they did, but at the time none of us thought we were fighting for last."So why did they think Caroline and Jen were behind them? And is this elimination harder to swallow after their infamous Express Pass miscue? See what they say below.

Amazing Race's Mark and Mallory: Our Communication Was Bad

The new &mdash; but not necessarily improved &mdash; Team Kentucky didn't last long on&nbsp;The Amazing Race All-Stars. After Mallory replaced Bopper to race with Mark, the hybrid duo became the second team eliminated on Sunday after they forgot Mark's backpack at the Roadblock and debated whether or not to go back and get it. "I think we were at a disadvantage from the beginning with communication," Mallory tells TVGuide.com. "We didn't know each other well and we didn't talk about anything about the&nbsp;Race&nbsp;since I came in so late." See what else the two had to say about their last-minute pairing, how the Detour also set the back and if they'd ever race together again.

Will the third time be the charm for the cowboys?Fan favorites Jet and Cord will be one of three teams racing for the third time on The Amazing Race All-Stars, CBS announced Monday. The other three-timers are Harlem Globetrotters Flight Time and Big Easy, and mother and son Margie and Luke, the show's first and thus far only deaf Racer.Photos: Meet The Amazing Race All-Stars castOther returning teams include ...

The Amazing Race kicked off Season 20 with what Phil Keoghan called the "most bizarre Pit Stop." On Sunday (8/7c, CBS), the season will close with the series' "biggest shocker ever." For the first time, the team who arrives first at the finish line will be turned around for not completing a task correctly. "We were shocked as the viewers are gonna be," Keoghan tells TVGuide.com. "We were like, 'What just happened?' ... I couldn't believe it happened. Never have we had to tell the team that comes in first that they didn't win the $1 million. But it's good to know we can still have firsts 20 seasons in!" Of course, that team still has a chance to win if they can rectify their mistake at the Roadblock before the next team arrives.So which team &mdash; married couple Dave and Rachel, Big Brother's Brendon and Rachel, border patrol agents Art and JJ, or dating divorcees Vanessa and Ralph &mdash; makes the potentially fatal error? 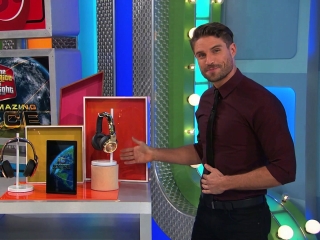 The Price Is Right Primetime Special: The Amazing Race Edition