The Vampire Diaries' Joseph Morgan: Klaus and Tyler Will Develop a Bond

The Vampire Diaries' Joseph Morgan hopes his character Klaus never softens up.
"Turning good and hanging out at the Mystic Grill with the Mystic Falls crowd ... that's not a direction I'm interested in taking," Morgan tells TVGuide.com.

Although Morgan doesn't want Klaus to lose his dark side, he says viewers may see a bit of humanity — and terror — from one of Mystic Falls' original vampires on Thursday's midseason finale (8/7c, CW). "Mikael is the only person that seems to have caused Klaus any kind of fear. In Episode 8, we learned a lot about the family dynamic and the dysfunction that was always there in that family and the way Klaus felt left out and unloved," Morgan says. "We're really going to see some sort of resolve in terms of their relationship." 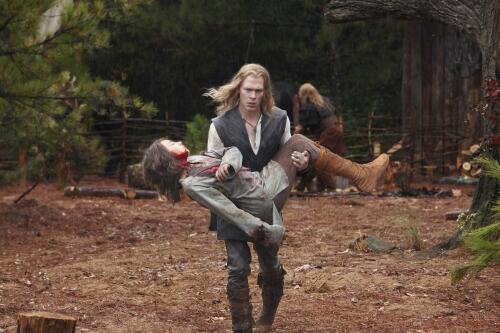 1:16
Watch Now
Watercooler: Is The Vampire Diaries' Rebekah doomed?After a brief absence, Klaus is returning to Mystic Falls and it comes right in time for Homecoming. (And let's just say the man has quite the history with dances and the MFHS gymnasium.) Busy fearing Mikael, Morgan hints that Klaus will be caught off-guard by someone else looking for him: Damon. "It's the first time we have a confrontation that Klaus hasn't been utterly prepared for," he says.But perhaps Klaus will have someone new by his side — newbie hybrid Tyler. "There's a definitely a teacher-student relationship developing there," Morgan says. "It's bizarre but, Tyler doesn't seem to be worried. Actually, he's quite relieved. I've taken the curse away, his transition is no longer painful, he's not changing at the full moon and he has more to relate to Caroline about. There's definitely a bond developing there and you'll see some more Tyler and Klaus scenes."

The Vampire Diaries Bite: Ready for a 1,000-year flashback?

Morgan has had quite the year to say the least. Besides his breakout role on The CW series, he's acting alongside Henry Cavill, Freida Pint, John Hurt and Stephen Dorff in the film Immortals, out Friday. "This is the most exciting time in my life so far," he says.Follow @RobynRossTVG for more scoop on The Vampire Diaries.