Our top moments of the week: 13. Slowest Learning Curve: Before hearing the results of the Australia Gold sunscreen challenge, Celebrity Apprentice's Team Backbone project manager Mark McGrath says he will take all responsibility if his team loses. It did and he does &mdash; until he decides to backpedal and switch the focus to Gary Busey and his crazy antics. But it's too little too late. Silly Mark, don't you know...

Our top moments of the week:
13. Slowest Learning Curve: Before hearing the results of the Australia Gold sunscreen challenge, Celebrity Apprentice's Team Backbone project manager Mark McGrath says he will take all responsibility if his team loses. It did and he does — until he decides to backpedal and switch the focus to Gary Busey and his crazy antics. But it's too little too late. Silly Mark, don't you know Trump always fires the person who takes the blame?
12. If the Shoe Fits Award: For the second straight week on Dancing with the Stars, Kirstie Alley suffers an unexpected mishap when her shoe comes off mid-waltz. She manages to get it back on to finish the routine, but is visibly and understandably embarrassed by her misfortune. Look on the bright side, Kirstie: At least this didn't happen.
11. Best F-Bomb: On Modern Family, Cameron's tyrannical theatrics as Franklin Middle School's interim musical director ("[The kids will] never forget how I Sondheim-ized them!") foreshadow the spectacular failure of his production. (Sound familiar?) When Luke, who's dangling from a harness, is unable to display the letter L for the harmonious finale message "We Love the World," Cam orders Franklin's "majestic insignia" of a gigantic purple F lowered. The new message? "We Love the F Word."
10. Best "That's What She Said": During Tribal Council on Survivor: Redemption Island, Phillip Sheppard's opponents say he is on the bottom of his alliance. "I enjoy being on the bottom, if that's where I am," he says. "It's a nice place to be. You can look up and see what's going on." Then Michael Scott's head exploded.
9. Classiest Tribute: Castle honors the late prolific TV writer and frequent guest star Stephen J. Cannell with an honorary empty seat — that must remain so for a year — at Castle's mystery writers' poker game. It's a touching tribute and a painful reminder of just how much Cannell is missed.
8. Make a (Domain) Name for Yourself Award: Toni Braxton may be the best-known of her sisters, but after the series premiere of Braxton Family Values, it's clear that youngest sis Tamar will be a household name, or rather domain name. Tired of singing back-up for Toni, Tamar openly bemoans the lack of attention on her and her nonexistent solo career in the only attention-grabbing way she can: affixing domain names to the end of sentences. "I need to be in the front, dropping it like it's hot. I'm so over this dot-org, I can't take it," she says. Why don't you speak in proper English-dot-gov?
7. Most Awkward Booty Call: It's all fun and games when Adam and Kristina get butt-dialed by someone pretty clearly in the middle of the horizontal mambo on Parenthood -- that is, until they check the caller ID and realize the call is from their daughter, Haddie. "Maybe she's playing a joke? Maybe she's hurt," the parents hopelessly guess. Maybe she needs to learn how to lock her phone, pronto.

6. Best Curveball: Sure, it was weird when April and Andy invited all their Parks and Recreation pals to a dinner party. (What's so weird? They love to eat dinner and they love to party!) But who could have foreseen their surprise wedding? To the uncharacteristically sincere strains of Simon and Garfunkel's "April Come She Will," Andrew Maxwell Dwyer and April Roberta Ludgate exchange sweet, hilariously apropos vows. "I guess I kind of hate most things, but I never really seem to hate you, so I want to spend the rest of my life with you, is that cool?" April promises. "I vow to protect you from danger — I don't care if I have to fight an Ultimate Fighter or a bear," he replies. Plus: There's a new worst dancer on TV: Rob Lowe's Chris! (Sorry, Elaine Benes!)

5. Funniest Mic-jack: For eight years (and counting), The Daily Show with Jon Stewart has won Best Variety Series at the Emmy Awards, forcing Stephen Colbert and his Colbert Report cohorts to put on their best gracious loser faces. So when Stewart & Co. snagged the Best Late Night Comedy Series prize at the inaugural Comedy Awards, Colbert hijacks the mic to wax nostalgic about his time on The Daily Show and his Emmy losing streak. "I always hug and kiss you [at the Emmys] and I mean it," he tells Stewart. "But tonight, you can go f--- yourself."
4. Worst House Call: Law & Order: Los Angeles fans who followed the cast shake-up already knew that Skeet Ulrich had been shown the door, but his on-screen death is no less harrowing. After investigating a local gang, Ulrich's Rex Winters and his family get an unexpected visit from a gang member, and Winters is shot and killed in front of his wife and young daughter. At least he got a better send-off than ADA Serena Southerlyn.
3. Most Bewitching Death: With everyone talking about an impending bloodbath on The Vampire Diaries, we were sad, but not shocked, when Bonnie appeared to die during her showdown with Klaus. But it turns out it's only a spell, Romeo and Juliet-style, to trick him into thinking she's dead, and Bonnie wakes up, with a pulse and all. Unfortunately for Damon, Elena slaps him hard before she gets that memo.
2. Best Pick-Up Line: When Michael Scott's replacement, Deangelo Vickers (guest star Will Ferrell), tells Erin to change her phone greeting on The Office, Michael oh-so-gently suggests they keep the old greeting. Testing his new authority, Deangelo, again gently, insists they change it again. When the phone actually rings, a panicky Erin picks up the phone and hurriedly apologizes before hanging up. Oh Deangelo, you had us at "Dunder Mifflin, this is."

1. Worst "Good" News: On The Good Wife, investigator Wiley stops by Florrick campaign headquarters shortly after Peter wins the state's attorney post to give Alicia the "good" news: The infidelity claim turned out to be "bogus"; Peter never slept with a co-worker. "Unless you've heard of her," Wiley asks. "Have you heard of her? Leila?" Realizing Leila is colleague and BFF Kalinda, a heartbroken Alicia staggers out of the room with tears in her eyes just as the crowd starts singing "For He's a Jolly Good Fellow."
What were your top moments? 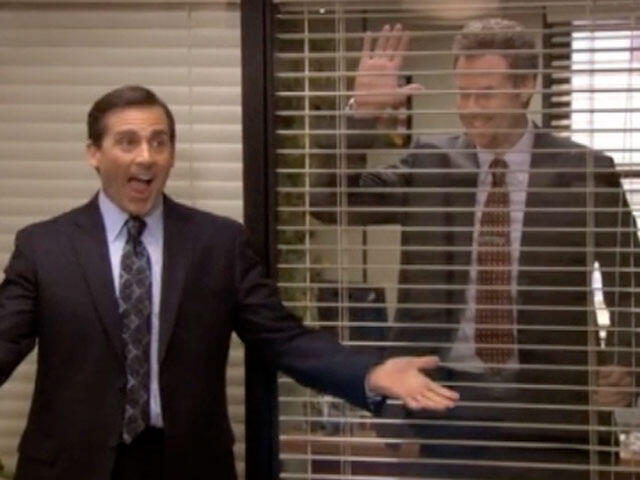