Sons of Anarchy's Final Ride: Jax No Longer Cares About Being the Good Guy

On a sunny mid-July day on the&nbsp;Sons of Anarchy's North Hollywood set, there's a lot of people talking about the end. And, surprisingly for a show this bloody, they're not talking about death.That's because, come November, the cameras will stop rolling for good and the bikers of FX's highest-rated drama of all time will ride off &mdash; sunset TBD &mdash; for the final time. Many have put thinking about the end of the series out of their minds. "I think everyone is in a healthy state of denial,"&nbsp;Katey Sagal&nbsp;says with a laughSons of Anarchy's final season: Jax has a "huge amount of vengeance in his heart"Well, not&nbsp;everyone. "I've been having some pangs of sadness and also kind of panic," star Charlie Hunnam says...

On a sunny mid-July day on the Sons of Anarchy's North Hollywood set, there's a lot of people talking about the end. And, surprisingly for a show this bloody, they're not talking about death.
That's because, come November, the cameras will stop rolling for good and the bikers of FX's highest-rated drama of all time will ride off — sunset TBD — for the final time. Many have put thinking about the end of the series out of their minds. "I think everyone is in a healthy state of denial," Katey Sagal says with a laugh.

Sons of Anarchy's final season: Jax has a "huge amount of vengeance in his heart"

Well, not everyone. "I've been having some pangs of sadness and also kind of panic," star Charlie Hunnam says, acknowledging it's often easier to just think about from his character's point of view. "[As the character] part of it is not recognizing that this is Season 7 and the show is going to end, so his fictional life is needs to be wrapped up in one way or another. I just never think about that stuff."To be fair, Hunnam's character, Jax Teller, has plenty of other things to think about. When Season 7 begins, Jax is behind bars on a parole violation that stems from him being found at his house cradling the brutally murdered body of his wife Tara (Maggie Siff). "I don't think Jax has really truly processed it yet," Hunnam says. "It feels to me that he really has kind of repressed all of that and is instead much more concentrated on vengeance and writing the wrong and not really processing the emotional repercussion of it."Indeed, once he's freed, Jax almost immediately sets in motion a plan to avenge Tara's death. And, as you may have notice from the promotional materials that morph Jax's face into that of the Grim Reaper, he aims to be even more brutal than her killer was. "If he's going to survive, he's got to be every bit as bad or worse than all of the people around him," Hunnam says. "Jax was always so tortured by the pull of who he thought he should be. There's something really liberating about being rid of the sense of having to be a good guy. This season is about Jax deciding... if he's got no reason to leave [the outlaw world], he may as well be what this world demands you be."

Fall Preview: Get scoop on your favorite returningshows

Unfortunately for Jax, he doesn't know that the person he should be unleashing his fury on is his mother Gemma (Sagal), who murdered Tara because she mistakenly believed Tara planned to rat out Jax and the club. "Her motives were not impure," Sagal says. "Club comes first. She really thought she was doing the right thing." So, for now, Jax and Gemma remain cozy. "Right now, [Gemma's] just the rock that he can fall on and she is a huge ally in him taking care of his family," Hunnam says. "I think there's been so much betrayal at this point, he's narrowed his circle down tremendously. It's only about the club. If you're not in his immediate family or the club, you better watch out."That applies double for former SAMCRO member Juice (Theo Rossi), who was not only kicked out of the club by Jax last season, but also is the only person who knows that Gemma murdered Tara. (Juice shot Sheriff Roosevelt and hid the physical evidence to protect Gemma.) Although that puts a huge target on Juice's back, Rossi believes it also gives his character tremendous power. "Gemma and Juice are now completely linked with the biggest secret that's ever been held on this show," Rossi says. "What she's done and what she's hiding, there's only one other person who knows. At that moment, Juice becomes one of the most dangerous people on the show. You don't know what he's going to do and look at what he knows."

Walton Goggins returning to Sons of Anarchy for final season

Perhaps the biggest question of the season then becomes: How long do Juice and Gemma trust each other? "Because of the weight of the lie and the circumstances surrounding Juice, obviously the stakes are really high for both of them and I think that will impact the relationship," creator Kurt Sutter tells TVGuide.com. "Will there come a point where Gemma no longer trusts Juice, he's too much of a rogue? Will there come a point where Juice feels like he can no longer trust Gemma, because she has information on him? We get to play out some of that tension."Possibly complicating matters further is Unser (Dayton Callile), who takes it upon himself to dig a little deeper into the circumstances surrounding Tara's murder. "He really does feel like a commitment to Tara and the desire that she had to save those boys," Sutter says. "I think he feels like he has an opportunity and a responsibility to follow through. And he does have a skill set — he was a good cop."While the Jax-Gemma-Juice-Unser quadrangle plays itself out this season, there's still plenty of club business — namely an all-out gang war Jax fuels to serve his own vengeful ends. Then there's the new sheriff in town (guest star Annabeth Gish), Jax's increasingly uneasy relationship with Nero (Jimmy Smits) and the fact that Jax's ex Wendy (newly promoted series regular Drea de Matteo) is raising Jax's kids. Plus: Everyone's favorite transgender prostitute Venus Van Dam (Walton Goggins) will make a final appearance.

If that all sounds like a lot of things to tie up in a final season, that's intentional. It seems that, just like his cast, Sutter is also trying not to get distracted by thinking about the end. "My whole approach to this season was that I wasn't going into it writing it as the final season or with a sense of writing to that final episode," Sutter says. "I think that's a trap sometimes for shows and I think it leads to inorganic storytelling where you're trying too desperately to tie sh-- up. I'm lucky I don't have to worry about explaining the f---ing smoke monster. I just wanted it to be another season and tell the type of stories that we tell. And that by the end of that last episode that perhaps we've told enough story that people have a sense of feeling fulfilled."I'm pretty clear that there's no way I can satisfy everybody's desire to how this series is to end, nor should I," Sutter continues. "But at the very least I do want the storytelling to be organic, and I think in the process of that, it will be a satisfying ending for people. As things unfold this season and as truths are revealed or not revealed, it'll take our hero to a place where we will, at the very least, understand the decision that he's made."Sons of Anarchy's final ride begins Tuesday at 10/9c on FX. Get more of Hunnam's thoughts on the last season below: 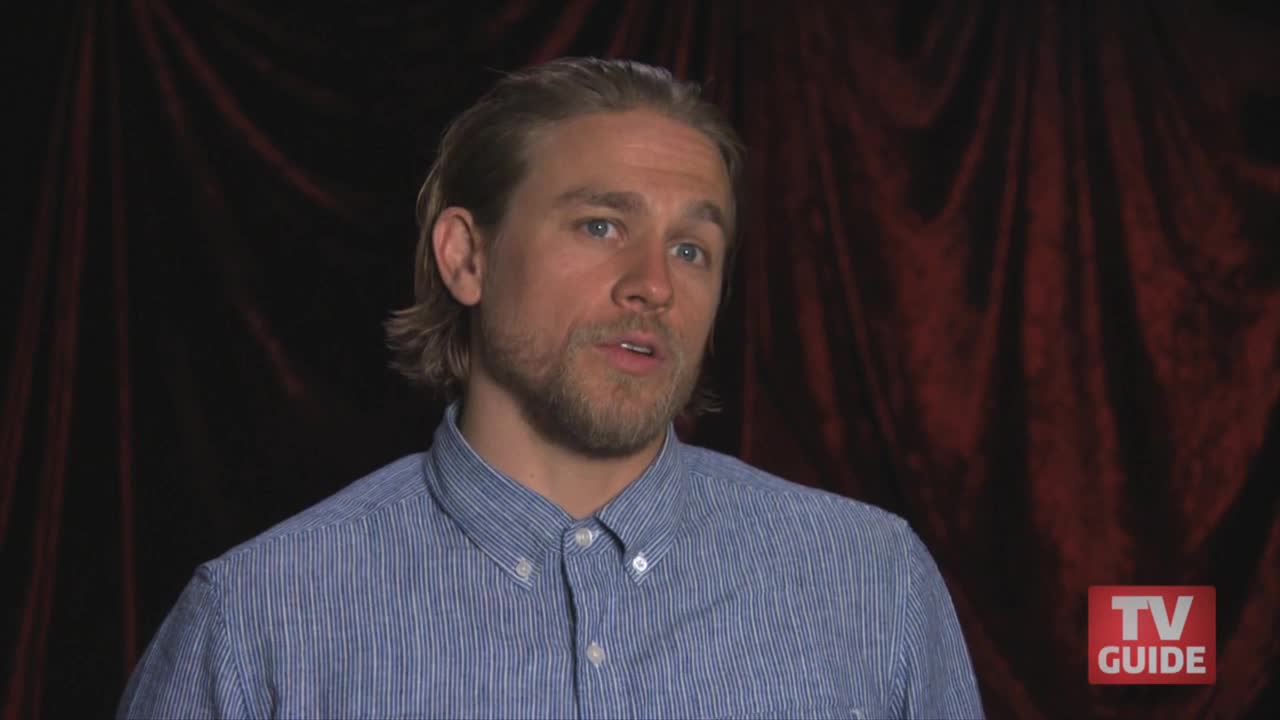