This week, television taught us that all good things must come to an end. Californication's Hank Moody made a difficult choice. The brothers of Nip/Tuck performed an ethically questionable surgery for personal gain. So You Think You Can Dance finally acknowledged the high art that is krumping. And Dexter, a show about a serial killer, made death surprising again. Welcome to Coolest Moments: Finale Fever Edition.

This week, television taught us that all good things must come to an end. Californication's Hank Moody made a difficult choice. The brothers of Nip/Tuck performed an ethically questionable surgery for personal gain. So You Think You Can Dance finally acknowledged the high art that is krumping. And Dexter, a show about a serial killer, made death surprising again. Welcome to Coolest Moments: Finale Fever Edition.

9. Worst Production Values: Dear Oprah Winfrey's Producers: In the future, when you are interviewing the president of the United States at the White House, even if it's for a Christmas special, please remember to change the filters and camera set-ups from "Tearful Movie Star/Victim of Tragedy Tell-All" to "Important Political Figure." A wartime nation dealing with a shaky economy does not want to see its leader in loving, dewy-eyed, soft-focused close-up. Save those flourishes for Travolta's next visit. Thanks! Love, Us

8. Best Confession: In the closing moments of Californication's third season, Hank Moody gets into a fistfight with Mia's agent. Backed into a corner by the extortionist suit, Hank admits to Karen that he slept with Mia when she was 16, just before the police show up to arrest Hank for assault. Talk about violating the penal code!

7. Best Solution to a Situation: Conan O'Brien, not satisfied with the moniker the Jersey Shore nickname generator gave him, asks Mike "The Situation" Sorrentino for a replacement. The washboarded stud dubs the Tonight Show host "The Solution." "I love it!" O'Brien gushes. "Ladies, if you have a problem, I am The Solution!" Next up: transforming him into a "guido."

6. Grossest Surgery: Christian and Sean face an ethical dilemma on Nip/Tuck when a district attorney offers them a deal: If they perform liposuction on a death-row inmate who is too heavy for lethal injection, their son Matt will be released from prison. They agree, and the subsequent surgery scene is beyond graphic — even by FX standards. The surgeons remove layers of bloody flesh like they're folding bed sheets. After watching, you won't need lipo; you'll never eat again.

5. Nicest Surprise:The Sing-Off sounds too corny to be good. But a group performance of Queen's "Under Pressure" in the premiere episode demonstrates the show's cool factor. It's like watching really good karaoke, but sober and with better wardrobe.

4. Best Supporting Actor: Justin Timberlake proves he's at home in any televised situation when he brings the funny to... the Golden Globe nominations? JT enlivens the typically somber seconds with some impromptu drum-rolling and horsing around with co-presenter John Krasinski. After reading that Krasinki's fiancée, Emily Blunt, was nominated for an award, Timberlake quipped, "Ho-ho-ho, somebody's going to have a good night tonight!" How do we nominate him?

3. Most Insensitive: Beau Bridges drops by The Closeras Detective George Andrews, Provenza's retired former partner, who returns to testify in a years-old case. Just one wrinkle: George is now called Georgette, and the D.A. fears that Georgette's sudden change in appearance will impugn her credibility as an expert witness. When delicate nudging doesn't work, Provenza gives it to her straight. Armed with a roll of duct tape, he barks: "Strap 'em down, lose the dress and cut the hair!"

2. Best Last Dance: On the season finale of So You Think You Can Dance, Russell Ferguson surprises America by beating fan favorite Jakob Karr. The krumper's victory was particularly poignant, as he was injured earlier in the night and spent much of the evening on a stool.

1. Saddest Finale: Suffice to say, we weren't what you call Rita fans. Nevertheless, the Dexter finale moves us with the shocking news that Trinity has killed the mother of three and left baby Harrison to cry in a pool of his mother's blood. "I thought I could change what I am," Dexter says in voiceover. "Keep my family safe. But it doesn't matter what I do. What I choose. I'm what's wrong. This is fate." Chilling! 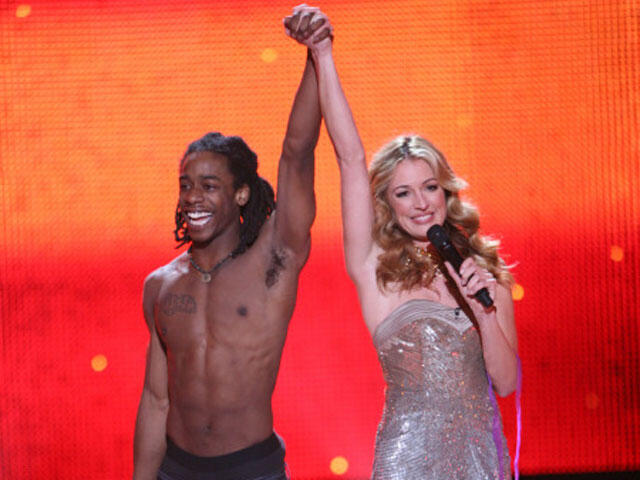