here! With Josh and Sara

Dance is hoofing on up in the world.For the first time ever, the award for Outstanding Choreography will be presented at the Primetime Emmy Awards ceremony Sunday night (8 pm ET / 5 pm PT, CBS), accompanied by a big dance number created by the nominated choreographers. "We were all freaking out," Sonya Tayeh, who received a nod for her moody and mesmerizing routines on So You Think You Can Dance, tells TVGuide.com.

Project Runway Favorites: Where Are They Now?

Project Runway (Wednesdays at 9 pm/ET, Bravo) has certainly had its share of colorful characters &#8212; and inspired creations &#8212; over the past four seasons. So which of the reality hit's wannabe designers have found a pattern for success? We checked in with the winners and notable also-rans to find out just what they're up to now. Wendy PepperVirginia mom Pepper, the controversial dark-horse finalist from PR1, is sticking close to home. Her new line, Pretty World, is being sold exclusively through Highcliffe Clothiers, right down the street in Middleburg, Virginia. "I walk to work and make my line at the shop," says Pepper, 43. "First come, first served!" She extended her Bravo career on Celebrity Poker Showdown and Battle of the Network Reality Stars, and she doesn't rule out returning to TV &#8212; "Never say never!" Jay McCarrollAfter winning PR1

Project Runway&#146;s Jay McCarroll is bitter towards Bravo. Two years after the show wrapped, the designer is still without a fashion line or financial prospects. &#147;What I needed was someone to sit down with me and say, &#145;Here&#146;s how you start a fashion label,&#146;&#148; the Season 1 winner said in the Aug. 13 issue of New York Magazine. After winning the top title, McCarroll discovered that if he accepted the show&#146;s $100,000, 10 percent of his brand would be forever owned by the Weinstein Company. So he turned down the prize but has yet to find his footing in the fashion world. That&#146;s not to say that all the contestants on the Bravo reality show are in the same boat. Season 2&#146;s Austin Scarlett is the creative director of a bridal line, while winner Jeffrey Sebelia sells his clothes in major L.A. stores. Meanwhile, McCarroll is struggling. In response to the New York story, he recently posted a video on YouTube depicting himself as a homeless man with ...

Bravo has announced a Feb. 22 premiere for&nbsp;the Project Runway spin-off Project Jay, chronicling Season 1 champ Jay McCarroll's adventures in the New York City fashion biz.... Sheryl Crow has joined the star-studded lineup of Animal Planet's Trail Mix, a Jan. 29 special about (and I quote) "the special bond between some of the music industry's hottest acts and their horses."... CMT has acquired rebroadcast rights to NBC's Three Wishes and has the option to license any new episodes produced beyond the 10 that have aired. 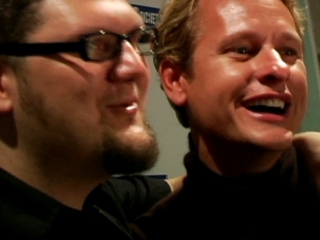