Postmortem: The Vampire Diaries Boss Breaks Down That Final Scene

[Spoiler alert: The following interview reveals important plot points from&nbsp;Thursday's&nbsp;episode of&nbsp;The Vampire Diaries. Read at your own risk!] The Vampire Diaries&nbsp;staged an epic homecoming&nbsp;on Thursday, and in more ways than one. "The World Has Turned and Left Me Here" turned out to be quite the bloody affair. But while Tyler (Michael Trevino) accidentally caused a deadly turn of events at the Whitmore College event, over in the '90s, Damon (Ian Somerhalder) and Bonnie (Kat Graham) finally achieved some success with their own planned homecoming as the trapped Salvatore finally escaped &mdash; sadly, without Bonnie by his side. How will Damon's return affect Elena (Nina Dobrev), who's had her memories of their love erased? Will he snap Stefan (Paul Wesley) out of his funk? Does Bonnie still have a chance at her own return? Executive producerCaroline Dries&nbsp;answers all of those burning questions and more!

[Spoiler alert: The following interview reveals important plot points from Thursday's episode of The Vampire Diaries. Read at your own risk!]

The Vampire Diaries staged an epic homecoming on Thursday, and in more ways than one.

"The World Has Turned and Left Me Here" turned out to be quite the bloody affair. But while Tyler (Michael Trevino) accidentally caused a deadly turn of events at the Whitmore College event, over in the '90s, Damon (Ian Somerhalder) and Bonnie (Kat Graham) finally achieved some success with their own planned homecoming as the trapped Salvatore finally escaped — sadly, without Bonnie by his side. How will Damon's return affect Elena (Nina Dobrev), who's had her memories of their love erased? Will he snap Stefan (Paul Wesley) out of his funk? Does Bonnie still have a chance at her own return? Executive producerCaroline Dries answers all of those burning questions and more!

How did you decide on how long Damon would be gone?
Caroline Dries:
We wanted it to feel like we were committed to this idea that he was yanked out of existence. We thought, what's the character story we can tell? His emotional journey was, "I must get home to be with Elena and reunite with my brother," but really what he was going through is, "I'm enemies with Bonnie." Through this whole situation with Kai (Chris Wood) where they need him but hate him, Damon starts to form this bond with Bonnie, so we felt like once that arc was complete, then OK, that story is over for Damon, it's time to move on for his next chapter. It worked out perfectly with what we were trying to do with Elena which was jumpstart her new journey post-relationship with Damon.

The last scene for Bonnie and Damon, which mirrored the Season 5 finale, seemed to signify that the story was coming full circle.
Dries:
It felt like we had earned this because the characters have known each other for five seasons on the show and have had this rocky relationship, so when we threw them together it was perfect because you don't want somebody to be trapped in a prison world with their best friend.

What are the immediate implications for Elena, who no longer remembers that she and Damon were in love?
Dries: She's going to experience a lot of expectations riding on the moment of Damon and Elena coming face-to-face once again. Can their love break through the compulsion? Will she look at him and fall back in love because it's him? Will she run for the hills? There are a lot of questions we're building to, so we're going to try to milk that moment and make it as big of a deal as we've been leading up to. It's a test [of] their relationship as a couple and it's a huge hurdle they'll have to overcome. Is it possible to start fresh? Or will she just remember him as the guy who killed her brother? To me it adds a huge layer of conflict without it feeling contrived, because he really did all of those things. So it's her giving herself a reality check at this time in her life when she's doing well in school and she has this cool guy Liam (Marco James). She's trying to weigh her options and it becomes this eternal struggle of, "Which road do I take?"

Will Damon realize that it might've been easier to remain stuck in another decade than to come home?
Dries:
In hindsight he'll make that comment, and it is that way. He had all the hopes and dreams of reuniting with Elena and he comes back to realize the Traveler spell is still in effect, the love of his life has forgotten she ever loved him, Stefan is off living some other weird life — it's not the homecoming he was expecting.

How does Damon's return affect Stefan?
Dries: We really tried to get Stefan to his lowest point right before Damon came back and so it's not going to be immediate — nothing with Stefan is a swooping shift in his personality — so he's going to be thrilled Damon is back but there's still a lot he needs to clean up. He made a bit of a mess in his life after Damon left and it'll be picking up the pieces. He made an enemy of Enzo (Michael Malarkey), he ruined his friendship with Caroline (Candice Accola), so having Damon back is just one piece of the puzzle in his life, but he's got a lot of other sh-t to deal with.

Will there be a friendship triangle between Alaric, Damon and Enzo?
Dries:
It's funny, we have so many boys on the show and we're trying to make it so they're not competing with each other for Damon's attention. Enzo is more of a villain and that's more an overarching season dynamic we'll play between him and Stefan and Damon, whereas with Alaric (Matt Davis) they'll immediately be feeling out what their relationship is now that Alaric compelled away Elena's memories of Damon.

TV transformations: Beauties behind the beasts

What you can say about Bonnie now that she's been left behind?
Dries:
Damon believes she was left for dead, so he's struggling with the guilt of having gotten out when she sacrificed herself for him. With Bonnie left behind with Kai we'll see basically a horror movie for her and she's desperately trying to find a way out without letting Kai back. It's this endless bad dream for her.

How much will everyone else learn about what happened during Damon's time away?
Dries: When he comes back he has the opportunity to tell them exactly what happened or lie and cover up the truth in order to protect people's feelings. He chooses the latter, hoping that's the right choice to make and that everyone will be able to accept it better without having to go through the whole death of Bonnie again. You'll see how they start to become aware [that] Bonnie actually is alive, and their mission is to get to her.

Caroline was clear about her feelings for Stefan. Will their relationship finally pick up?
Dries: It will pick up slowly but surely, but she is really hurt, especially after he dumped Ivy in her life. It was the icing on the cake of ruining their friendship in her mind. But Caroline is going to be going through some stuff that in her mind will allow Stefan to come back into her life. Their relationship will continue to be friends, but now that Caroline has these deep feelings, every time they're in a scene together it still feels charged — so we'll continue to play their friendship-romance situation hoping some good juice will come out of it.

There was a scene where Liam and the girl Elena saved gave each other a look. How should we read into that?
Dries:
Liam is a super ambitious, kind of cocky med student and the notion that Elena could have saved somebody that was supposed to die really affects him not because he's so egotistical, but because he's scientific. It's going to gnaw at him and it'll become a sticking point in their relationship.

What can you say about Tyler and Liv (Penelope Miller)?
Dries:
My favorite love story of the season is the one we're playing in the background with the Tyler and Liv situation. What she does by killing the kid so it doesn't trigger the werewolf gene is a pretty big sacrifice. She's so hot and cold, so it'll be fun to show more of her past and for us to understand why she acts the way she does toward the boys she likes, and we start to link her to the bigger mythology of the season.

Although we didn't see Sarah in this episode, we know she's a Salvatore. Will she tell anyone?
Dries:
As she starts digging it gets the attention of Enzo, and once she engages him she becomes this time bomb of information.

And how will the dynamic between Tripp (Colin Ferguson) and Matt (Zach Roerig) change now that we know he's a vampire hunter?
Dries: Tripp will start to reveal himself as more of a mentor figure to Matt and test Matt's allegiances and make him question what he believes. Is it OK to be friends with vampires even if they kill people? Or do you have to draw the line even though these are [your] friends? So he makes Matt ask all of those questions and of course it doesn't end well for anyone.

Are you excited Damon's back? Share your thoughts on the big episode in the comments!

The Vampire Diaries airs on Thursdays at 8/7c on The CW. 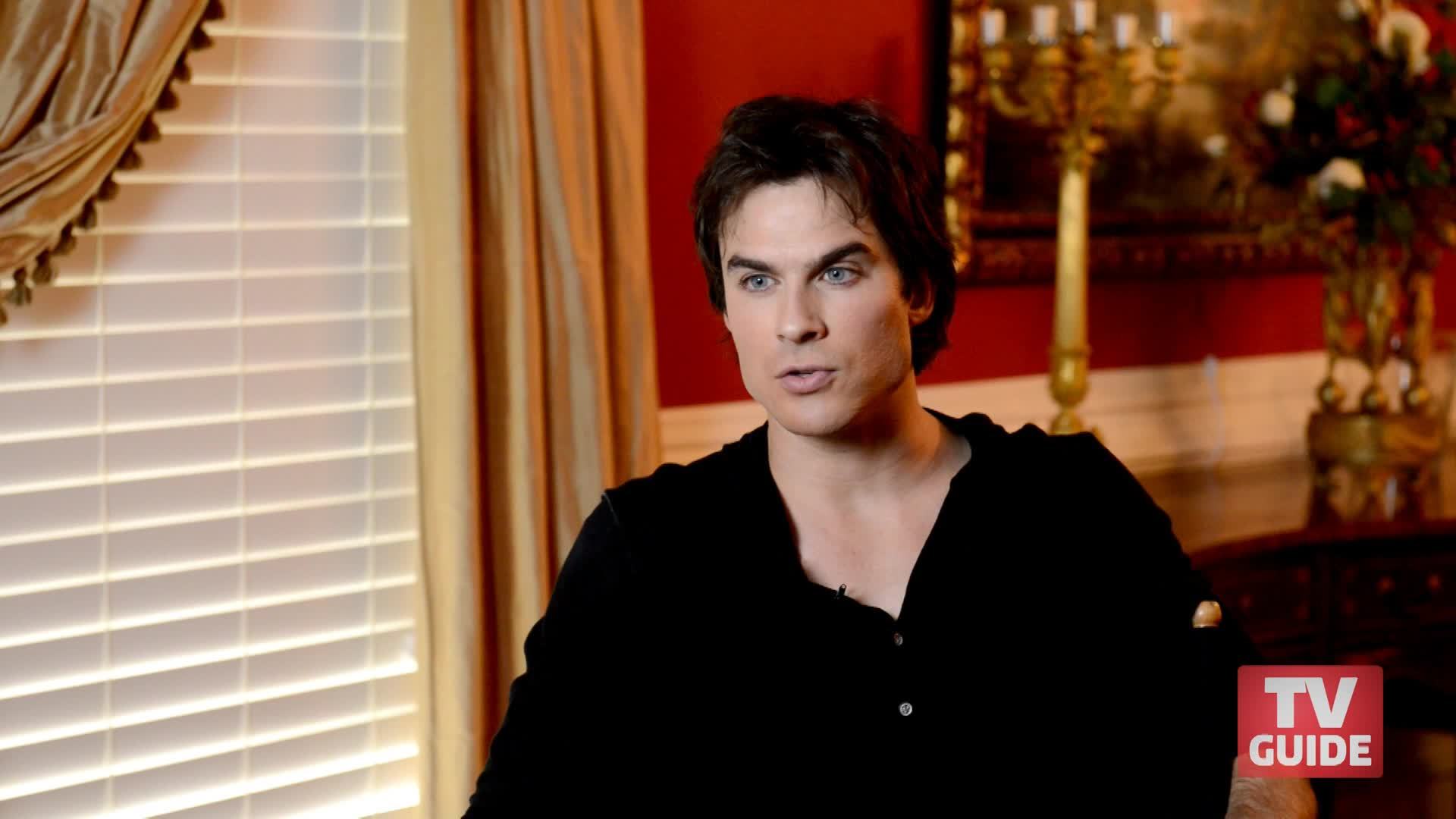