If Revenge fans thought Conrad Grayson couldn't get any more conniving, just wait until Sunday's episode. "You'll see with this episode just how hideous a man Conrad Grayson is," Christa B. Allen, who plays the daughter to Conrad (Henry Czerny), tells TVGuide.com. "His actions in this episode really cement the idea that Charlotte will probably side with her mother."

"You'll see with this episode just how hideous a man Conrad Grayson is," Christa B. Allen, who plays the daughter to Conrad (Henry Czerny), tells TVGuide.com. "His actions in this episode really cement the idea that Charlotte will probably side with her mother."

Since the debut of the ABC series last year, Charlotte has constantly gone back and forth between supporting her father, hating her father, siding with her mother Victoria (Madeleine Stowe) and despising her mother. And for good reason. The feuding parents have essentially used their daughter as a pawn for whatever scheme they were planning against each other. But when Season 2 picked up, Charlotte was the only person to know her mother didn't actually die in the finale's plane crash, but was instead hiding out. When Victoria reluctantly came forward, of course lying about the reason for her disappearance, Charlotte stood by her as the family presented a united front to the public. Unfortunately, Charlotte was deemed an outsider by the Graysons when Victoria announced Charlotte was the product of her affair with the wrongly accused David Clarke (James Tupper).

"The Grayson family as a whole has been in the public eye for as long as Charlotte can remember so she's quite used to the attention, but the fact that and Victoria said 'my affair' is a big deal," Allen says. "There will be some negative attention [although] it's one more thing that will ultimately end up strengthening this girl."

While Charlotte started off as a somewhat lost girl, she's finally making connections to people around her rather than pushing them away. She's put her trust in Emily (Emily VanCamp) and she's excited that Amanda (Margarita Levieva), who she thinks is her half-sister, is pregnant. Although she could find out the truth soon, Allen hints. "There is a character who knows Emily is not who she says she is, a character who's not on Emily's side, and could very potentially use that against her and release that information to the public. So if that came out then Charlotte would know who her real sister is." (Our money is on Ashley.) And then there's Declan, whom she hurt in Season 1, but continues to stick by her. "Declan is a staple in Charlotte's life and though he hasn't known up until this point how to handle the craziness happening in her life, he's learning. He's very much a rock and whether or not they're dating they'll always be close," she says.

Although viewers have seen both the bratty and scheming side to Charlotte and the girl just wanting to be loved, Allen says the introduction of Victoria's mom, played by Adrienne Barbeau, will provide more insight to where Charlotte comes from and who she could turn out to be.

"You see Mrs. Harper show up at the door and know that's definitely Victoria's mom," Allen says. "Seeing that 'like mother, like daughter' dynamic between them helps you to understand the mother daughter-relationship between Victoria and Charlotte, and I do think it sets up that possibility that Charlotte is like the rest of the Harper women."

Revenge airs on Sundays at 9/8c on ABC.

Watch a clip of Charlotte, Emily and Victoria below: 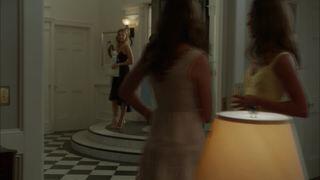