On the Set of The Nate Berkus Show: How the Designer Turned a Set Into a Home

When designer Nate Berkus was given his own daily syndicated talk show, his director told him he had two choices for the set: "It could either look like a night club or it could look like a fake house with stairs that lead to nothing," the director said. Berkus said no to both. Berkus, 39, spent the summer before the September launch designing the studio with vintage furniture, old books that he's read, a wall of live greenery, and colonial wall detailing. From the moment the audience members take their seats, they're in Berkus' home, not on his set.

When designer Nate Berkus was given his own daily syndicated talk show, his director told him he had two choices for the set: "It could either look like a night club or it could look like a fake house with stairs that lead to nothing," the director said.
Berkus said no to both.

Berkus, 39, spent the summer before the September launch designing the studio with vintage furniture, old books that he's read, a wall of live greenery, and colonial wall detailing. From the moment the audience members take their seats, they're in Berkus' home, not on his set.

"Your home should rise up to greet you and the set really is an extension of that," he tells TVGuide.com in his green room.

In 2002, a spiky-haired Berkus was plucked from his Chicago design firm to head up a project for Oprah Winfrey. He transformed a 319-square-foot studio apartment by using every inch of space, including doubling a closet as an entertainment unit and adding three rows of cabinetry to the tiny kitchen. "Nate Berkus, people, remember that name," Winfrey said on that show.

For nine years, Berkus made monthly appearances on Oprah, offering design expertise for those who couldn't afford it, those who lost their homes, or just had plain-old bad taste. He says he's grateful for his work with Winfrey, but relishes being able to help others who are either financially or design-challenged on a daily basis.

The Nate Berkus Show launched as a one-hour syndicated program Sept. 13. Just as being on camera seemed effortless during his first Oprah Winfrey Show appearance, Berkus says he was never nervous about going out on his own. "I'm not the type of person that stops to think, 'Can I do this?'" he says.

As a daily design show, it has literally transformed before the viewer's eye, but it hit its stride with continuing segments like the "While You Were Sleeping" makeovers, in which Berkus and his team sneak into someone's home in the middle of the night and make it over by the morning. On "House Pride," he showcases  viewers' homes that they've designed impeccably themselves. The "Instant Design Studio" uses technology that takes a picture of a room in an audience member's home and demonstrates what Berkus would do with the space. "I still have those moments where I'm in the back of the car going to someone's house and I've got my car full of producers and we're going to surprise somebody and ring the bell — and I know that's going to be the moment as soon as my finger hits the doorbell that things are going to change. I'm so lucky to have a daily show that allows me to continue to be the guy that does that for people," he says.

Like most talk shows, The Nate Berkus Show has celebrity guests, but Berkus was very clear that he didn't want stars on for straight-up interviews. "The message we sent was, I'd love to have you on the show, but you need to either come ready to play with me, show me how you live, show my audience how they can recreate how you live, share things you haven't shared with anyone else, and join me in doing something for somebody else."

One of Berkus' qualities that shine through on his show — and in person — is his relatability, perhaps because he never wanted to be a big star. "I didn't necessarily want to be famous growing up, but I knew I would be a good famous person because I'm not offended if somebody comes up to me and knows things about me and wants to engage me in a conversation," he says. Conversely, Hollywood doesn't phase him either.

"I've never been that taken with celebrities, so it's not like I love that person so much I want to find them a sofa. I really enjoy the people who can't afford it and don't have the know-how to figure out how to make something come together."

An upcoming segment with Jennifer Nettles, the lead singer of Sugarland, is a prime example of his celebrity philosophy. "Jennifer Nettles is really passionate in green design and reusing found objects. [On the show we] we give interesting ideas on how to use what most people think is trash in a really stylish way," he says.
Not only did Nettles show how she lives and how she decorates, but on the episode, she surprises her ultimate fan. Because at the end of the day, Berkus is about bringing his show to the viewer, being accessible, and celebrating those whom he inspires.

"That's what I am really here to do — to be that guy with his finger on the doorbell and all of a sudden [everything] changes."
Watch a clip from The Nate Berkus Show with guest Jennifer Nettles, airing Friday. Check your local listings for time. 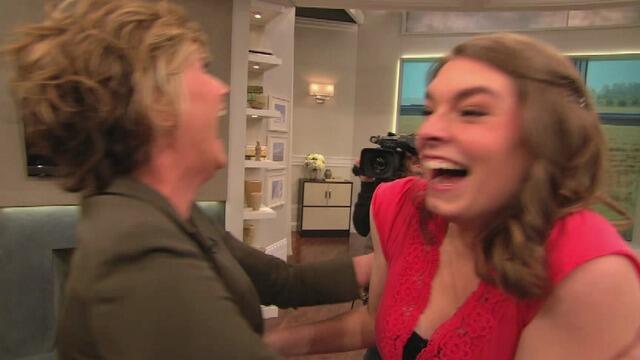