Our top TV moments of the week: 11. Worst Delivery: During the announcement of the Screen Actors Guild Awards nominations, Rizzoli &amp; Isles star Angie Harmon jokes that there's a name missing from the list of TV drama actress contenders: hers. "I'm confident Angie Harmon is in there for Rizzoli &amp; Isles," she says. "I said it," co-announcer Rosario Dawson says, playing along. "Yeah, that's totally fine. It's fine," Harmon says. Crickets. 10. Most Feel-Good Moment: Just when The Sing-Off's Jerry Lawson and the Talk of the Town put on their...

Our top TV moments of the week:
11. Worst Delivery: During the announcement of the Screen Actors Guild Awards nominations, Rizzoli & Isles star Angie Harmon jokes that there's a name missing from the list of TV drama actress contenders: hers. "I'm confident Angie Harmon is in there for Rizzoli & Isles," she says. "I said it," co-announcer Rosario Dawson says, playing along. "Yeah, that's totally fine. It's fine," Harmon says. Crickets.

10. Most Feel-Good Moment: Just when The Sing-Off's Jerry Lawson and the Talk of the Town put on their "good sport" faces as they face elimination, Nick Lachey surprises them and tells them that because the judges couldn't decide, all four groups will advance to the live finale.

9. Best Exit: Survivor fans have seen their share of dramatic exits this season (Shannon, NaOnka), but who knew that eccentric mama Jane — who just last week held a funeral for a dead chicken — would make one of her own? Facing her exit, Jane says that Holly deserves to go to jail and tells Dan and Fabio that they're really next on the firing line. Whose goose is cooked now?
8. Enough Already Award: How many times are we supposed to watch Dexter's Deb get thisclose to catching her brother in the act? The Season 5 finale wants us to do it one more time, when she comes face to face with Dexter and Lumen holding their murder weapons after a kill with only a dirty plastic sheet obscuring their faces. Her compassion for the "vigilantes" lets her brother and Lumen get away with murder, but the writers are certainly not off the hook for taking us down this narrative path yet again.
7. Best Digression: Comic couple Anne Meara and Jerry Stiller (aka Ben Stiller's mom and dad) provide plenty of laughs between turns of a game of charades on Late Night with Jimmy Fallon. When Meara hears Fallon refer to The Roots, his house band, she tells the audience that she recently had her roots done. Later, she asks if the band is named in honor of the famous TV miniseries. Only old-school comics can get away with that kind of edgy.
6. Girl Power Award: It only took 17 seasons, but The Amazing Race finally breaks through the glass ceiling when Nat Strand and Kat Chang become the first all-female team to take home the $1 million grand prize. Now the question is: Will senior citizen Racers ever win?
5. One of Our Favorite Things: Nothing will ever top Saturday Night Live's legendary parody of the commercial orgy that is Oprah's Favorite Things, but How I Met Your Mother does a pretty respectable and hilarious job. Barney wants to do something important with his life after learning that Marshall and Lily are having a baby. So he takes his Christmas bonus and showers all of MacLaren's patrons with his favorite things, including a remote-controlled helicopter, a velour track suit, condoms and a trip... to a strip club. What, no laser tag?

4. Best Time-Wasters: A typical talk-show appearance to plug his new HBO special would just be too easy for Ricky Gervais, so instead he and Jon Stewart just kind of hang out on The Daily Show set and talk for a bit. They weigh the prospects of a Stephen Hawking-hosted talk show and the odd giddiness of former British Prime Minister Gordon Brown when he appeared on the show. There is also a lot of talk about Gervais' "arousing" physique. It's much ado about nothing, in the best possible way.

3. Best Shot at Redemption: Just when fans of The Good Wife think Alicia is ready to give Will a chance, her husband Peter throws himself back in the race for her heart when he curses during a live political debate to protect her. Whether it's because he's scared of the answer (has she really forgiven him for his infidelities?) or it's just a ploy to boost his numbers, we don't yet know. But TV writers, take note: This is how you do a love triangle.
2. The "Who Saw This Coming?" Award: Who needs to turn over a table when you have an irascible psychic medium in the house? On The Real Housewives of Beverly Hills, the real Allison Dubois (aka the Medium lady) reluctantly gives the gals a reading at a dinner party. She tells Kyle that she will never be emotionally fulfilled by her current husband, who will leave her after the kids move out. And then it gets ugly! Dubois finally takes her leave of the latest batch of Bravo beauties, but not before presenting them with a double middle-finger salute. But was it all just a nightmare?
1. Worst Tantrum: Given Kate Gosselin's incessant whining during her season on Dancing with the Stars, we probably could have guessed that she would not be a fan of camping. So kudos to TLC for making her do it anyway during an appearance on Sarah Palin's Alaska. She moans, groans and cries about the spartan conditions ("Why would you pretend to be homeless?" she asks the camera. "I just don't get it.") while a chipper Palin family entertains her brood. Gosselin, ever the solid role model, threatens to disown her kids — who are enjoying the trip — if they don't leave with her. "OK, goodbye. You're now a Palin, not a Gosselin," she says. We haven't seen her this miserable since her last days with Jon.
What were your top moments of the week? 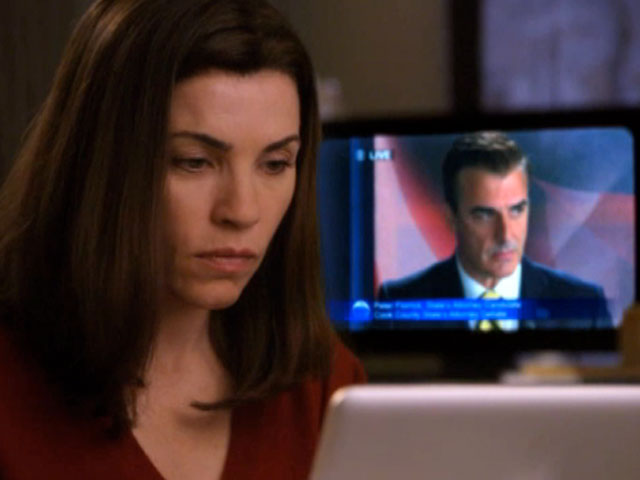