Every week, editors Mickey O'Connor and Adam Bryant satisfy your need for TV scoop. Please send all questions&nbsp;to megascoop@tvguide.com. Since 24 is almost over, everyone is going to die now, right? &mdash; Mark G.MICKEY: Wow, that's a dark spirit you got there, fella. Welcome! The continuing movie talk has squelched the idea of Jack making the ultimate sacrifice in the series finale. But I do know of two surprising deaths that will take place before the show's May 24 finale. One will be shockingly emotional; the other will just be shocking. What do you guys know about the Grey's Anatomy season finale? &mdash; StephanieADAM: Here's what we know: The finale features a

Every week, editors Mickey O'Connor and Adam Bryant satisfy your need for TV scoop. Please send all questions to mega_scoop@tvguide.com.

Since24 is almost over, everyone is going to die now, right? — Mark G.
MICKEY: Wow, that's a dark spirit you got there, fella. Welcome! The continuing movie talk has squelched the idea of Jack making the ultimate sacrifice in the series finale. But I do know of two surprising deaths that will take place before the show's May 24 finale. One will be shockingly emotional; the other will just be shocking.

What do you guys know about the Grey's Anatomy season finale? — Stephanie
ADAM: Whatever it is, it's going to be big. Creator and executive producer Shonda Rhimes would say only this: "Fans should brace themselves. That's the only way to put it: Brace yourself," she tells us. "We're going to take you on a ride for the last two hours of the season, and when the ride is over, none of our characters are going to be the same. It's very different in comparison to the other finales."

They wouldn't kill Alaric in the season finale of The Vampire Diaries, would they? Matt Davis is my favorite on that show! — Carrie
MICKEY: "I had a lovely conversation with Kevin Williamson a week or so ago about the future of Alaric, and I must say, it looks bright," the artist formerly known as Warner Huntington III told us. So it seems he'll survive the season finale's apocalyptic Founder's Day celebration. In fact, we're hearing that Davis might be promoted to a series regular in the fall.

How will Jane react to Kristina Frye this time around on The Mentalist? — Jake
ADAM: The relationship really isn't much different, according to Leslie Hope. "They're essentially playing in the same ballpark. It's flirty," Hope says. "As determined as he is that she's a fraud, she's determined that he's for real." Of course, one thing is different, Hope says: "We definitely go on a date — twinkling lights, candles on the table, fancy silverware and everything. It's a real date."

How willDesperate Housewivesfollow the serial killer and Angie storylines? — Pilar
MICKEY: Well, there's an interesting pebble about to be dropped into Fairview Pond, and its effects will ripple outward through next season. It seems that one of the Wisteria Lane offspring is not who he or she seems — and no, I'm not talking about Eddie or Sam.

Please give me some scoop about Private Practice's finale! — Pauline
ADAM: We've already told you that one couple gets engaged before Season 3 ends, but it sounds like there will be more than one happy ending. "Almost everybody gets hooked up, but not necessarily with who you think they might get hooked up to," Amy Brenneman tells us. "It kind of reminds me of a Shakespeare play because most everybody is holding somebody's hand by the end."

Any 30 Rockscoop? — Gèrard
MICKEY: The May 6 episode, appropriately titled "The Moms," will mark the return of Elaine Stritch, Jan Hooks and Anita Gillette as the mothers of Jack, Jenna and Liz, respectively. Better yet, we'll meet Tracy's mom for the first time. Any guesses on who plays her?

Have you heard anything new about Tony and Ziva on NCIS? — Ashleigh
ADAM: When Brian Dietzen joked with us that his character has no one in the office with whom to double date, he did make one clarification: after next week's episode, "I think Jimmy might be able to ask Tony if he wants to go double date," Dietzen says. We know that the episode sees DiNozzo taking interest in a reporter connected to a case, but could that be a red herring? "It might not be who it seems actually," Dietzen says.

OK, so they're going to Hawaii. What else is happening on Modern Family? — Meg
MICKEY: In the season finale, Claire will attempt to get the gang together for a family portrait in which everyone is supposed to wear white. Feel — that is, Phil — will find himself in yet another compromising position when he's alone with Gloria. And a miscommunication could lead to a kiss.

Seems like Clois sex is on the table on Smallville. Is it going to happen this season? — Erin
ADAM: As you point out, both Lois and Clark definitely seem up for it. As for whether they'll actually seal the deal this year, there's just one little problem, according to executive producer Brian Peterson: "They keep trying, but sadly and ironically, the Blur has come between Lois and Clark [to prevent them from] ever consummating their relationship." I'll leave you to argue (cry?) about Peterson's use of the word "ever."
I love Zoey on Nurse Jackie. What's coming up for her? — Amy Z.
MICKEY: Zoey is thanking God that she isn't pregnant, but a "God" of a different sort will show her the light, especially when it comes to her flirtation with Lenny.

Breaking Bad has been amazing. What's next? — Marty
ADAM: Pardon the hyperbole, but this Sunday's episode features the greatest moment in this terrific series' history. (And it's not even the scene which will surely serve as Aaron Paul's Emmy tape.) All we'll say is this: Hank finds himself unarmed at a very bad moment.

Reader Quote of the Week: "No, Jay is not a boob. Everyone likes boobs." — ZigZagZoey, commenting on David Letterman's assertion 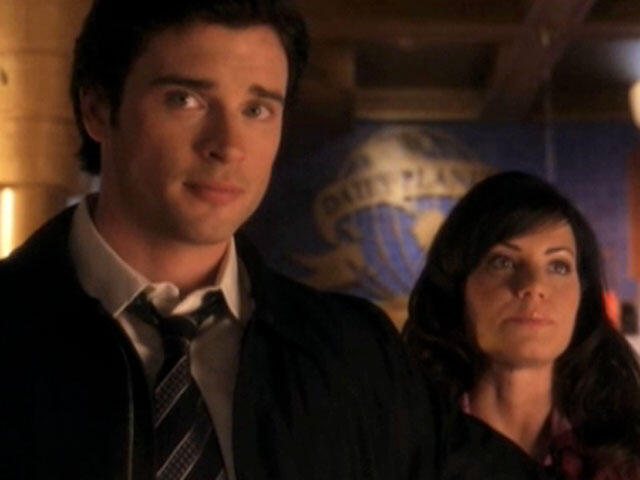