It's not easy being Grimm.When Grimm returns for its fourth season on Friday (9/8c, NBC), Det. Nick Burkhardt (David Giuntoli) will have to wrestle with being a Grimm who's lost his powers thanks to a wicked Hexenbiest spell. But does that mean he's still a Grimm? "Season 2 is a lot about identity," co-creator David Greenwalt tells TVGuide.com. "Not 'Who am I?' so much as 'Who should I be?'"

It's not easy being Grimm.
When Grimmreturns for its fourth season on Friday (9/8c, NBC), Det. Nick Burkhardt (David Giuntoli) will have to wrestle with being a Grimm who's lost his powers thanks to a wicked Hexenbiest spell. But does that mean he's still a Grimm? "Season 2 is a lot about identity," co-creator David Greenwalt tells TVGuide.com. "Not 'Who am I?' so much as 'Who should I be?'"

Fall Popularity Contest: Which new shows won you over? Vote!

That theme extends to the first two episodes, in which the gang encounters a Gedachtnis Esser, aka Octopus-head Wesen, which steals a person's memories. "This explains identity theft on a whole other level," Greenwalt says. "You are your memory; it's the most precious thing you have. What happens if someone can steal your memory? And then we thought, what if we could steal the memory of people who really important in the defense industry?"Below, Greenwalt and co-creator Jim Kouf break down what else we can expect in Season 4:Nick Where were we? The Grimm unfortunately thought he had sex with his girlfriend Juliette (Bitsie Tulloch), which normally isn't a bad thing. But when she's actually the wicked Adalind (Claire Coffee) in disguise, that means huge consequences: namely losing your powers as a Grimm.What's next? "He's in pretty deep shock," Greenwalt says. "It's a big liability [not being able to identify Wesen], but also it poses a moral question of, 'Would I be better off not being a Grimm?' and more importantly, 'Would Juliette be happier were I not a Grimm?' and 'Could we maybe attempt to have a normal life? Even though if we had kids, God knows what would come out of there with a Grimm in the mix.'"Monroe and Rosalee (Silas Weir Mitchell, Bree Turner) Where were we? The Blutbad and his lovely Fuchsbau tied the knot... only to have their wedding interrupted by the grim tidings (ha!) of Nick losing his powers and Trubel (Jacqueline Toboni) scaring their Wesen wedding guests by revealing that she's a Grimm.What's next? "The honeymoon is ruined, but their friends feel very guilty about that," Greenwalt says. "They're going to try to make that up to them in some way, shape or form. Also, a terrible, terrible threat is going to come to them because they're married to each other. A kind of a KKK story. There are they in Wesen land that don't like mixed marriages and will maybe go to any lengths to punish them that crosses that line. It's going to be really dangerous and really frightening." Also expect to see the couple try to figure out a spell to reinstate Nick's powers.

TV Transformations: Beauties behind the beasts

Hank (Russell Hornsby)Where were we? The detective had just walked Rosalee down the aisle before all hell broke loose.What's next? "There's going to be sort of a Tuesdays with Morrie sort of episode involving him and a mentor," says Greenwalt. "There may be a Native American vision quest that he has to go through to accomplish something in one of the cases."Theresa "Trubel" RubelWhere were we? Thanks to Nick's intervention, Trubel discovered that she wasn't crazy but that the frightening creatures she saw were actually Wesen who woged. When she crashed Nick and Rosalee's wedding in order to deliver vital news to Nick, the Wesen at the ceremony freaked when they realized her true nature.What's next? "Trubel and Monroe will be Nick's eyes and ears," Greenwalt says. "She still is a young woman who loves to eat and loves to go on adventures and loves not to take direction as it's given. She's a hell of a fighter and she's such a different kind of Grimm, she's a primitive Grimm. 'Why don't we just kill that guy?' Even Nick is like, 'No, you can't just go in and kill someone in a hotel lobby. You have to have evidence.'"Juliette
Where were we?
The veterinarian wasn't too pleased to find out that her boyfriend couldn't tell the difference between her and Adalind, even if there was a spell involved, and that he had inadvertently cheated on her.What's next? "Oh, it gets worse!" Kouf teases about Juliette's feelings of betrayal. Greenwalt adds, "She would like to have a normal life, but later she sees how incredibly important what he does is, not just to him but to the world at large. They need to work on getting Nick's power back, and there could be some side effects from that process. Let's just say she won't be the same person she was a year ago."

TV Wigs: Tricks or treats? Vote in our poll

Capt. Renard (Sasha Roiz)Where were we? The police captain had gone to Nick's house to warn him of Adalind's spell, but got gunned down by that FBI agent, who was actually one of the Verrat who served the royals.What's next? "He's going to see the white light, and there's not going to be much that modern medicine can do for him," Greenwalt said. "[But] I think inevitably there will be some shirtless rage." So there's that at least.Adalind Where were we? The Hexenbiest's newborn child was stolen in what looked to be a raid by the Verrat working for the royals, when in fact, Renard had staged the whole thing and had given the Hexenbaby to Kelly Burkhardt (Mary Elizabeth Mastrantonio). Adalind is fooled, however, and makes a deal with Viktor (Alexis Denisof) to get her baby back from the royals in exchange for rendering Nick Grimm-less.What's next? "She fulfilled her part of the bargain with Victor so she's on a plane to Europe," Greenwalt says. "She expects that he has the baby, and he doesn't have the baby. She's going to go through a tremendous amount of suffering again and almost an Alice in Wonderland kind of adventure. And then she's going to rise from the ashes like you've never seen."Sgt. Wu (Reggie Lee)Where were we? Wu is on the scene at Nick's house after Renard is shot, and while investigating the crime scene, he finds Grimm diaries full of sketches of Wesen, which then trigger his memories of the Aswang encounter.What's next? "Wu is headed for a meltdown," Kouf says. Adds Greenwalt: "He may even quit the force. Hank more and more wants to be the kind of mentor to Wu... if it's all going to come out in the wash and Wu is going to have to know. Wu is just going to be so pissed off and has had it up to here."

From Grimm to SVU: Check out TV's sexiest crime fighters

A New Hexenbiest: "They need to reverse-engineer whatever it is that Adalind did to him, and then you need a big-ass Hexenbiest to do that," Greenwalt says.

Schizophrenia Wesen: "We're going to explain schizophrenia in our way," Greenwalt says. What if you didn't just hear voices but saw a Wesen talking to you? You'd think you were out of your mind and you would be institutionalized and taking meds."

Heftigauroch: "We have a raging bull, like the fighter, but this guy is actually a raging bull, a little like a minotaur," Greenwalt says. "In that same episode, there's a Schinderdive, it's warthog-ish. He's sort of Don King in an extreme situation."

Luison: This wolf-like Wesen will appear in a story line that will be like Gaslight where someone is trying to convince another person that they are crazy.

Kallikantzaroi "It's about these goblin-like critters that appear before Christmas and wreak havoc. They hate Christmas, but they're fun and they're little," Greenwalt says. Kouf adds: "We explain one of the most important things about Christmas. John Gray of Ghost Whisperer is directing that episode."
Grimm kicks off its fourth season on Friday at 9/8c on NBC. 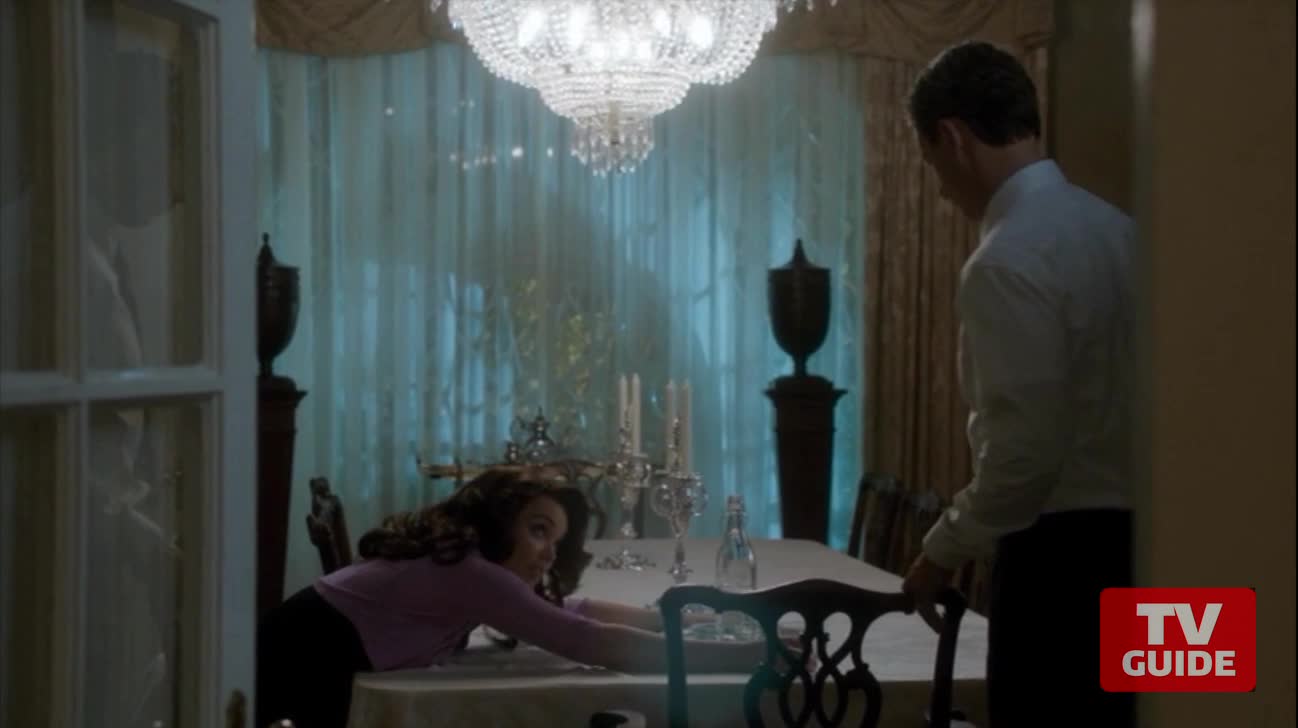