[Warning: The following contains spoilers for Sunday's Season 2 finale of Evil, "C Is for Cannibal." Read at your own risk!]

The first season of Evil ended with a murder. The second season ended with a different kind of transgression: a kiss. In the great Paramount+ drama's wild Season 2 finale, Kristen (Katja Herbers) was nearly driven to kill again after she found out Leland (Michael Emerson) has been in secret communication with one of her daughters, Lexis (Maddy Crocco). But after marching out the door with her go-to weapon, she found herself instead at David's (Mike Colter) doorstep.

In an emotional scene that Herbers acted the hell out of, Kristen came clean to her newly ordained friend. With David hearing her confession in full priest garb, she sobbed through the admission that she killed the serial killer Orson LeRoux (Darren Pettie), who had threatened her daughters in Season 1, and that she got away with it thanks to her cop friend Mira (Kristen Connolly). David forgave her, and in a devil of a cliffhanger, the partners gave in to two seasons of temptation and kissed — hot off David's ordination, with Kristen's wedding ring prominently displayed in the shot.

It was an episode for satisfying forbidden urges. "C Is for Cannibal," directed by Alethea Jones and written by Rockne S. O'Bannon, found the team investigating a college student's compulsion to feast on human flesh. He finally indulged in his craving with the blessing of Leland and Sheryl (Christine Lahti), who threw him a Rosemary's Baby-esque party that initiated him into The 60. It turns out they only let you into the demonic club if you consume the person whose sigil you're inheriting.

But it's the image of Kristen and David locking lips that fans will be left thinking about until Evil returns for Season 3. Herbers called up TV Guide from Holland to break down the partners' vulnerable moment, what it means for Kristen's marriage to Andy (Patrick Brammall), and what could push Kristen to kill someone else. She also dealt with a phone glitch that sounded straight out of an episode of Evil.

I want to start with Kristen's big confession to David. How did you work on figuring out how much Kristen should break down in that scene?
Katja Herbers: I think it's her completely laid bare, so I thought it should be as far as anyone can break down, really. I didn't have the episode [script] for a very long time before having to shoot it, but I work intuitively, so I just kind of meditated on it... That's kind of how I felt emotionally that it should be pitched, that first there's the confession of having killed someone — that's one thing, and the feelings that come with that. And then a few floors down from that, or like the lowest floor, is that she got away with it. That just wrecks her. And that's, I think, the thing that she's had to grapple with: her privilege, and that she had a friend [who's a cop], and that somebody else who would have done it, somebody who wasn't white and not the mother of four children who looked kind of like she's not a murderer, would have probably been in jail. I think that wrecked her.

Also, I thought at the end of that confession she needs to be at a very — you know that place when you cry a lot, and you just feel sort of empty but also clean and weirdly revived? Where you've really got it all out, and then if somebody's there and has witnessed that and can still love you with all of that sh-- out on the table, I think that's a pretty real connection and pretty special. So I liked that this kiss — obviously, "will they, won't they," we've been playing around with that a bit this season and the first season as well — that that moment happens not [when] they're just being cutesy-cute like they have been, but actually in a moment where she's completely naked for him. There's nothing that she's holding on to anymore. And I don't mean naked in a sexy sense. I mean it in the most unsexy sense. This is who she is: a murderer. And he still loves her. So I thought that was pretty beautiful, and that's also why I thought it should be this much [of a breakdown].

Evil Is the Best Show on TV Right Now

Did you know the season would end with this kiss before you got the script?
Herbers: No, I didn't.

What did you think when you got the scene?
Herbers: I loved the cliffhanger, but immediately I was like, "Oh gosh, I need to lock myself in a basement to try to get to this place emotionally to be able to play it." I couldn't lock myself in a basement because I was filming other scenes, but I was just looking at the work at hand. But I love the kiss. And I love that it happens in this way, and not in a way where they went to a bar and got drunk. Although I'm sure that would have also been fun. But this just seems so much more meaningful.

Do you have any thoughts on what you want to happen between them?
Herbers: Obviously something real happened, but, and look, this might be me being Dutch, but a kiss is also not the end of the world, you know what I mean? I don't think everything needs to, now, certainly, in Season 3, be that he's the stepfather of my children and now he's no longer a priest. I don't think that has to happen. I think it could happen, but I don't think we're tied to anything in that way. I just think that they'll have to deal with [the fact] that this happened and see where it goes after this, and I'm very excited to read what [showrunners Robert and Michelle King] will come up with. I'm sure it's something better than I could ever imagine.

It's interesting that this happened after David was ordained, and after Kristen was struggling with the fact that she had an affair, so it doesn't feel entirely positive —
Herbers: She didn't have an affair!

Sorry, she had sex with another man.
Herbers: She just used some random guy. She's maybe been having a kind of emotional affair with David.

I like the danger, in any case. This is happening at a really inopportune moment for both of them.
Herbers: Oh yeah, me too, absolutely. You mean after she kind of had a new start with Andy?

Yeah, and now she's technically cheating on him again. What do you make of her relationship with Andy?
Herbers: David is now the only one who knows the secret of her, and I don't think — I mean, we'll have to see, but she's emotionally so much closer to David now than she can be to Andy because of this. But I also think that she does generally love Andy and that they actually have quite a good marriage, in that there's trust and they have four wonderful children, and I just betrayed that trust. But also, I had to kill someone to protect our children! It feels like he should give me a pass for the cheating, because honestly, it's nothing.

There was a great exchange between David and Kristen last week, too, when David asked, "Would we be in love?" and Kristen nodded. What did you think of that moment?
Herbers: I love that moment because it was just walking a tightrope. And it's good that we said goodbye at the end of that. I also like the scene in the [earlier] episode, where, this was before I had my demon baby cleansing experience, but I tell him to not be a priest, and I'm sitting there in a chair, kind of in the same way that Renée sat in the chair in the first season. And so I kind of teased him into this last episode's question of, "Would we be in love?"

You mentioned that demon baby. Kristen called it a placebo effect when she reacted to that exorcism on the bathroom floor. When you combine that with the fact that she confessed to David — she's not religious, but she does seem to be taking comfort in the rituals of religion. Is that fair to say?
Herbers: I do think that she really thinks that it's a placebo effect, what happened to her on that bathroom floor, and that she was hallucinating. And that she hit rock bottom there. Giving birth to that demon child clearly had something to do with her worries about Lexis, maybe: maybe something being wrong with her. And I don't think that she's religious. And then with David — she wouldn't just go to any priest. That wouldn't have done it. She needs to tell her friend, and she does it in the context of this confession, which makes her able to say it. So yes, the ritual of the Catholic Church is very helpful to guide the conversation. And maybe she does believe in that moment that she's freed of that sin, but maybe more so because it's her friend who then kisses her afterwards and who still loves her, despite what she did.

The fact that Lexis has been talking to Leland is terrifying. How do you think Kristen might respond to everything with Lexis next season?
Herbers: I think if somebody's coming for my babies, I am going to have to do something. I don't think I'm now just a suburban Real Housewife mom. I'll have to protect my babies no matter what.

Do you think Kristen suspects that Sheryl is still up to something?
Herbers: You're sounding like there's some kind of weird stuff on your microphone. You actually sound like a demon right now.

Does Kristen still suspect Sheryl?
Herbers: She's had so much to deal with that she's just kind of forgotten that her mom could be a danger. She also doesn't know that she's still seeing Leland. And now Sheryl has her own sigil, so I clearly need to catch up on some things. I might have to kill my own mother. I don't know where this is going to go.

I know it's still a mystery, but I have to get your take on Kristen's missing egg. What do you think happened?
Herbers: Very likely it's a child, right? Somewhere. Or maybe they're keeping it, still. I mean, the only reason to take the egg is to make a little demon child out of it. So, oh boy. We're going to have Medea for Season 3. I'll have to kill a child of mine. I don't know! It's always better than the stuff I can come up with, but it's definitely terrifying.

Do I still sound weird?
Herbers: Yeah, I'm gonna have to exorcise my phone now. 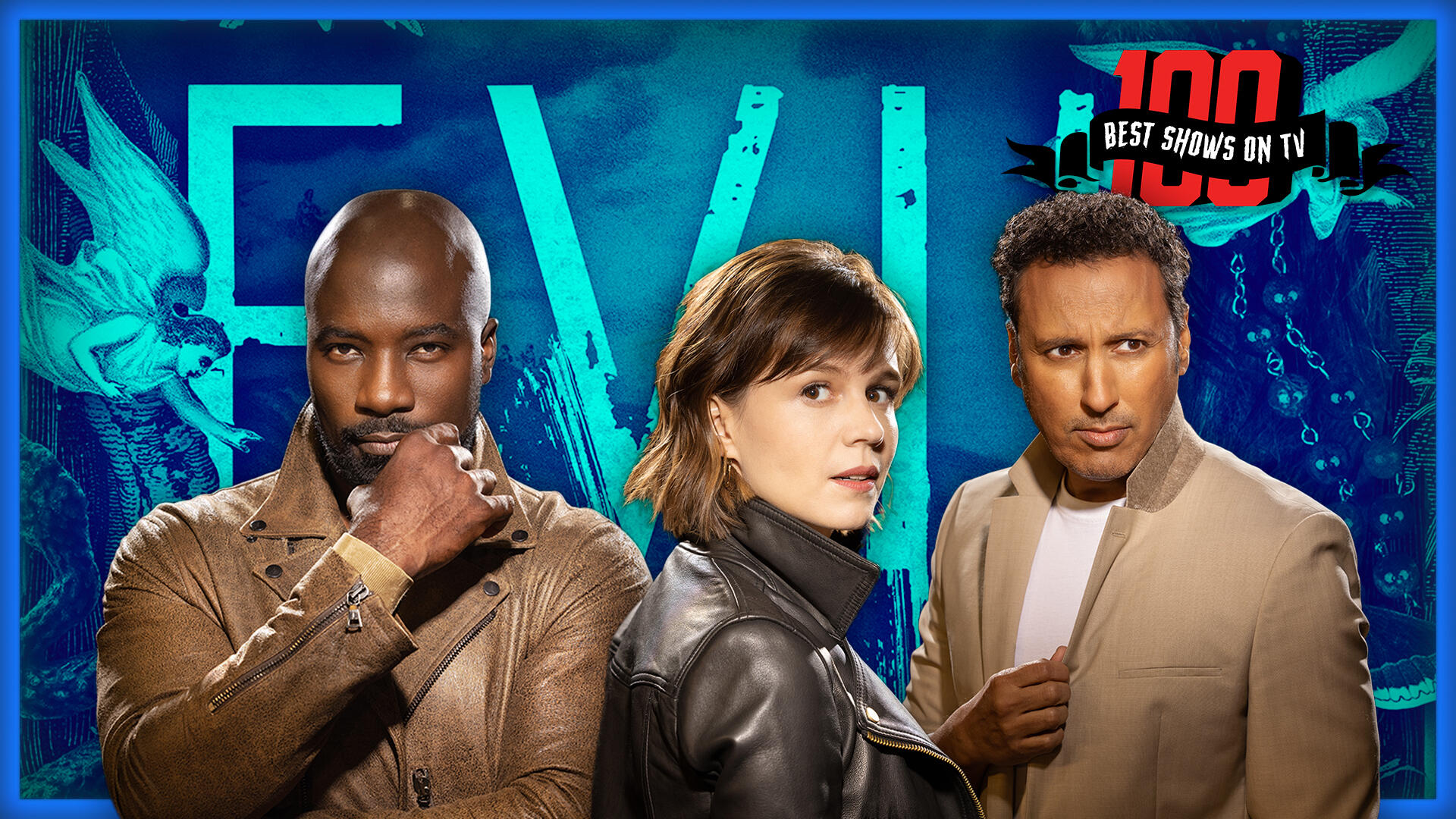 The Evil Season 2 finale is now streaming on Paramount+.