Television legend Ed McMahon, who's booming "Heeeere's Johnny" was a fixture of late-night TV for three decades and who thrived as a Tonight Show sidekick and jolly host of his own shows, has died. He was 86.McMahon's longtime friend and publicist, Howard Bragman, confirmed the death Tuesday.

Television legend Ed McMahon, who's booming "Heeeere's Johnny" was a fixture of late-night TV for three decades and who thrived as a Tonight Show sidekick and jolly host of his own shows, has died. He was 86.
McMahon's longtime friend and publicist, Howard Bragman, confirmed the death Tuesday. The actor had been plagued with health problems for years, and in February was hospitalized with pneumonia. Bragman declined to confirm reports at the time that McMahon was also battling bone cancer.
Much of his skill was in making other people look good. In an interview with TVGuide.com in October, he recalled how Johnny Carson was known for shyness when they started working together on the Tonight Show in 1962 — a partnership that would last 30 years. But McMahon successfully drew him out.

"He had a privacy, and with the right group around him, he was fine," McMahon said. "As he said to me, he said, 'I'm great in front of 10 million, I'm lousy in front of ten."
McMahon's "Heeeere's Johnny" introduction became one of the most imitated in America — most notably by Jack Nicholson's character in the1980 horror film The Shining. But McMahon himself cheerfully obliged requests that he repeat or alter the phrase, even amending it to "Heeeere's Money" for an ad in which he and MC Hammer invited people to sell their gold for cash.
Ever a congenial pitchman, he lent his name to many a commercial — most strikingly in late 2008, when he delivered a rap for a credit-card agency after several months in which he fought to recover from a broken neck, and to protect his Beverly Hills home from foreclosure.
His health and money troubles were just more reflection of his neighborly, everyman personae. He laughed at Carson's jokes much more than he told his own, and was always happy to join in a gag at his own expense.

But when pressed he could deliver long, cheery anecdotes about show businesses years, service in World War II and the Korean War, and even his colorful family history: In his interview with TVGuide.com, he said mayonnaise was named for a famous ancestor.

Born in Detroit, Mich., in1923, he honed his famous voice as a carnival barker and caller for bingo games. He became a top Philadelphia TV personality in the early 1950s, and was paired with Carson in 1958 to announce Who Do You Trust?
McMahon later hosted several shows of his own, including the game shows Snap Judgment and Concentration, and later Star Search. He also co-hosted, with Dick Clark, the long-running TV Bloopers and Practical Jokes.

He is survived by his wife, Pam, and his children Claudia, Katherine, Linda, Jeffrey and Lex.
Watch our interview with McMahon: 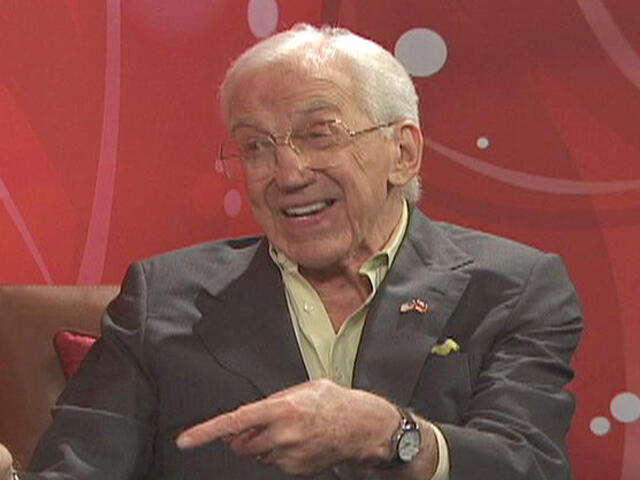