Californication Series Finale: Did Hank and Karen Get Their Happy Ending?

[WARNING: The following story contains spoilers from Sunday's series finale of&nbsp;Californication.&nbsp;Read at your own risk.]Californication's Hank Moody said it best on the Showtime comedy's series finale: "I'm a sucker for happy endings."After seven seasons of breakups, breakdowns, and tons of drug- and alcohol-fueled bad behavior, the love story of Hank (David Duchovny) and Karen (Natascha McElhone) finally came to a close...

[WARNING: The following story contains spoilers from Sunday's series finale of Californication. Read at your own risk.]
Californication's Hank Moody said it best on the Showtime comedy's series finale: "I'm a sucker for happy endings."
After seven seasons of breakups, breakdowns, and tons of drug- and alcohol-fueled bad behavior, the love story of Hank (David Duchovny) and Karen (Natascha McElhone) finally came to a close. Although they began the episode on different pages with regard to their daughter Becca (Madeleine Martin) and her sudden wedding, Hank eventually came around — with a little help from his friends.

During the course of the episode, Hank finally helped his son Levon (Oliver Cooper) learn how to try to have a meaningful relationship and also inspired Charlie (Evan Handler) to fight for Marcy (Pamela Adlon) instead of letting her sleep with Stu (Stephen Tobolowsky) for a million bucks. And after also playing matchmaker between Levon's mom Julia (Heather Graham) and Hank's boss Rick Rath (Michael Imperioli), Hank left his Porsche behind and headed to the airport for one final romantic gesture."Has it been perfect? Hardly," Hank read aloud from his letter to Karen. "Any story with me at the center of it will never be anything less than a big smiling mess. But here's what I know for sure: Our time in the sun has been a thing of absolute f---ing beauty." Hank continued until his letter abruptly ended. "I didn't know how to finish it because it's not over," he said. "It'll never be over as long as there's you and there's me and there's hope." That hope was enough for Karen to let Hank sit beside her on the flight back to New York for Becca's wedding. Although  Karen admits she hasn't been totally won over, she holds Hanks hand and eventually kisses him before the duo flies off into the sunset.But is the man behind Hank Moody satisfied with the show's ending? TVGuide.com chatted with Duchovny to get his thoughts on whether Hank and Karen will actually make it and why he originally envisioned a much more grim ending to the story.

Summer TV: Get scoop on on your favorite returning shows
Were you satisfied with Hank and Karen's ending?
David Duchovny: If Hank wasn't going to die, which is kind of what I wanted, I wanted Hank and Karen to get back together. That was always the heart of the show to me. That was always the Holy Grail of the character. To kind of end up in limbo or to end up apart didn't seem right to me They're not back together, but there's definitely hope. That was always very important to Hank, to have that hope.
Why did you want Hank to die? And was the ending something creator Tom Kapinos ever considered?
Duchovny: I'm sure he considered alternate endings in his own head, but he didn't involve me in that. I always want my characters to die. I think it's a way for me to try to get off shows and things like that. I remember having a discussion with Tom in the second year of the show that Hank should die — he should just get punished, he should have to die. I thought it would be ballsy to kill a character. This is the better ending, the happy ending. Hank was always talking about the happily ever after, so now they've got a shot at it.
If Hank deserved to be punished for his behavior, do you think he made up for any of it by trying to be a father to Levon, the son he never knew he had?
Duchovny: No, I don't think so, I don't think [he needed] to be punished for that. I meant punished for smoking and drinking too much, physically punished. But morally punished — I think Hank punishes himself enough. I think he's been a very interesting, great father to Becca. [He's] definitely not conventional but a guy who has been very honest with his daughter and tried to instill in her the value of honesty and lack of hypocrisy, which I admire. So as difficult as it might have been sometimes to be a steady parent, he certainly wasn't bad all the time. He was an active parent and he was a loving and involved parent. He's less that way with Oliver Cooper's character. He's kind of like an older brother. To me, he'll always be the father of Becca and kind of the unfortunate mentor of Levon.
Speaking of Becca, it seemed fitting that she was, in some ways, the thing once again bringing Hank and Karen back together.
Duchovny: I think it's very significant. There was a scene that I remember playing the year before where Becca's gone and Karen says to Hank, 'With her gone, I don't know what we are anymore, I don't know what we have.' But Hank has always said 'It's not just about Becca.' I think if Becca was not in the picture, Hank would still be in love with Karen. That's part of the romance of the show.

Summer Preview: Check out all the must-see new shows
Do you think Karen's car accident a few episodes earlier re-crystallized Hank's feelings for her after he'd been distracted by Levon and Julia?
Duchovny: Yeah. I think that it's true to life. We walk around thinking that things are going to last forever and we're not going to die. And then sometimes we're smacked into the reality that we're only here for a short time and everybody that we love is so precious because we don't know what's going to happen. It's always good to remind ourselves of it.
Is that what ultimately pushed Hank to make another play for Karen?
Duchovny: No, his feelings for Karen have been remarkably consistent. He's always said, no matter what he was doing or who he was involved with, that he'd drop everything if Karen just said 'Let's do it.' It's tough to go seven years and tough for Tom Kapinos to write their breakups and their getting back together without being either ridiculous or monotonous, or unbelievable. The last couple of years, they cooled off a bit. I think, in a way, maybe it makes sense that their final reunion on-screen is one based solidily of the past that they had. As they hold hands on the plane there, we're thinking back to the past seven years and what's gone on. They have that, and they don't have that with anybody else. That's something.
And yet it was still sort of a "dot, dot, dot" ending. Do you personally believe they will make it work this time?
Duchovny: For me, that was always the happy ending that we were aiming for. If they were to continue in some other dimension, I would think that they are together and that Hank and Karen ride off into the sunset together.

TV's most memorable series finales of all time
Do they move back to New York for good? Hank did leave the Porsche behind.
Duchovny: It seems like it. Hank is back in New York, and that's always where Karen wanted to be. More power to them.
You've said goodbye to a long-running show before on The X-Files. Was it a different experience this time?
Duchovny: I guess the second time around is different because you've been through it once. But it doesn't matter what the show is — ending a long-running show is difficult because you become attached to the people. You become attached to the characters in a way. There's a certain kind of death that happens, where you say goodbye to this thing that was part of your life for many years.
Did you learn anything from the first experience that made it easier  this time?
Duchovny: The X-Files was a real life-changing show for all of us involved. That was strange to say goodbye to because we all went from obscurity to whatever it is we were at the end of it. I also think that having done that kind of intense 22- to 25-episode commitment for eight, nine years, everybody was too tired and ready and to move on. Californication was kind of a perfect job in that we only did 12 episodes a year and we never got tired of it. We never got sick of one another. We used to say it was like summer camp. It's difficult to let go of, but after seven years of playing the same guy, you've pretty much done what you need to do. I'm OK creatively letting go of it. It's just my friends — the crew, the actors, Natascha, Pam, Evan, Maddie — I miss them all.
Fans clamored for years for X-Files movies. This is obviously a different animal, but would you ever be open to a Calfiornication movie?
Duchovny: Oh, sure. That would be great. I think it kind of lends itself to do a movie. Ironically, I know that Tom started writing what became the pilot as a movie script. He had like 60 pages of it and put it in a drawer. ... I guess it always had a bit of a movie sensibility to it.

Of course, you already have your next project lined up: NBC's Charles Manson drama Aquarius. What drew you to that role?
Duchovny: It's set in the '60s — when the '60s get dark. It goes from flower power to Manson. I think that's a real pivotal time in our country's history, and we're kind of stuck going over the ashes of the '60s all the time. It's a decade that we don't leave. There was a revolution in consciousness happening with young people, and obviously there was an ongoing war. There's a lot of questions. There's a lot of stuff about America and about people changing within America.
Is your character struggling with that change?
David Duchovny: Yes. He's a cop from the '50s. He's a real authoritarian figure,so he's got to come face-to-face with what's happening in the '60s himself. So, that's a very interesting journey that I look forward to taking with that guy.
And Manson's just grist for the mill?
Duchovny: Exactly.
Any final thoughts about saying goodbye to our favorite TV hedonist?
Duchovny: [Laughs] Just thanks for watching, whoever did watch. I went to work every day trying to make people laugh. That was always the most important thing for all of us. We were trying to make ourselves laugh and if we made other people laugh when we were doing that, than that's the best job you can ever have.
What did you think of the series finale? Will you miss Hank Moody?
Watch This Tonight: See why Under the Dome is Monday' editors' pick: 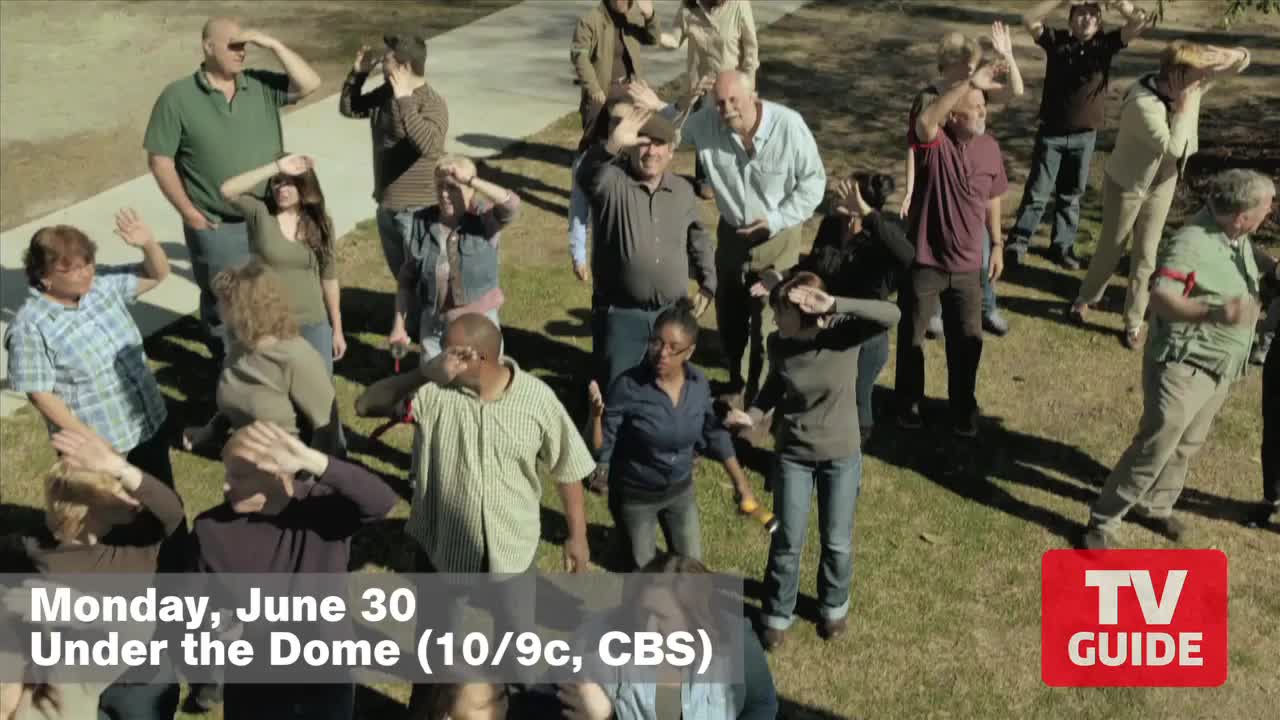